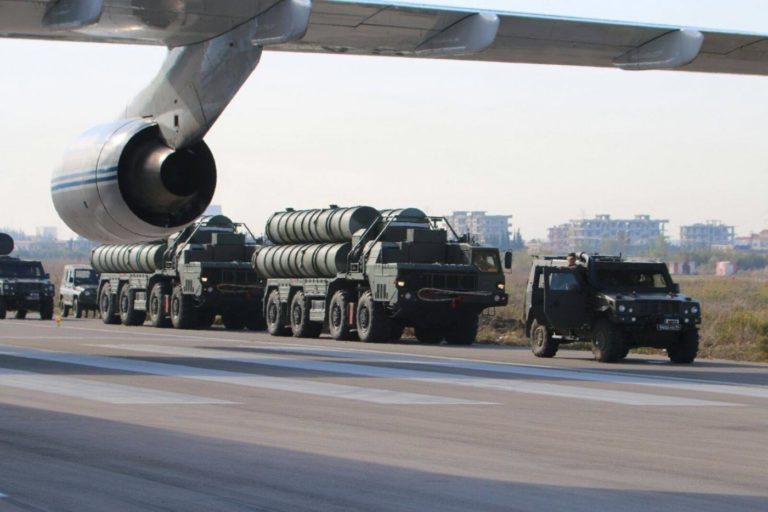 Although Ankara has repeatedly emphasized the S-400 would not be integrated into NATO systems and would not pose a threat to the alliance, US officials maintain that the F-35 program cannot coexist with what is suspected to be a Russian intelligence collection platform.

Kremlin spokesman Dmitry Peskov said on Thursday that Russia intends to deliver another batch of its S-400 Triumf air defense missile system to NATO member state Turkey, a move that could deepen a rift with Washington and trigger new US sanctions.

In an interview with the Greek national commercial station Antenna TV, Peskov made it clear that Russian-Turkish military deals should not be considered as a threat for any country because the system is not offensive, it is defensive.

"We all know that the United States likes to play this game of sanctions, although we know an understanding they [have] never reached their goals," TASS quoted Peskov as saying during the interview issued ahead of Russian President Vladimir Putin's meeting with Greek Prime Minister Kyriakos Mitsotakis in Sochi.

"They have never managed to make a single country change their point of view. But our policy is to be open for cooperation with various countries, especially our partners."

Turkey's interest in building up its defensive cooperation with Russia comes amidst the backdrop of heightened pressure from Washington, which is concerned that the S-400 system may be able to collect information about the capabilities of overhead aircraft, including the American-made F-35 fighter jet – a fifth-generation combat aircraft that is designed to perform ground attack and air superiority missions.

Although Ankara has repeatedly emphasized the S-400 would not be integrated into NATO systems and would not pose a threat to the alliance, US officials maintain that the F-35 program cannot coexist with what is suspected to be a Russian intelligence collection platform. Turkey was excluded from the US-sponsored F-35 Joint Strike Fighter program after Ankara bought the Russian-made air-defense system.

Turkey has long sought to address shortcomings concerning its air defenses. Ankara’s security concerns were exacerbated following US withdrawal of the few remaining Patriot missile platforms stationed along the Turkish-Syrian border in 2015, and later from Turkey’s Incirlik air base. Turkey, which previously attempted to procure the US Patriot missile system to meet its domestic defense needs, was denied multiple times before opting for the S-400 in 2017.

Last year, the US sanctioned Turkey for its purchase under the Countering America's Adversaries Through Sanctions Act (CAATSA) that puts under the threat of sanctions any country engaged in what the US Treasury Department terms a "significant transaction" with Russian defense and intelligence sectors. However, Turkish authorities remained defiant.

As a member of NATO, Turkey’s interest in buying a system from the multilateral bloc's historical nemesis may appear illogical at first but is seemingly due to no other alternatives.

"In the future, nobody will be able to interfere in terms of what kind of defense systems we acquire, from which country at what level," Erdogan said in an interview with American broadcaster CBS News on September 26.

"Nobody can interfere with that. We are the only ones to make such decisions."

The S-400 Triumf, also called the SA-21 Growler in NATO parlance, is reportedly one of the most sophisticated air defense systems in the world, which is designed to target unmanned aerial vehicles (UAVs) as well as ballistic and cruise missiles at a maximum range of 400 kilometers (249 miles) and at an altitude of up to 30 kilometers (19 miles) under intensive enemy fire and jamming. China and India, both clients of the Russian defense industry, own such systems.

Developed in the 1990s, the S-400 has as its main rival the American-manufactured MIM-104 Patriot missile system. Patriot missiles have a maximum range of 160 kilometers, and have been sold to Germany, Greece, Israel, Japan, Kuwait, the Netherlands, Poland, Qatar, Romania, Saudi Arabia, Spain, Sweden and the UAE. After North Korea test-launched ballistic missiles in the Sea of Japan and conducted underground nuclear testing in 2006, South Korea also purchased the Patriot system from Germany. Jordan also purchased several second-hand Patriot systems from Germany.