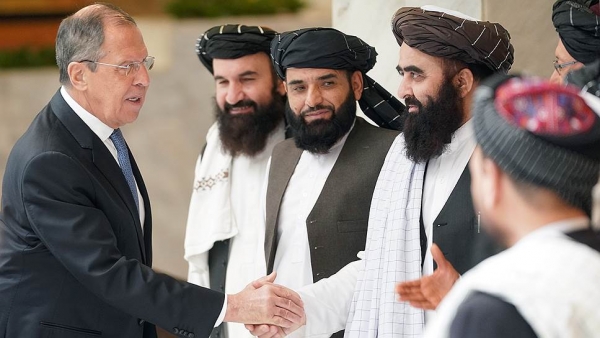 Russian President Vladimir Putin has said that the Kremlin is studying the possibility of removing Taliban from its list of terrorist organizations, but added that such a decision must be made at the United Nations.

Addressing experts and journalists at the plenary session of the 18th annual meeting of the Valdai Discussion Club in Sochi on Thursday, President Putin stressed that this important decision should be taken the same way the decision of blacklisting the terrorist organization was taken.

"Depending on that, we maintain solidarity [regarding the common decisions concerning the Taliban] and will consider a decision to remove them from this list of terrorist organizations," RIA Novosti quoted Putin as saying.

"It looks like we are coming close to this," he added.

Putin's remarks came a day after a Taliban delegation joined the third Moscow Format Consultations, a Russian-led multilateral mechanism established in 2017 to address Afghanistan's concerns and establish cooperation. Following the meeting, the Moscow format members, including Russia, China, Pakistan, Iran, India, Kazakhstan, Kyrgyzstan, Turkmenistan and Uzbekistan, adopted a joint statement on Afghanistan formalizing the position and demands of the member countries to Taliban.

"All of us expect that these people, Taliban, who are undoubtedly in control of the situation in Afghanistan will ensure that the situation develops in a positive fashion," Putin went on to say.

The Russian government added the Taliban to its list of terrorist organizations in 2003 but invited the group for talks in Moscow before it seized the power in Afghanistan.

The security situation in Afghanistan has worsened since US-led forces began withdrawing a few months ago. The Taliban group entered the Afghan capital, Kabul, on August 15, without any resistance, and established full control over the Afghan capital within several hours. The Taliban declared the country an Islamic Emirate of Afghanistan (IEA) - the same name it gave to the country before the US and western allies ousted it following the terrorist attacks on September 11, 2001.

The Taliban’s resurgence has stirred international fears of the possible reconstitution inside the country of terrorist groups such as Al Qaeda and the Islamic State. Meanwhile, the Taliban was prompt to claim that they would pose no threat to any other country.

Many experts on Afghanistan argue that without the permission of the Taliban, such extremist and terrorist groups will not violate the borders of the CIS member states, however, the events that took place in the 1990s suggest otherwise.

Originally rising from the chaos of Syria’s civil war, Islamic State (IS) announced its expansion into Afghanistan in 2015. Turkmenistan, Uzbekistan and Tajikistan all share a long border with Afghanistan, where Islamic State is consolidating and expanding its foothold. Tajikistan, which shares the longest land border with turbulent Afghanistan spanning 1,357-kilometers (843 miles), is more at risk than any Central Asian state.

Russia has an interest in safeguarding the frontiers of Central Asia, the vast region in Asia that lies just south of Russia, as authorities in Moscow are concerned that terror threats emerging from Afghanistan could eventually reach Russia’s doorsteps.