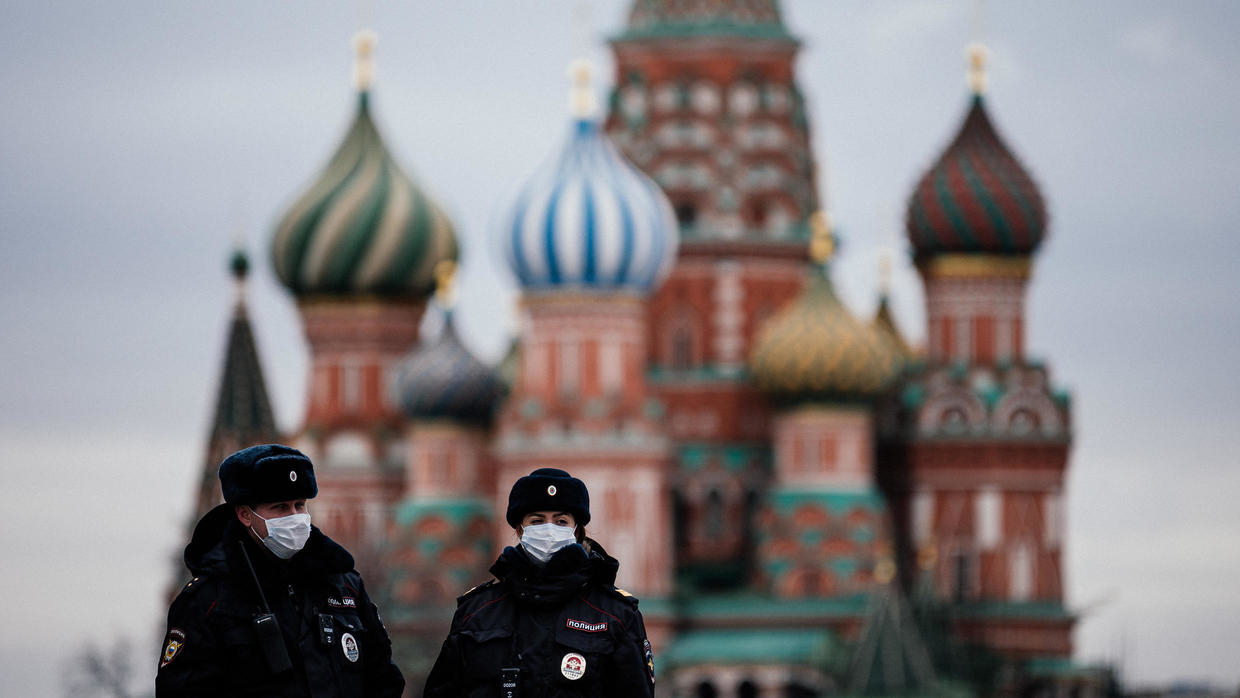 Russian police officers patrol a Red Square in front of Saint Basil's Cathedral in Moscow as the capital and other parts of Russia go into lockdown to curb the novel coronavirus. / AFP

Moscow’s Mayor Sergei Sobyanin has imposed new and tough restrictive measures on the city, in an effort to halt the spread of COVID-19. All residents, regardless of age, are required to not leave their homes.

"All countries of the world are struggling to slow down the growth dynamics in the number of diseases, they are engaged in so-called smoothing so that the number of severely ill patients grows gradually for the health care system to cope," Sobyanin said in a statement posted to his website on Sunday, explaining the need for the imposed restrictions on movement around the city.

Moscow’s 12.5 million people have been ordered to stay home beginning this past Monday, with limited exceptions for emergencies. Residents are permitted to leave their homes for work, if they have to go to work, or to go to the hospital. They are also allowed to shop for groceries and medicine, walk pets within 100 feet of their residences, and take out the trash. The restrictions are considered the strictest yet throughout Russia.

According to Mayor Sobyanin, the authorities will shortly introduce passes to permit movements outside the home in the coming days, with a "smart system" of remote monitoring to ensure compliance.

"With this, the home mode does not limit the rights of citizens to come to the city or leave Moscow," said Sobyanin. "The point is that it is not impossible to move around the city for no good reason."

The lockdown comes after Sobyanin, one of Russia’s most vocal proponents of tough restrictions to counter coronavirus, ordered last week non-essential businesses to close to slow the spread of the illness.

“Movement in the city is down by two-thirds and that’s very good,” Sobyanin said in his statement. “But it’s obvious that far from everyone has heard our message.”

Earlier, Russian authorities called only on Moscow residents over age 65 to self-isolate at home. And just last week, the city government announced the closure of all cafes, shops, parks and other non-essential services. President Vladimir Putin on March 25 announced a non-working week from March 28 to April 5 to force Russians to stay home.

Russian aviation officials grounded all international flights as of March 27 amid the rising toll of coronavirus infections, with exceptions made for special flights that are to evacuate Russian citizens from hard-hit areas throughout the world.

The world's largest country, which borders with China, where the virus first appeared over three months ago, was virtually untouched by COVID-19. But starting from March 10, the number of confirmed cases began to rise. Confirmed infections jumped to 2,777 cases, about two-thirds of them in the Moscow region. According to official data, Moscow now has over 1,880 reported cases of COVID-19 and sixteen
deaths as of Wednesday.

According to data provided by Johns Hopkins Center for Systems Science and Engineering, as of Wednesday, the novel coronavirus infected more than 911,300 worldwide, leading to 45,400 deaths, with the epicenter shifting to the United States where infections and deaths are rising rapidly. The World Health Organization on Tuesday warned that what has become a global public health crisis is "far from over" even in the Asia-Pacific region.