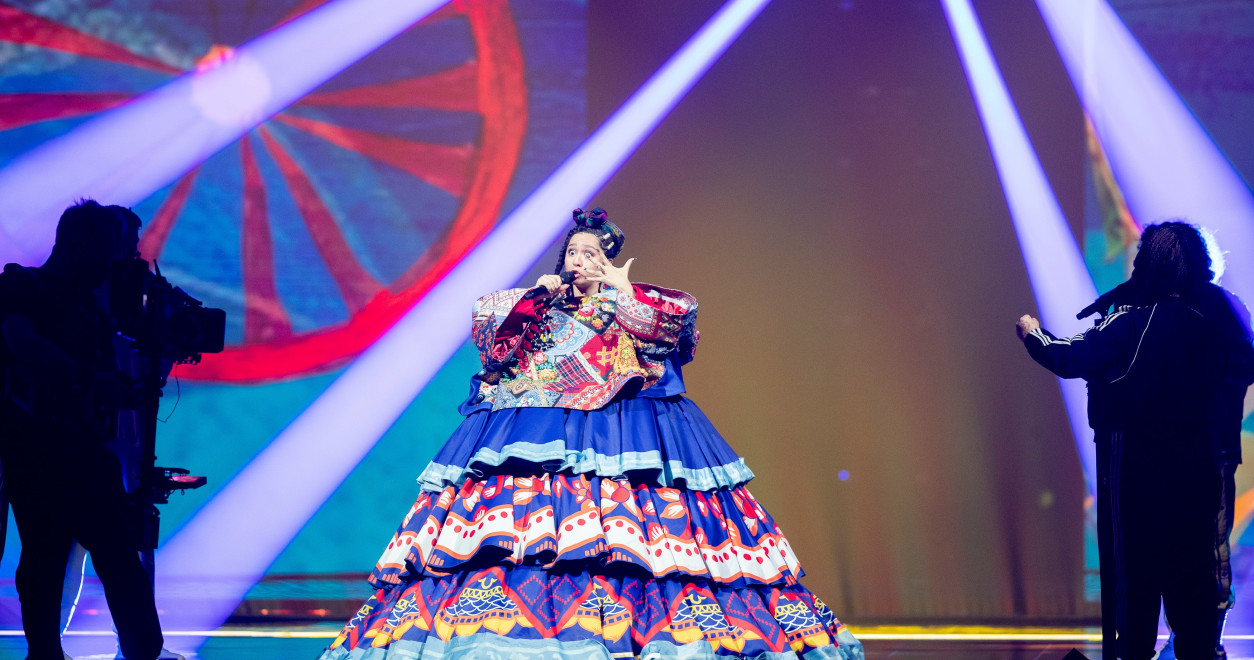 Manizha revealed that the fabric for the dress had been sent from all regions of Russia. / Eurovision.Tv

Russian singer Manizha secured a place in the final of the 2021 Eurovision Song Contest with her song “Russian Woman,” after 16 countries faced off in the first semi-final on Tuesday night.

Tajikistan-born singer and songwriter Manizha Sangin, known professionally as Manizha, impressed the audience when she began her performance wrapped up in a brightly colored, huge Russian doll-inspired, mechanical dress. She further removed it halfway through the song to reveal red overalls beneath.

In an interview with ESC Insight, Manizha revealed that the fabric for the dress had been sent from all regions of Russia.

“We made a call to action to all the women in Russia to ask them, “Come on, girls, we need pieces of your traditional dresses!” the singer said on Tuesday. “Russia is so multicultural and I wanted to show it. All the colors, the textures, the beautiful ornaments. It was my mother’s idea to show it,” she added.

Meanwhile, the lyrics of “Russian Woman” embrace ethnic vibes in harmony with modern patterns, which creates a perfect combo featuring an English verse that says, “every Russian woman is to know, she is strong enough to bounce against the wall.” Long before her Tuesday’s semi-final, Manizha explained that the song she wrote is about the transformation of a woman’s self-awareness over the past few centuries in Russia.

Born in Tajikistan shortly before the collapse of the Soviet Union, Manizha and her family ultimately left the Tajik capital of Dushanbe for Moscow in 1994. Best-known for her innovative and eclectic music, Manizha went viral in 2016 after releasing what she claimed to be the world’s first Instagram music album. In 2020, Manizha became Russia’s first goodwill ambassador to the United Nations Goodwill Ambassador for Refugees.

The singer actively tackles intolerance and racism that particularly affects immigrants from Central Asia. Having combined her music career with pro-refugee activism, Manizha released in 2019 her song “Mama,” which coincided with the launch of an anti-domestic violence SOS app.

Russia has been one of the most successful nations competing at the Eurovision Song Contest in recent years. Alongside Sweden, Russia is a record-holder for the number of top-five finishes since it first joined the competition in 1994. In 2008, Russia’s singer Dima Bilan won the contest for performing the “Believe” song.

This year’s Eurovision Song Contest is taking place in the Dutch city of Rotterdam from May 18-22, with representatives of 39 countries in participation. Rotterdam Ahoy multi-purpose arena is playing a host to the contest.

Along with Manizha, representatives of Norway, Israel, Azerbaijan, Malta, Lithuania, Cyprus, Sweden, Belgium, and Ukraine have also been selected to join the Grand Final show. The second semi-final to select the other ten finalists will take place on May 20. The Grand Final will bring together 20 contestants chosen during the semi-finals and the “Big Five”: France, Germany, Italy, Spain, and the UK. Last year’s winner, the Netherlands, is also automatically through to the final.