Russia Looks To Deter Outsiders, U.S. From Caspian With Construction Of New Naval Base 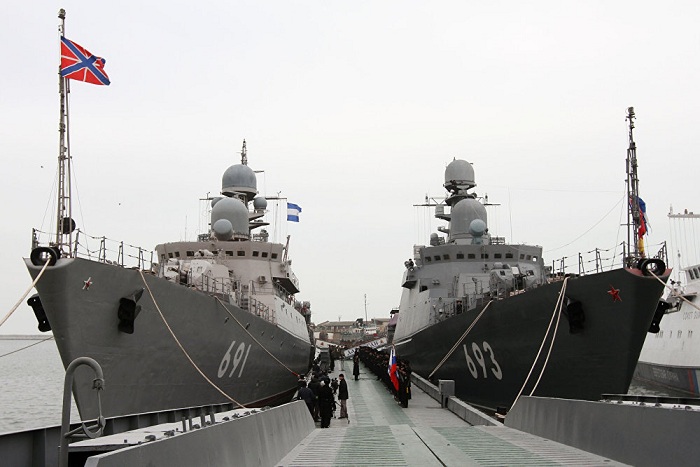 The Tatarstan (left), along with its sister ship, the Dagestan / Newsteam

Russia announced earlier this month that it is planning to build a new naval base in Kaspiysk, along the Caspian Sea, to house its Caspian flotilla. Construction will include improving the harbor, where a small marine detachment is now located; building new docks as well as barracks, ammunition storage facilities, and officers' housing.

“The new naval base will become an important element of the Russian military-political strategy in the Caspian region and in the Middle East,” Russia expert Sergey Mikheyev from the Caspian Cooperation Institute told Caspian News. The facility is expected to be completed by 2020.

Russia’s navy is comprised of a Northern Fleet, Pacific Fleet, Black Sea Fleet, Baltic Fleet, Caspian Flotilla, Naval Aviation, and Coastal Troops, consisting of naval infantry as well as Coastal Missile and Artillery Troops. The Kaspiysk base is expected to be a state-of-the-art facility compared to those that are housing Russia’s Northern Fleet, its Pacific Fleet, the Baltic Fleet and Black Sea Fleet.

Moscow’s move to beef up Russia’s Caspian fleet is seen as a part of its naval doctrine, which outlines activities and equipment upgrades until 2030, as well as responses to economic and geopolitical challenges in the region.

“Third countries are increasingly interested in the Caspian region, which is rich in oil and gas. An alternative energy corridor from Central Asia to the West along the sea-bed and the Caucasus is promoted by Americans and Europeans, but Russia and Iran are coming out against it," Mikheyev said.

Located close to the Middle East and directly adjacent to Central Asia, the Caspian region has become a valuable asset for the Russian military after Moscow joined military operations in Syria in 2015, supporting the country’s President Bashar al-Assad.

The Caspian basin is considered a secure launch site for cruise missiles and a storage depot for Russian ships that are equipped with precision-guided weapons. For example, on October 7, 2015 four Russian warships in the Caspian Sea launched a total of 26 Kalibr SS-N-30A cruise missiles at targets in Syria, which is located nearly 1,000 nautical miles away, according to Defense Ministry data.

Although Russia has military facilities in Syria and military ships in the Mediterranean to strike ISIS targets there, Moscow had chosen to use its assets in the Caspian to demonstrate its capabilities and attack options.

Prior to the disintegration of the USSR in 1991, the Soviet Union’s naval base in Baku, the capital city of Azerbaijan, was its only state-of-the-art naval base in the region. Since the 1990s, Russia’s Caspian Flotilla has used Soviet-era facilities located at the ports of Astrakhan and Makhachkala, both located on the northwest coast of the Caspian Sea.

The Caspian Flotilla consists of missile ships, like the Project 11661K Missile Ships Tatarstan and Dagestan, the Project 21631 Small Missile Ships Grad Sviyazhsk, Uglich, and Velikiy Ustyug, and the Project 12411 Missile Boat Stupinets. Gunships and minesweepers are still based at Astrakhan, and Russia’s main strike force – its 106th Surface Ship Brigade, equipped with missile launchers – is housed at Makhachkala.

Iran has been against the involvement of non-littoral states in the Caspian basin, and has repeatedly stated that its security must be maintained only by its littoral, or bordering, states.

“The Caspian Sea must be the sea of peace and used for economic purposes and the interference of other countries in this region will cause trouble,” Iran’s Parliamentary Speaker Ali Larijani said in a meeting with Azerbaijan’s Defense Minister Zakir Hasanov in Tehran in April.