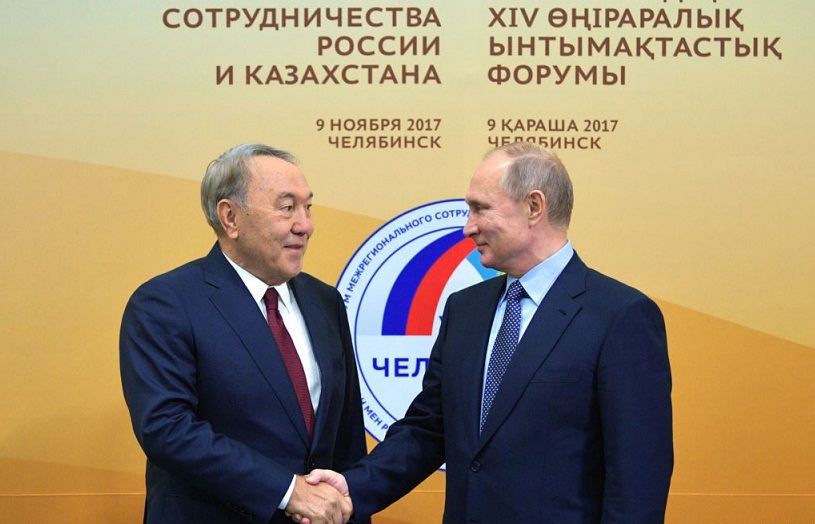 President Vladimir Putin met with his Kazakhstani counterpart Nursultan Nazarbayev in the Russian city of Chelyabinsk to attend the 14th Russia-Kazakhstan Interregional Cooperation Forum on November 9.

“This forum has become an important platform for further expanding the effective interaction of our governments and companies,” President Nazarbayev said while addressing government officials, ministers and business people from the two countries.

The one-day event, headlined “Development of Human Capital,” resulted in the two Caspian neighbors signing 10 agreements related to the delineation of the Caspian Sea in order to exercise sovereign rights to subsoil use, as well as a five-year plan for bilateral cooperation for the years 2018-2023. Russia’s largest oil pipeline manufacturer, Transneft, agreed to provide KazTransOil, Kazakhstan’s major oil transporter, with pumps and equipment used for oil drilling and production.

Russia is ranked as Kazakhstan’s largest trade partner. Kazakhstan’s imports from its giant northern neighbor in the first half of 2017 exceeded the entire volume of the country’s trade with any other country.

“Over the past nine months, the commodities exchange between our countries has increased by 31 percent,” President Nazarbayev highlighted at the Thursday’s forum.

Within the first six months of this year Kazakhstan absorbed more than $5 billion worth of Russian goods, while Moscow imported $2 billion from Kazakhstan. The largest share in mutual deliveries was for mineral products, machinery, equipment and vehicles, chemical products, metals and metal products, as well as foodstuffs and agricultural raw materials.

After the fall of the Soviet Union in December 1991, two newly formed, sovereign states – Russia and Kazakhstan – established diplomatic relations. Today Moscow and Astana are strong partners in regional affairs and are members of several multilateral bodies.

The Commonwealth of Independent States (CIS) was set up to provide a unifying platform for post-Soviet nations, of which Russia and Kazakhstan are members. The Collective Security Treaty Organization (CSTO) was an outgrowth of CIS, which focuses on regional security and was designed to act as a counter-weight to the North Atlantic Treaty Organization (NATO). The Eurasian Economic Union (EEU) was another consequence of CIS, meant to set a uniform trade policy for all five member states, which include Belarus, Armenia and Kyrgyzstan.

Besides geography and geopolitics, Russia and Kazakhstan are culturally linked. Russians are the second-largest ethnic group in Kazakhstan, or 20 percent of its total population of over 18 million, according to the Kazakhstan’s National Statistics Committee. In addition to Kazakh, Russian is an official language of the country, reflecting Astana’s strong ties to Moscow and an appreciation for Russian contributions to what is an ethnically Turkic majority country.

Next year’s Russia-Kazakhstan Interregional Cooperation Forum will be dedicated to the development of tourism in the two countries, and held in the city of Petropavlovsk, located in the northern Kazakhstan.