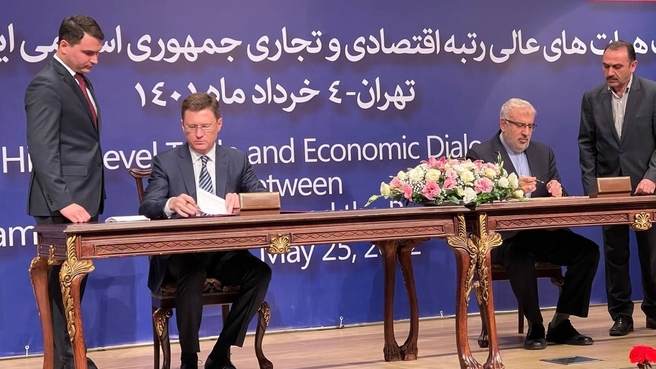 The Russian Deputy Prime Minister Alexander Novak has said that Moscow and Tehran will keep expanding the use of national currencies in foreign trade settlements.

“One of the key topics of discussion was the financial and banking sector - the creation of conditions for mutual settlements and the processing of payments between legal entities and organisations. We agreed to switch to the use of national currencies as much as possible,” Novak said following a meeting of co-chairs of a session of a Russia-Iran bilateral intergovernmental commission, Interfax reported on May 25.

He said that the connection to the Financial Message Transfer System (SPFS) of the Bank of Russia, and the use of the capabilities of the “Mir” and “Shetab” payment systems were on the agenda.

"In the forthcoming period, we are expecting delegations from the Central Bank and the Finance Ministry of Iran to work out final decisions in Moscow," Novak added.

Moscow is also interested in developing the long-delayed North-South Transport Corridor, a rail cargo route from Russia to India that would boost trade from the Caspian and Persian Gulf regions, according to Novak.

For his turn, Javad Owji, Iran's oil minister and co-chairman of the commission, said that a special working group was created under the Ministry of Roads and Urban Development in connection with the North-South corridor, and added that the North-South corridor would likely be put into operation in the second half of this year.

“It will work in the field of improving the Rasht-Astara railway, connecting it with the Garmsar and Injeburun railway lines, as well as accelerating the issues of connecting the railway with ports,” he added.

During the meeting, Owji said that “the essential direction is the banking cooperation by using national currencies and good decisions have been made on these issues”.

The officials discussed the allocation by Russia of the remaining part of the interstate credit line opened to Iran for a total of $5 billion, and also Iran's request for the supply of grain products, wheat and corn.

The amount of trade between Iran and Russia increased by 10 percent in the first quarter, compared to the same period last year. The trade turnover between the two countries grew by 81% in 2021, reaching its maximum level in recent years - almost $4 billion. Now, Iran is seeking to increase this figure to $40 billion.

The officials also discussed the possibility of swapping supplies of oil and gas and an increase in investments for the implementation of joint oil and gas projects in Iran.

"We discussed the issue of supplying energy resources to the north of Iran so that logistically, Iran (since all its production facilities are located in the south) would not need to supply the north of the country. In turn, it will be easier for us to use for sales markets their products that are formed in the south, which is closer to our markets," Novak said.

In the wake of the Russian invasion of Ukraine, Russia faces the prospect of being shut out of Europe, its principal export market for crude oil. According to the head of Iranian Oil, Gas and Petrochemical Products Exporters' Union (OPEX), Seyyed Hamid Hosseini, Russia was trying to take over Iran's markets by offering higher discounts.

He pointed to some reports about Russia giving a $30 discount versus Iran's discount of $20 for customers, adding that "we know Russia-Ukraine war has cut out the route of energy transfers from China to Europe via Russia, which carried 17 shipments per day. Iran can replace Russia in an alternative route from China to Kazakhstan, Turkmenistan and Turkey."