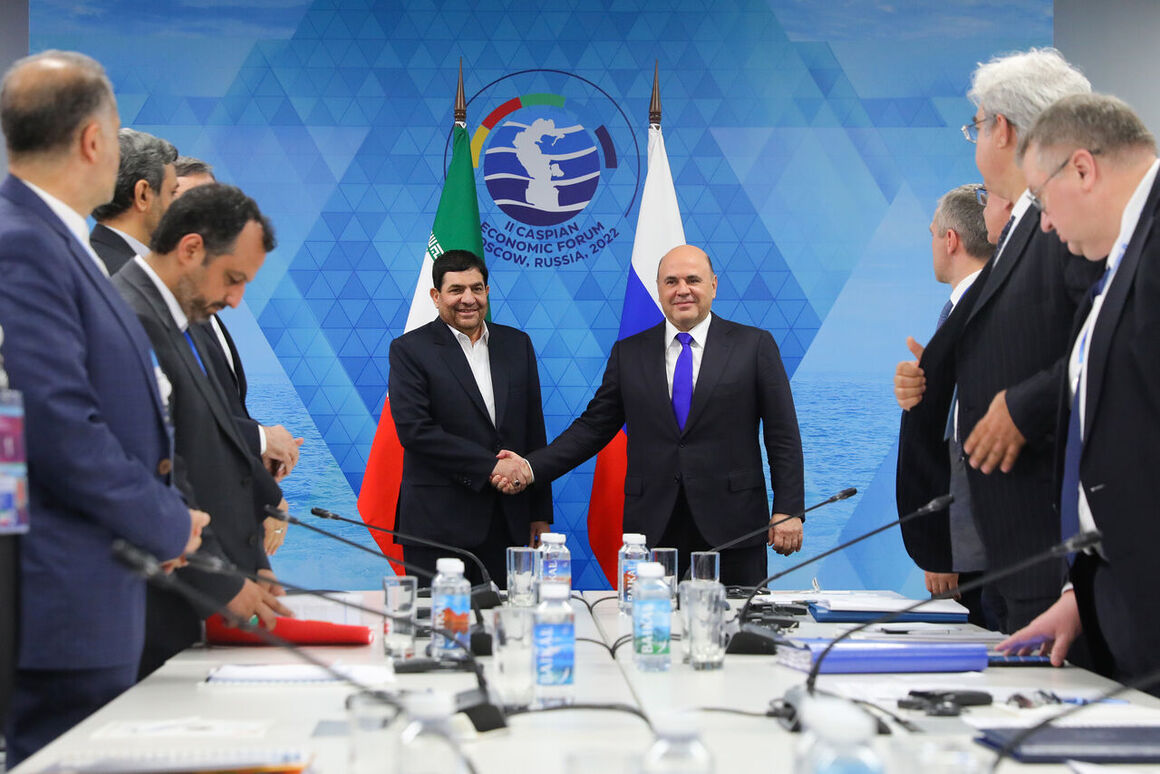 The picture shows a meeting between Iran's First Vice President Mohammad Mokhber and Russian Prime Minister Mikhail Mishustin, on the sidelines of the second Caspian Economic Forum, held in Moscow, on October 6, 2022. / Shana.ir

Russian Deputy Prime Minister Alexander Novak and Iranian Oil Minister Javad Owji have discussed the prospects for cooperation in a number of joint projects, including in the oil and gas industry.

The meeting was held in Moscow on the sidelines of the second Caspian Economic Forum. According to a report by Interfax, the ministers of Russia and Iran touched upon "the prospects for cooperation between the two countries in the global oil and gas market and possible joint projects in Iran, as well as cooperation in the banking and trade sectors."

The existing bilateral agreements worth $40 billion have also been discussed during the meeting.

While addressing the meeting, Minister Novak revealed Russia's plans to conclude an oil and gas swap deal with Iran by the end of the year, and added that "technical details are being worked out - issues of transport, logistics, price, and tariff formation." According to him, these are commercial contracts that must be worked out in detail.

"We believe that at the first stage the amount will be about 5 million tonnes of oil per year, and for gas - up to 10 billion cubic meters," Novak said.

In turn, Minister Owji announced the readiness of Tehran to attract the capital of Russia in Iran's oil and gas sector and touched upon participation in field development plans, swap of petroleum products, and export of petrochemicals.

At the meeting, he listed transportation, transit, energy, and activating the North-South corridor as the most important axes of cooperation between Iran and Russia. He further stressed that establishing a joint bank, electrifying the Garmsar-Inceburun railway, speeding up oil and gas contracts, and creating a free trade zone are among other areas of cooperation that the sides must pursue seriously.

Referring to a meeting of managers of major Russian companies with an Iranian delegation on October 5, Mokhber said that they had discussed investment in oil fields, as well as in the agricultural, financial, banking, transit and transportation sectors, and had decided to work out a timetable for their implementation.

For his part, the Russian prime minister welcomed the presence and activity of Iranian companies in Russia, saying that "the field for joint activity and cooperation is available for our partners in Russia." Mishustin also described the expansion of bilateral relations as "the best response to illegal sanctions" against the two countries.

Iran and Russia are planning to deepen relations in the face of existing tensions with the West. Iran does not officially recognize the sanctions against Russia and continues to develop trade and economic relations with Moscow.