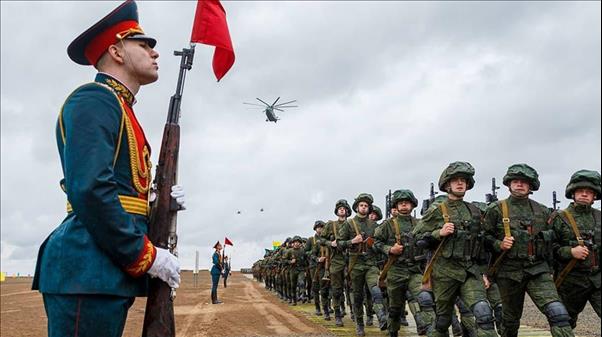 According to Russia’s defense ministry, more than 4,000 training exercises will be held among all of Russia’s military districts in April to check the combat readiness of the armed forces.

Russia has begun nationwide military exercises across the country amid rising tensions in eastern Ukraine.

“In accordance with the training plan of the Armed Forces, control checks have begun in the military command and control bodies, formations and military units,” Defense Minister Sergei Shoigu said Tuesday as part of a conference at Russia’s National Centre for State Defense Control.

According to the country’s defense ministry, more than 4,000 training exercises will be held among all of Russia’s military districts in April to check the combat readiness of Russia’s armed forces. Russia’s Central and Eastern Military Districts will reportedly stage the largest drills.

Meanwhile, the military drills in Russia came at the time of rising tensions in neighboring Ukraine, where fighting has intensified in the eastern Donbas region between Ukrainian forces and armed separatists. Ukraine’s President Volodymyr Zelensky told NATO Secretary-General Jens Stoltenberg in a phone call on Tuesday about Russian forces massing on the border with Ukraine, accusing the Kremlin of whipping up tensions.

Ukraine’s president further added that the most urgent issue in relations with NATO is the possibility of obtaining the NATO Membership Action Plan (MAP).

“We are committed to reforming our army and defense sector, but reforms alone will not stop Russia. NATO is the only way to end the war in Donbas. Ukraine's MAP will be a real signal for Russia,” Zelensky told Stoltenberg, according to a statement issued by Zelensky’s office.

Zelensky also urged NATO member countries to pay more attention to security issues in the Black Sea and to strengthen their military presence in the Black Sea region, bordered by Russia to the northeast.

The White House said on Thursday that Russia had more troops on Ukraine’s eastern border than at any time since the 2014 Ukraine crisis. Russia has not denied the troop movements, but insisted that Moscow has no intentions of threatening Ukraine. Russia’s Foreign Ministry spokeswoman Maria Zakharova accused Ukraine of troop buildup near the line of contact in Donbas, adding that the Ukrainian military operations negatively affect civilians residing in the region.

Kremlin’s spokesman Dmitry Peskov is convinced that Ukraine’s approach to NATO will only inflame the situation in the Donbas region.

"We deeply doubt that this will help Ukraine somehow cope with its internal problem. From our point of view, it will further aggravate the situation,” Peskov told in an interview with RUPTLY.

In addition, any deployment of NATO troops to Ukraine threatens stability near Russia’s borders and may force Moscow to take extra measures to ensure its security, according to the diplomat.

Following his phone conversation with President Zelensky, NATO Secretary-General wrote on his Twitter page that NATO “firmly supports Ukraine’s sovereignty and territorial integrity,” and “remains committed to our close partnership.” However, a NATO official told AFP on condition of anonymity that Ukraine first needs to “focus on domestic reforms” and “develop its defense capabilities in accordance with NATO standards” in order to be considered for membership.

Ukraine and Russia, the two post-Soviet countries, have been at odds since the 2014 crisis in Ukraine's southern and eastern regions. Ukraine accuses Russia of annexing the Crimean region and backing anti-government separatist riots in the country’s eastern regions of Donetsk and Lugansk. The crisis eventually destabilized the Donbas region of Ukraine.

While Kyiv and the West have accused Russia of supporting the separatist regimes in Donetsk and Lugansk with weapons and troops, Moscow has repeatedly denied those claims. Despite a ceasefire that halted full-scale war in 2015, the deadly skirmishes never ceased. The ongoing conflict in eastern Ukraine has so far claimed the lives of some 14,000 people and left as many as 40,000 wounded, according to Kyiv’s estimates.