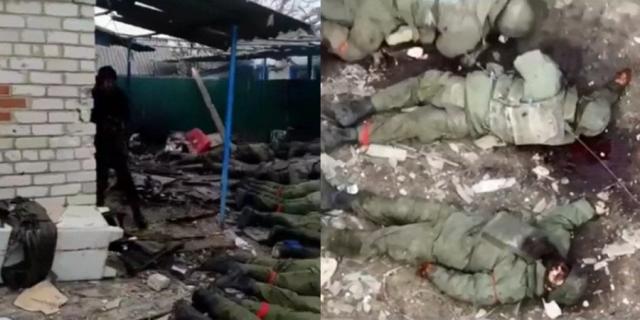 Maria Zakharova, a spokeswoman for Russia's Foreign Ministry, said the video was further evidence of “violation of international humanitarian law, including the Geneva Conventions”.

In a statement issued on Friday, Maria Zakharova, a spokeswoman for Russia's Foreign Ministry, said the video was further evidence of “violation of international humanitarian law, including the Geneva Conventions.”

“We demand that international organizations condemn this egregious crime and conduct a thorough investigation into it,” Zakharova said. “No atrocity committed by Ukrainian military units will remain unpunished.”

The video footage circulating on Russian-language social media reportedly shows 12 Russian servicemen lying down on the ground in Makiivka, a village in the Luhansk region of eastern Ukraine, after surrendering to armed men with yellow armbands. Drone footage depicts the bodies of a number of uniformed soldiers lying on the ground in a farmyard footage, which allegedly matches the video filmed on the ground.

On Saturday, the Russian Presidential Council for Civil Society and Human Rights officially applied to the UN, the OSCE, the Council of Europe, Amnesty International, the International Committee of the Red Cross and other organizations calling for a full investigation of all reported human rights violations in the context of more than ten brutally executed Russian prisoners of war.

On the sidelines of a security forum in Halifax, Nova Scotia, Deputy Prime Minister for European and Euro-Atlantic Integration of Ukraine Olha Stefanishyna said that “it is very unlikely” that the short, edited snippets show what Moscow claims, adding that the Ukrainian authorities will investigate the video footage.

Stefanishyna also said that Ukrainian forces are “absolutely not interested in the execution of anybody” and are under direct orders to take “as many prisoners of war as we can” so they can be swapped in prisoner exchanges with Russia.

“Every potential executed Russian soldier is some Ukrainian that is not able to be exchanged, so the spirit and logic is not there,” Stefanishyna noted.

Meanwhile, Marta Hurtado, a spokesperson for the UN Human Rights Office said the organization was aware of the videos and was looking into them.

“Allegations of summary executions of people hors de combat should be promptly, fully and effectively investigated, and any perpetrators held to account,” Hurtado said.

On February 24, Russia launched an all-out offensive in Ukraine, claiming that the assault was aimed at protecting the people of the separatist-controlled regions allegedly being attacked by the Ukrainian military. The Kremlin explained that the decision was made after separatist leaders of the so-called republics had asked Moscow for military support against Kyiv.

Ukraine and Russia have been at odds since the 2014 crisis in Ukraine’s southern and eastern regions. Ukraine accuses Russia of annexing the Crimean Peninsula — a territory that extends into the Black Sea — and backing anti-government separatist regimes in the country’s eastern regions of Donetsk and Luhansk.

The Moscow-backed referendum held in March of that year allegedly revealed that over 90 percent of Crimea's residents wanted the peninsula to be under Russian control. However, the vote was declared illegitimate by Ukraine, Western countries and the United Nations.