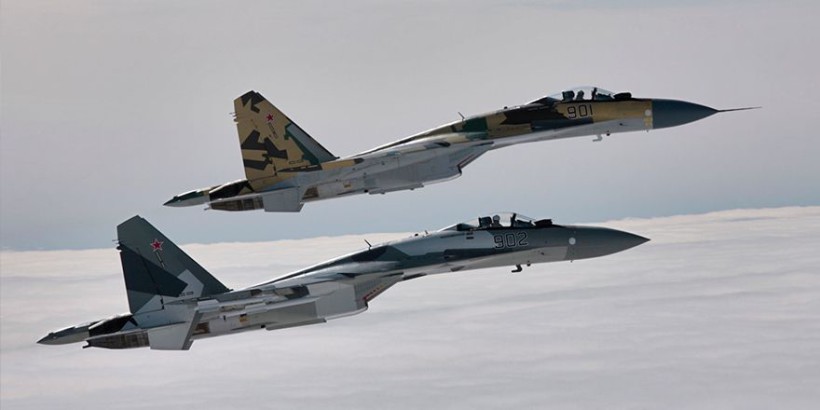 Su-35 is a multi-functional and highly maneuverable combat aircraft belonging to the 4++ generation, with the flight range of up to 4,500 kilometers.

Russia has completed the deployment of Su-35S multi-role fighter jets to Belarus as part of the upcoming joint exercises between the two ex-Soviet countries.

“Multi-role Su-35S fighter jets from the Eastern Military District, dispatched for an inspection of the Union State’s response forces, completed their deployment at airfields in Belarus,” reads a statement issued by the Russian Defense Ministry on Thursday.

The crew of 12 Su-35S fighter planes was sent to Belarus for participation in the Union Resolve 2022 Russia-Belarus joint exercise scheduled for next month. The multi-role fighters landed at the Baranovichi airfield in the Brest region.

The upcoming military drills will run from February 10-20, 2022. According to the country’s defense ministry, the joint exercises aim to assess the ability of military command centers and troops of the Union State to suppress and repel external aggression and fight terrorism.

The troops from Russia and Belarus will practice their joint operations at the Obuz-Lesnovsky, Osipovichsky, Brestsky, Gozhsky, and Domanovsky training grounds. The exercise will also involve the airfields in Baranovichi, Luninets, Lida, and Machulishchi.

Su-35 is a multi-functional and highly maneuverable combat aircraft belonging to the 4++ generation, with the flight range of up to 4,500 kilometers. The fighter is equipped with new radar technology using target detection and digital defense systems of electronic equipment, compatible with all modern types of aircraft weapons. At the same time, the Su-35 utilizes the latest technology and supersonic R-37M air-to-air missiles capable of destroying targets at a distance of up to 300 kilometers.

Belarus — a former Soviet republic — is vital to Russia both economically and strategically. Located between Russia and America’s NATO allies in northeastern Europe, Belarus serves as a buffer against the western military block. Both Russia and Belarus are co-founding members of the supranational Union State, which supposes the gradual establishment of a unified political, economic, military, customs, currency, legal, humanitarian and cultural space.

Last year, the two countries signed an agreement providing for a total of 28 integration “programs,” including a joint military doctrine.

Meanwhile, the arrival of Russia’s jets in Belarus, located north of Ukraine, has only fueled fears of the West that Russia is plotting invasion of Ukraine. Moscow, however, denies such intent.

Some analysts believe that the military drills in Belarus are a move to place more Russian troops near the Ukrainian border. There are reportedly an estimated 100,000 Russian troops already amassed near Ukraine. However, Moscow repeatedly claimed that it was free to move its forces within its borders and had no plans to attack Ukraine. Yet, the western military alliance NATO has been building up its military presence closer to Russia’s borders.

Tensions between Russia and the West have soured in recent years, mostly due to the Ukrainian crisis in 2014 that was followed by Russia’s takeover of Crimea — a Ukrainian territory that extends into the Black Sea. The West has long accused the Kremlin of backing anti-government separatist regimes in Ukraine’s eastern regions of Donetsk and Lugansk — the claims Russia denies.

Western experts believe that Russia’s military activities at the borders of the Baltic States and Ukraine, as well as its increasing military influence in Belarus, pose security challenges impacting the region.

Russia, in turn, has been criticizing the deployment of NATO troops to Eastern Europe, up to Russia’s borders, which threatens its stability and may force Moscow to take extra measures to ensure its security.