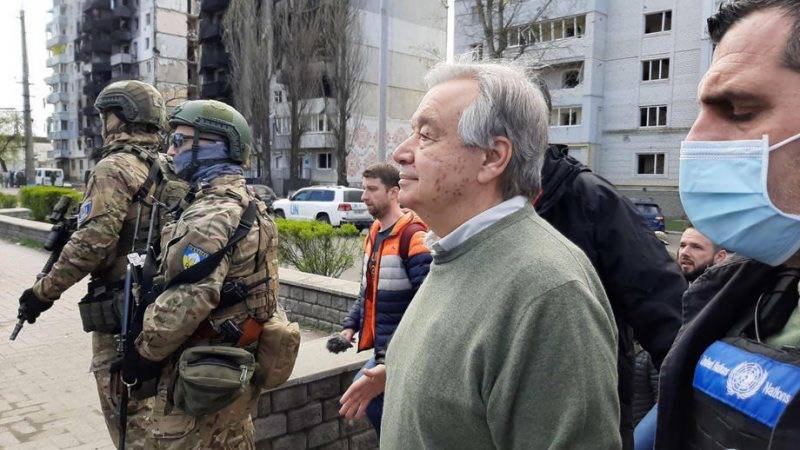 Moscow confirmed it carried out an airstrike on Kyiv but claimed its target was a military one — a plant that manufactures missiles.

Last Friday, in its daily briefing, the Russian Defense Ministry said that it launched “high-precision, long-range air-based weapons” to destroy buildings related to the Artem rocket and space enterprise in the Ukrainian capital.

However, one of Russia’s strikes hit a 25-story apartment building next to the missile factory in Kyiv’s Shevchenkivskyi district, killing one person and injuring ten more people. According to the reports, Vira Hyrych, a 55-year-old Ukrainian journalist for US-funded broadcaster Radio Liberty, who lived in the building, was killed in the attack.

The attack occurred amid the UN chief’s visit to the Ukrainian capital. António Guterres arrived in Kyiv to hold talks with Ukrainian President Volodymyr Zelensky after meeting with President Vladimir Putin on Tuesday. The UN Secretary-General, hoping to de-escalate the war and guarantee humanitarian aid for civilians in Ukraine, said he was “shocked” by the incident.

Ukrainian officials described the attack as a “postcard from Moscow” and an insult to the United Nations.

“Today, immediately after the end of our talks in Kyiv, Russian missiles flew into the city,” President Zelensky said.

“Five rockets. And this says a lot… about the Russian leadership’s efforts to humiliate the UN and everything that the organization represents,” he added.

The targeting of the Ukrainian capital has become the first since Russia refocused its efforts on the eastern Donbas region, consisting of the Donetsk and Lugansk Oblasts. Fighting is continuing in Ukraine’s eastern industrial region as Russia tries to complete the capture of two towns in Luhansk — Rubizhne and Popasna.

According to the Pentagon, Russia aims to attack Ukrainian forces in the Donbas from the north, east, and south out of Mariupol. The city has been encircled since early March and is now mainly under the control of Russian forces. However, a Pentagon official said that the Russian campaign to seize control of the Donbas region is moving slowly and “several days” behind schedule, mainly due to logistical issues and Ukrainian resistance.

On February 24, Russia launched an all-out offensive in Ukraine, claiming that the “military operation” in Ukraine was aimed to protect the people of the separatist-controlled Donetsk and Lugansk, allegedly being attacked by the Ukrainian military. In his televised address, Putin told foreign countries not to interfere, saying it could lead to “consequences they have never seen.”

According to the data compiled by the Office of the UN High Commissioner for Human Rights (OHCHR), at least 3,193 Ukrainian civilians, including 227 children, were killed and 3,353 wounded in the ongoing hostilities.