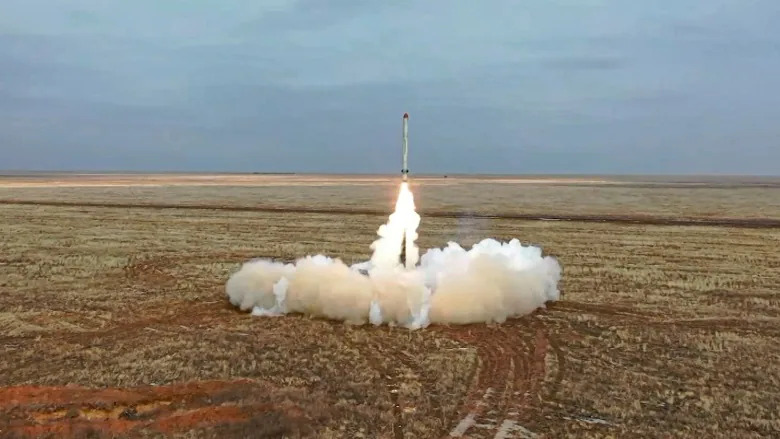 The maneuvers followed a series of escalatory comments and warning from Moscow, suggesting the eight-month war in Ukraine could turn nuclear. / The Associated Press

Russia recently held massive drills of its strategic nuclear deterrence forces, which involved the launching of ballistic and cruise missiles as tensions between Moscow and the West rise over the conflict in Ukraine.

According to a statement issued by the Kremlin on Wednesday, Russian President Vladimir Putin observed drills from the Kremlin’s situation room.

“Under the leadership of the Supreme Commander-in-Chief of the Armed Forces Vladimir Putin, a training session was held with ground, sea and air strategic deterrence forces, during which practical launches of ballistic and cruise missiles took place,” the statement reads.

Russian Defense Minister Sergei Shoigu reported to Putin that the exercises were intended to simulate a “massive nuclear strike” against an unspecified enemy, retaliating for a nuclear attack on Russia.

As part of the drills, an RS-24 Yars land-based intercontinental ballistic missile (ICBM) was test-fired from the country’s northern Plesetsk launch site. Also, the Sineva ballistic missile was launched from a nuclear submarine in the Barents Sea in the Arctic, while Tu-95 strategic bombers launched cruise missiles at practice targets.

According to the Kremlin’s statement, tasks were fully completed and all missiles hit the designated targets.

The drills take place in Russia on an annual basis to train the country's nuclear forces and demonstrate their readiness. A previous exercise, involving military equipment and personnel of Russia’s Aerospace Forces, Southern Military District, Strategic Missile Forces, Northern and the Black Sea fleets, was held in February, just days ahead of Russia’s invasion of Ukraine.

The maneuvers followed a series of escalatory comments and warning from Moscow, suggesting the eight-month war in Ukraine could turn nuclear.

Russia has been accusing Ukraine of plotting to detonate a radioactive device commonly known as a “dirty bomb” in a false flag attack to blame Russia. A dirty bomb is a dispersion device containing conventional explosives, such as dynamite, combined with radioactive material – possibly uranium, which is scattered by the force of the blast. Moscow even formalized the allegations in a letter to the United Nations.

Kyiv, in turn, has vehemently denied the claims, arguing that the Kremlin’s nuclear rhetoric is part of a plan to blackmail Ukraine’s western partners, discourage them from providing further weaponry to Kyiv and accept a peace deal on Russia’s terms.

Russian authorities have repeatedly cautioned the West that any attack on Russia could provoke a nuclear response. President Putin, who rules the world’s biggest nuclear power, first hinted at the possibility of using nuclear weapons at the start of what he calls a “special military operation” in Ukraine, warning that western interference would reap “consequences they have never seen.”

On February 24, Russia launched an all-out offensive in Ukraine, claiming that the assault aimed to protect the people of the separatist-controlled regions who were allegedly being attacked by the Ukrainian military. The Kremlin explained that the decision was made after separatist leaders of the so-called republics had asked Moscow for military support against Kyiv.