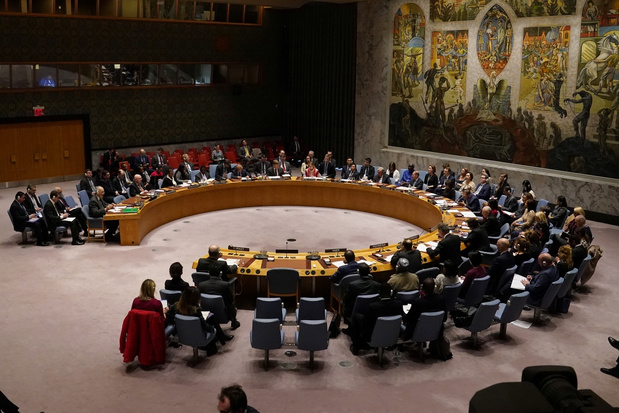 For six years, the Security Council annually authorized the cross-border aid mechanism to Syria from four border crossings, two in Turkey, one in Jordan and one in Iraq. / Reuters

Moscow has prepared a new draft resolution, to be voted on by member countries of the United Nations Security Council, which would authorize just one crossing point from Turkey to Syria for a year.

"We have put in blue a draft Security Council resolution which will allow cross-border humanitarian deliveries to #Idlib in #Syria through crossing point Bab-el-Hawa for one year," Russia's First Deputy Permanent Representative to the United Nations Dmitry Polyanskiy said in a Tweet. "This border-crossing accounts for more than 85% of total volume of operations."

Russia, Syria’s closest ally, circulated the draft resolution after it joined another UNSC permanent member China on Tuesday in vetoing an attempt to maintain aid deliveries through two Turkish border crossing points, precisely Bab al-Salam and Bab al-Hawa, for a year. The remaining 13 members voted in favor of the resolution, drafted by Germany and Belgium. In turn, Russia proposed only one crossing point at Bab Al-Hawa for just six months instead, but it failed with just four "yes" votes on Wednesday. Seven countries, including Germany, France, the U.K. and the U.S. voted against the proposal, while further four abstained.

"We categorically reject claims that Russia wants to stop humanitarian deliveries to the Syrian population in need," Polyanskiy tweeted on Friday. "Our draft is the best proof that these allegations are groundless."

For six years, the Security Council annually authorized the cross-border aid mechanism to Syria from four border crossings, two in Turkey, one in Jordan and one in Iraq. Cross-border assistance serves as a lifeline for millions of civilians in northwest Syria. In January, Moscow, Syria’s closest ally, succeeded in having the crossing points reduced from four to two and in limiting the authorization to six months instead of a year. Russia believes that UN authorization without consent from the Syrian government, who wants all aid to go through Damascus, constitutes a violation of Syrian sovereignty.

"Our Western partners should seize this opportunity and support our draft that would provide for extension of CB humanitarian assistance to Syria while adapting it to the situation on the ground. If they block our compromise proposal they will be responsible for the consequences," Polyanskiy added.

Mark Lowcock, the U.N. humanitarian chief, voiced his concerns over the humanitarian situation in Syria in late June, saying that "Syria’s health system is not prepared for a large-scale outbreak."

Syria has registered 256 confirmed cases of the virus and nine deaths, including six cases and one fatality in the northeast. But the government has administered only 8,000 diagnostic tests in a country of about 15 million people. Financial crisis of the nine-year conflict only exaggerates the situation.

What seems like a never-ending conflict in the war-torn Middle Eastern country has devastated its economy and population. According to the London-based Syrian Observatory for Human Rights, an estimated 560,000 people have been killed in the conflict, and more than half of the Syrian population has been displaced either internally or throughout the world.

Russia launched a military air campaign in Syria in 2015 at the request of embattled Syrian President and ally Bashar Al Assad to help Damascus recapture parts of the country from rebels and fight terrorist organizations such as the Islamic State (IS). Due to Russia's military assistance, Assad's regime has won back control over most of the country and shored up its hold on power.