Russia Celebrates Victory Day With Massive Show Of Military Might 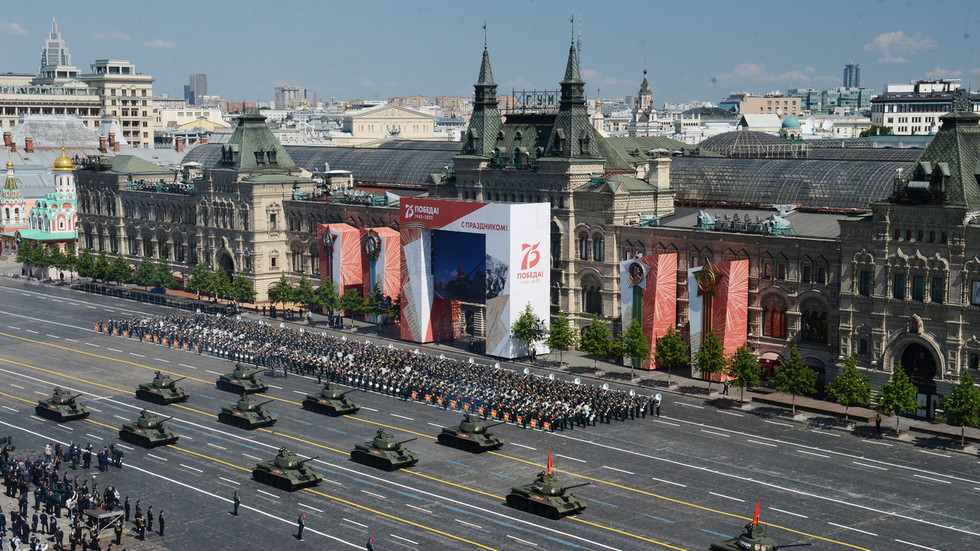 A military parade is traditionally held on May 9 every year in Moscow's Red Square to mark the anniversary of the Soviet Union's victory, as well as showcase the newest military equipment produced by Russia. / Evgeny Biyatov / Reuters

Today, Russia is celebrating the 75th anniversary of the Soviet Union's victory over Nazi Germany and an end to the Great Patriotic War, otherwise known as World War II, which claimed the lives of 27 million people from the USSR.

Celebrations kicked off at 10am today in Red Square, where over 14,000 troops, 234 armored vehicles, and 75 aircraft have been showcased in the massive military parade led by Commander-in-Chief of the Russian Land Forces Colonel General Oleg Salyukov.

When the Banner of Victory and the Russian flag appear in Red Square, Salyukov has reported to Defense Minister General of the Army Sergei Shoigu that the Moscow garrison troops are ready for Victory Day. Then, Shoigu and Salyukov have ridden Aurus cabriolets, which were created specifically for the event by local brand FSUE NAMI, to greet the troops.

A military parade is traditionally held on May 9 every year in Moscow's Red Square to mark the anniversary of the Soviet Union's victory, as well as showcase the newest military equipment produced by Russia. This year's celebrations were postponed to June 24 because of the Covid-19 pandemic.

In addition, the foreign dignitaries who arrived for the Victory parade include representatives from several other countries, including the heads of Belarus, Kazakhstan, Kyrgyzstan, Moldova, Serbia, Tajikistan and Uzbekistan. Chairman of the CIS Executive Committee Sergey Lebedev, Chairman of the Board of the Eurasian Economic Commission Mikhail Myasnikovich and Secretary General of the Collective Security Treaty Organization (CSTO) Stanislav Zas also attended the massive parade on Wednesday.

A show of military prowess both on the ground in Red Square and in the skies over Moscow has become the centerpiece of Russia’s rescheduled Victory Day celebrations.

The parade provided an opportunity for the armed forces to show off some of their historical weapons, including 11 legendary T-34-85 tanks, followed by seven SU-100 self-propelled artillery guns, which opened the procession of Russia's heavy armored military hardware, according to TASS.

The flyover of 75 aircraft - both planes and helicopters - that included heavyweights such as the iconic Tu-95 and Tu-160, the world’s largest Mi-26 military transport rotorcraft accompanied by four Mi-8 multirole gunships and three groups of five Mi-35 transport/attack helicopters, Ka-52 ‘Alligator’ reconnaissance/strike and Mi-28 helicopters culminated the parade.

The parade concluded with the display of six Su-25 attack aircraft that exhausted special fumes in the colors of the Russian national flag.