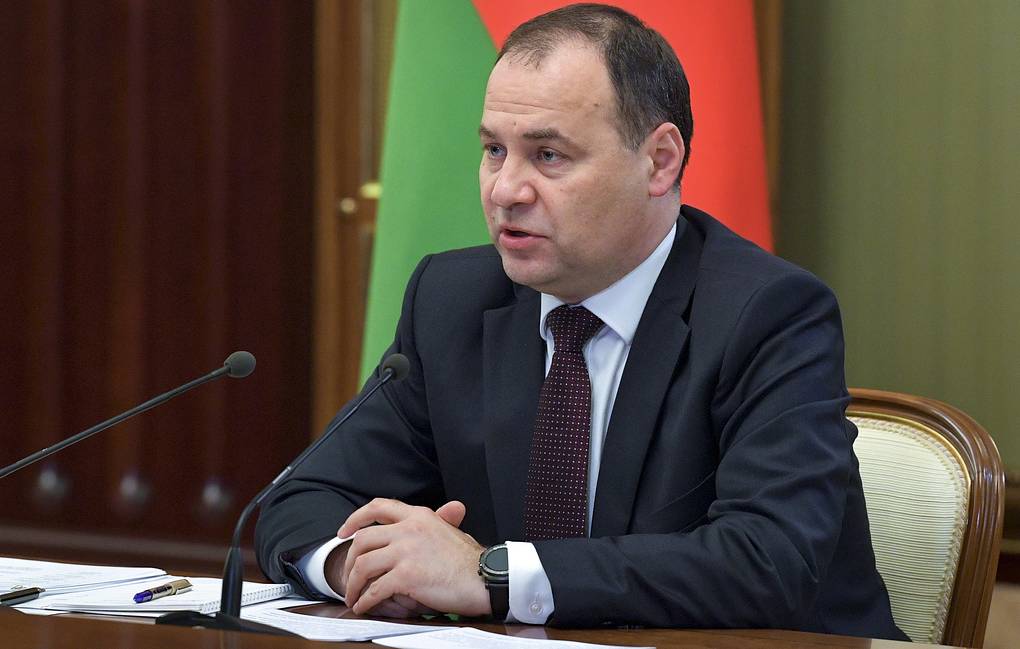 Belarusian Prime Minister Roman Golovchenko made a statement during his visit to the Belaruskali potash mining company, saying that Belarus has secured favorable terms in negotiations with Russia on deliveries of oil and natural gas in 2021. / Alexander Astafyev / AP

The Russia-Belarus energy dispute moved closer to resolution as Moscow and Minsk agreed on the terms of Russian oil and natural gas supplies to Belarus for next year.

On Tuesday, Belarusian Prime Minister Roman Golovchenko made a statement during his visit to the Belaruskali potash mining company, saying that Belarus has secured favorable terms in negotiations with Russia on deliveries of oil and natural gas in 2021. The details of the agreement, however, have not been disclosed.

"As always, negotiations of any kind are accompanied by certain bargaining over the terms. But in general, it all ended for Belarus on good, beneficial terms," Golovchenko was quoted by Sputnik Belarus as saying.

Relations between Moscow and Minsk, have soured amid a row over oil supply since January 1, after the two sides failed to agree on terms for 2020. As a result, Russian oil flows to Belarus have slowed to a trickle, prompting Belarus to search for alternative sources of oil to compensate for the shortage and to nurture ties with the West. Minsk has boosted crude oil shipments from other producers such as Saudi Arabia, Norway, Azerbaijan and the US. Additionally, in a bid to move away from such dependence, Lukashenko announced that Belarus had already started developing new oil and gas infrastructure, which is set for completion in 2025.

Meanwhile, the disagreement over the price of the Russian natural gas supplied to Belarus has been ongoing since 2016. Although the dispute was settled in April 2017 when Gazprom - the world's largest supplier of natural gas, which accounts for approximately 16 percent of global production - provided a discounted price for Belarus equal to $129 per a thousand cubic meters in 2018 and $127 in 2019, Belarus saw the price as too high, given the turmoil in the global energy market.

The differences over the payments for energy supplies were settled during a meeting of Ambassador Extraordinary and Plenipotentiary of Belarus to Russia Vladimir Semashko and Belarusian Energy Minister Viktor Karanik with Chairman of the Gazprom Management Committee Aleksei Miller on December 24 in St. Petersburg, when the sides reportedly signed a protocol on prices for Russian natural gas supplied to Belarus in 2021.

Speaking about natural gas arrangements in his interview with the Belarus 1 TV channel on Sunday, Golovchenko made it clear that the price Belarus will pay is very comfortable and virtually on par with 2020 levels.

"If we talk about the current level of prices on international spot markets, Belarus buys gas virtually at half of the current world prices," Belta quoted Golovchenko as saying.

Since the country does not possess domestic oil or gas reserves, Belarus depends heavily on natural gas from the country's close ally Russia, who annually delivers 20 billion cubic meters (bcm) of its natural gas to Minsk.

Additionally, Belarus - a traditionally close ally to Russia - serves as an important transit route for Russian oil and gas to Europe, its main gas consumer, delivering 20 percent of Russian gas through its territory. Russia supplies nearly 39 bcm of its natural gas to Europe, mostly to Germany, via the Yamal-Europe gas pipeline crossing Belarus.

Meanwhile, the volume of oil refining at Belarusian refineries in 2021 will be determined by economic feasibility, according to Golovchenko. However, the Russian side is ready to supply as much as required.

"If it is profitable for us to refine 18 million tonnes, we will refine it. It will depend on the situation on the market," he explained.