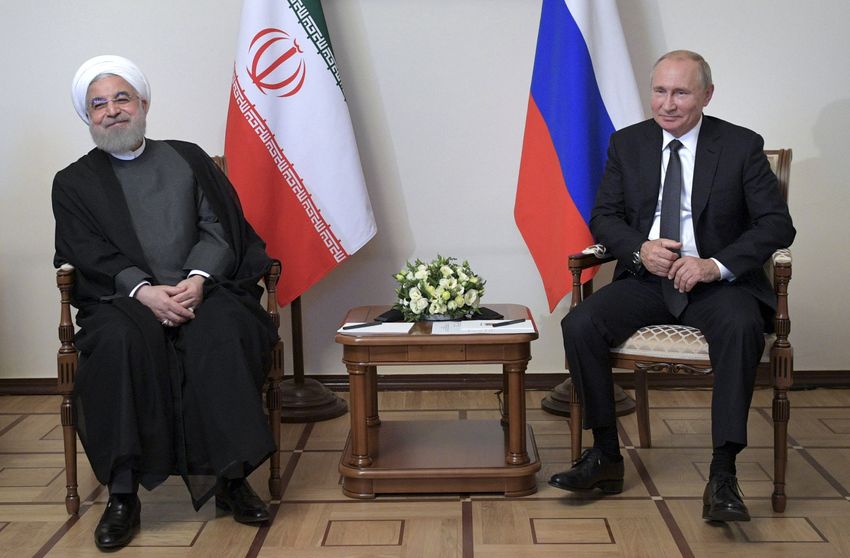 The Iran nuclear deal, formally called the Joint Comprehensive Plan of Action, is not dead just yet. Earlier this week, Iran’s President Hassan Rouhani met with his Russian counterpart Vladimir Putin in Yerevan, on the sidelines of the Eurasian Economic Union (EAEU) Summit to discuss the fate of an agreement inked over four years ago.

“The success of this agreement requires the full implementation of all its signatories’ commitments and the support of all countries for its implementation,” Rouhani said alongside Putin, according to the official website of the president of Iran.

Rouhani underscored Moscow’s role as a key player in preserving the deal, which the United States ejected out of in May 2018. Hit hard with crippling U.S. sanctions, Tehran is hoping the remaining parties to the deal – Russia, the United Kingdom, France, China and Germany – take more actions to save it.

Agreed to during the administration of U.S. President Barak Obama, the deal was designed to limit Iran’s capacity to produce weapons-grade nuclear fuel for specified number of years, in exchange for cash that had been frozen and the lifting of nuclear-related sanctions.

But in May, Iran has stopped honoring certain commitments on its end regarding limits on nuclear fuel permitted under the JCPOA, after the Trump administration, one year earlier, pulled out from the deal and targeted hard Iran’s oil and gas sectors.

While in Armenia on Tuesday, President Putin reiterated his support for the nuclear deal and stressed that Moscow is making every effort to get the remaining signatories to continue cooperating and help save it from total collapse.

Also discussed in Yerevan, according to reports, was the Hormuz Peace Endeavour initiative, abbreviated as HOPE, which is aimed at promoting peace and prosperity for residents in countries along the Strait of Hormuz in the Persian Gulf – an epicenter of mounting tension between Iran and the West.

“Sustainable security and peace in the Persian Gulf, Sea of Oman and the Strait of Hormuz can only be achieved with the participation of regional states,” Rouhani stressed when speaking with Putin.

The United States has been calling for a coalition of navies to protect their nations’ ships that pass through the Strait of Hormuz – a vital waterway through which much of the world’s oil passes. But Rouhani proposed an alternative at the United Nations General Assembly last week, citing UN goals and principles such as mutual respect, dialog and understanding and, the “two fundamental principles of non-aggression and non-interference in the domestic affairs of each other.”

“The initiative encompasses various areas of cooperation such as security, energy, freedom of navigation and the free transfer of oil and other resources to and from the Strait of Hormuz,” Rouhani said to Putin.

At Tuesday’s summit, the two presidents emphasized strengthening Tehran-Moscow relations in all areas of interest. President Putin welcomed the start of Iran's official cooperation with the Eurasian Economic Union, calling it a ground for further regional integration and development.

The Eurasian Economic Union, which groups Russia with Armenia, Belarus, Kazakhstan and Kyrgyzstan into a common market, is a trade block, which seeks to remove barriers to the free movement of goods, services, capital and labor.