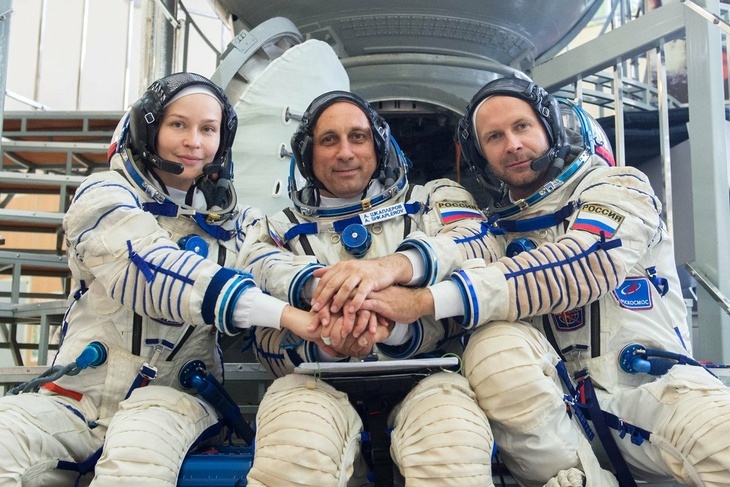 After 12 days aboard the space station, the Russian filmmaking duo will return to Earth with Novitskiy, who will be wrapping up a 190-day mission.

Russia is set to claim another record in space as its Roscosmos space agency gears up to launch a two-person film crew into space to film the first full-length movie around 250 miles above Earth.

After three months of rigorous training, actress Yulia Peresild and movie director Klim Shipenko were approved to join a mission to the International Space Station, along with veteran cosmonaut Anton Shkaplerov. The main crew for the Russian space film will be on board the Soyuz MS-19 craft from Baikonur cosmodrome in Kazakhstan at 11:55 Moscow time on Tuesday.

The spacecraft will reach orbit within roughly nine minutes, and it will take about three hours and seventeen minutes to reach the ISS.

The 38-year-old director and one of Russia's most famous actresses will spend 12 days in orbit filming a segment of a new fictional movie titled "Challenge." The space drama centers around a surgeon launched on short notice to the space station to save a crew member who suffers a heart condition. In the film, the doctor performs heart surgery in zero gravity to save the life of a cosmonaut.

Both Shipenko and Peresild had to go through a three-month training program to prepare for the mission, which included learning the principles of space survival, performing zero gravity, centrifuge, and vibration tests, and practicing for in-flight emergencies.

Speaking at a news conference at the Russian launch facility in Baikonur, Peresild admitted that the training for the mission was grueling but described it as a once-in-a-lifetime opportunity.

"It’s a miracle, an incredible chance," she said. "We worked really hard and we are really tired, even though we stay in good spirits and smile," the 37-year-old actress confided. "It was psychologically, physically and morally hard."

"The guys showed themselves in the best way," said Shkaplerov. "It is evident that they have a calling, and they want very much for this space experiment under the name Challenge to be implemented at the best level, the best international level."

Seasoned astronaut Shkaplerov, who will mark his fourth spaceflight as he pilots the spaceship on Tuesday, will also accompany the pair as an actor in the film. Shkaplerov admitted in an online news conference with TASS that the cosmonauts struggled to get into their characters for the film.

"It is somewhat difficult for us, unprofessional actors," Shkaplerov said on Monday. "But we are doing our best. I hope, we will do it."

Although the film director had altered the script now and then for his convenience, the job still appeared to be difficult, said Shkaplerov.

"I have never done anything of the kind," he confessed. "It is not to learn a verse by heart, as we did at school. It is about memorizing a text in prose and performing all the time."

After 12 days aboard the space station, the Russian filmmaking duo will return to Earth with Novitskiy, who will be wrapping up a 190-day mission.

Shkaplerov will stay on the station and return to Earth in March or April along with Dubrov and Vande Hei, who would have spent nearly a year in orbit since its launch on April 9.

The Russian space agency and Russia's Channel One unveiled their plan to film a feature movie in space last November, a few months after NASA's administrator Jim Bridenstine confirmed that the agency was working with US actor Tom Cruise to film a movie aboard the ISS.

The iconic Mission: Impossible franchise star has partnered with Elon Musk's SpaceX and NASA for a new project that was supposed to bring the actor to space. Although both Cruise and director Doug Liman have scheduled their flight to the ISS for this October, there has been little development on the project.

Dmitry Rogozin, head of the Russian state space corporation Roscosmos, who will co-produce the first-ever movie filmed in space, was a key driving force behind the project. In an interview with Komsomolskaya Pravda, Rogozin described making the world's first feature film in space as a chance to raise the nation's space prestige.

"Movies long have become a powerful instrument of propaganda," he said in June, claiming that the new film will assist counter what he described as Western efforts to "humiliate the Russian space sector."