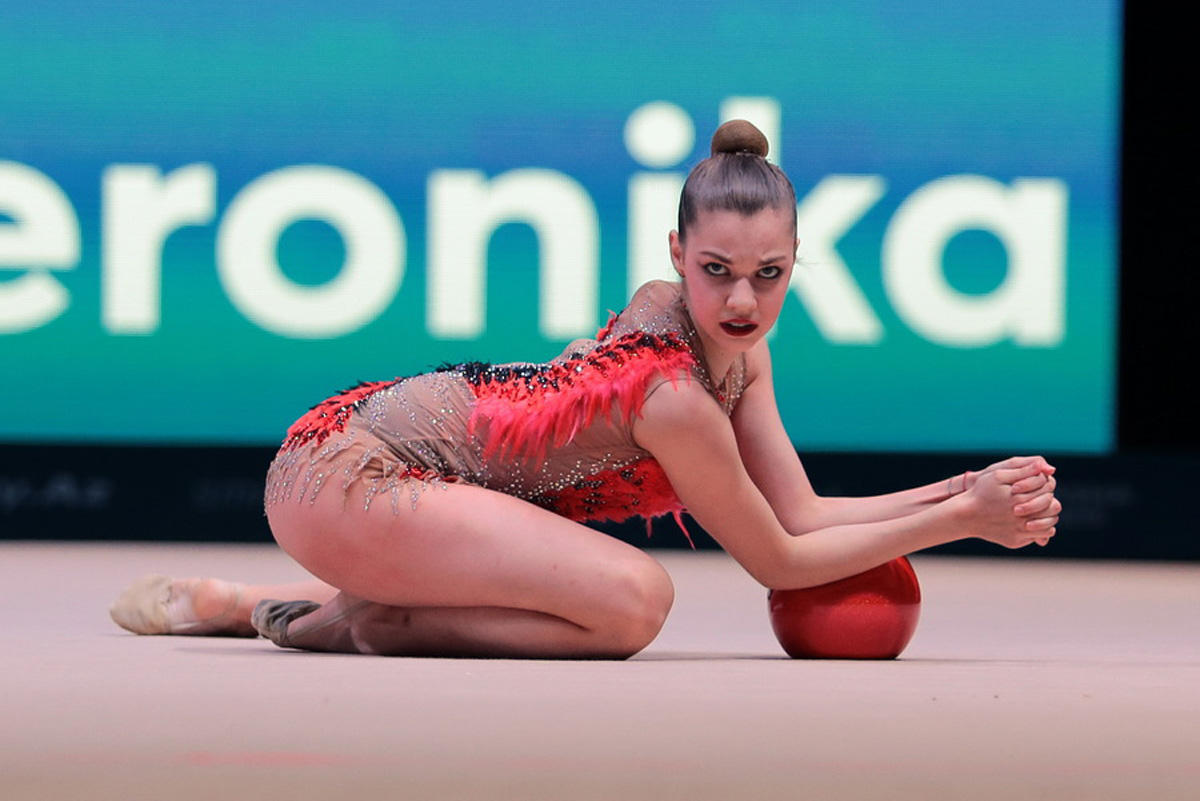 As the home team, Azerbaijan is represented by the gold medalist from the 2017 Islamic Solidarity Games, Zohra Agamirova; and Veronika Hudis in the individual program. A team consisting of Madina Asadova, Laman Alimuradova, Seljan Hajizade, Milana Akbarova, Farida Safiyarzade has been performing in group exercises. / Trend News Agency

The four-day event, which began on Thursday and is co-organized by the European Union of Gymnastics and Azerbaijan Gymnastics Federation, features nearly 200 athletes from 35 countries who are competing for gold, silver and bronze medals in rhythmic gymnastics.

Thursday came and went with a mesmerizing opening ceremony in the National Gymnastics Arena that included a performance of the national anthem by Azerbaijan’s honored artist Sevda Alakbarzade. The day continued with a theatrical gymnastic show entitled “Our Superheroes.”

“As always, the Azerbaijan Gymnastics Federation today showed the organization of the tournament at the highest level,” Slovak gymnast Ksenia Kilinanova told the reporter from Vestnik Kavkaza. “I did not expect such support, and it is very nice - I feel at home.”

Being an art and a sport, gymnastics includes two competition categories: individual and group competitions. As the home team, Azerbaijan is represented by the gold medalist from the 2017 Islamic Solidarity Games, Zohra Agamirova; and Veronika Hudis in the individual program. A team consisting of Madina Asadova, Laman Alimuradova, Seljan Hajizade, Milana Akbarova, Farida Safiyarzade has been performing in group exercises.

Russia won another gold on Saturday when its junior team clinched the all-around honors with a tally of 44.925.

Rhythmic gymnastics requires that athletes compete on a special gymnastics floor that measures 13 x 13 meters (42.65’ x 42.65’) with performances choreographed to music. Group exercises usually consist of five people and one reserve gymnast who will participate in one of the two exercises.

The routine in rhythmic gymnastics includes five apparatuses, such as a hoop, a ball, clubs, a ribbon and a rope. According to the rules, senior gymnasts must perform with all these apparatuses except the rope, while juniors alternate among these apparatuses every two years.

For the first time in its history, Azerbaijan was chosen to host the joint European Championships in two gymnastics disciplines, namely Rhythmic and Aerobics Gymnastics. This is the fourth time Azerbaijan has held the European Rhythmic Gymnastics Championships. Aerobic gymnastics athletes will compete in Baku from May 24-26.