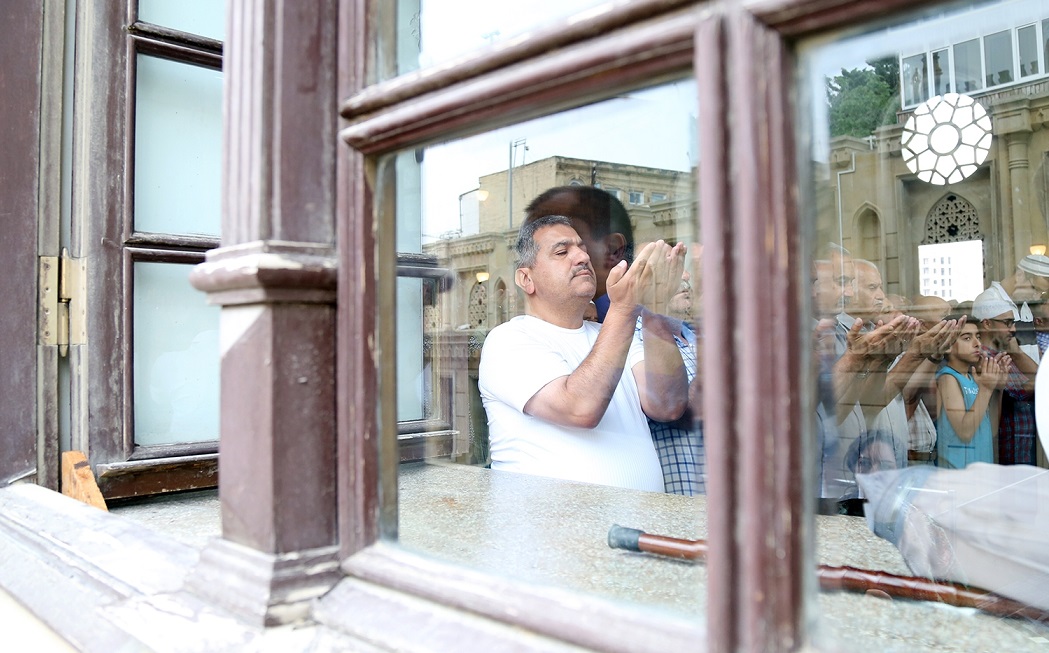 A man delivers his prayers to Allah during the Eid al-Fitr prayers, Baku, Azerbaijan, 2017 / Report.Az

“Eid Mubarak” or “Happy Eid” is the main message that millions of Muslims living in the Caspian region countries – Azerbaijan, Iran, Kazakhstan, Russia and Turkmenistan – are conveying to one another as they end a month-long, daily fasting and celebrate Eid al-Fitr, or the Feast of Breaking the Fast.

Ramadan – also known as Ramazan, Ramadhan, or Ramathan – is the ninth and most significant month in the Islamic calendar, and a time when Muslims are supposed to fast each day from sunrise until sunset. The name of the month is derived from the Arabic ramida or ar-ramad, which means “scorching heat” or “dryness.” Throughout the month all Muslims are called to fast, with exceptions made for the sick, elderly and pregnant, which includes abstaining from eating and drinking from dawn to dusk for days. Daily fasting starts with a pre-dawn meal known as sahur and wraps up in a sunset meal called iftar.

Fasting during Ramadan is one of the five pillars of Islam, along with the Muslim profession of faith, daily prayer, alms-giving, and the divine Hajj pilgrimage to the city of Mecca. Muslims are also encouraged to read Islam’s holy book of Quran (Koran) during Ramadan, meant to commemorate the first revelation of Islam’s holy book of Quran to prophet Muhammad (peace be upon him) around 1,400 years ago, according to Islamic belief.

Eid al-Fitr is celebrated this calendar year between June 14 and June 16. Dates differ mainly due to the start date of Ramadan according to the lunar calendar, and the new moon sighting on the 29th night of the holy month. This year Ramadan kicked off on May 16 and 17 in different countries of the Caspian region.

Fasting in Azerbaijan this year began on May 17, following a testimony or fatva from the Caucasian Muslims Office – the main religious institute that coordinates Islamic activities in the country. Although Azerbaijan is constitutionally secular, it is home to nearly 10 million people, 97 percent who are Muslim.

People flock to mosques across the country to pray God for blessing their families, relatives and friends, to help them live the rest of year in good health and prosper.

Ilham Mammadli, a resident of Baku, is thankful for a month where he says he felt healthier and vigorous and thankful to Allah for keeping him from indulging in bad habits.

“Ramadan is divine for Muslims, and that’s why it is called the Sultan of Eleven Months,” Ilham told Caspian News.

“Ramadan bears various individual and social benefits. With fasting, it helps tame the passion, be more patient, feel what hunger is and feed the needy people,” Mammadli continued. “Eid al-Fitr encourages people to send each other best wishes, help each other, as well as visit relatives, friends, and neighbors to share their joy.”

Iran is the only Caspian country that adopts Islam as the official religion for 80 million people living within its boundaries. Persians and ethnically diverse people in the country, which includes Azerbaijanis, Arabs and Kurds, for example, celebrate Eid al-Fitr with their own particular twists.

The last Friday of Ramadan in the northwestern province of East Azerbaijan in Iran is celebrated with women and girls from each family gathering together and sewing bags. Inside they place money and keep it safely tucked away until the next Ramadan. Called barakat kisasi – a phrase that means “bag of blessing” – the bag with money saved is what they say helps keep them from becoming poor.

“Friday is the Eid al-Fitr holiday in our city. We’re as moderate during Eid as we have been throughout the entire Ramadan. Our holiday table is filled with dates and fruits, while candies and meals are not allowed,” Bahram, a resident of East Azerbaijan province’s capital city of Tabriz told Caspian News.

“We go to each other’s houses during the Eid holiday, visit elderly people to wish their fasting be received by the almighty Allah, as well as convey the holiday messages to our relatives, friends, neighbors and all whom we know.”

Muslims in Kazakhstan and Turkmenistan, which account for 70 percent and 89 percent of their overall populations, respectively, see Ramadan as a cultural marker and a testimony to their spiritual heritage and respect for others. Eid al-Fitr is seen as the manifestation of a holy power that helps to strengthen unity amongst people.

Russia, while predominantly Christian, also sees celebrations of Eid throughout the country, as it has 25 million Muslims – or about one fifth of the population – living within it.