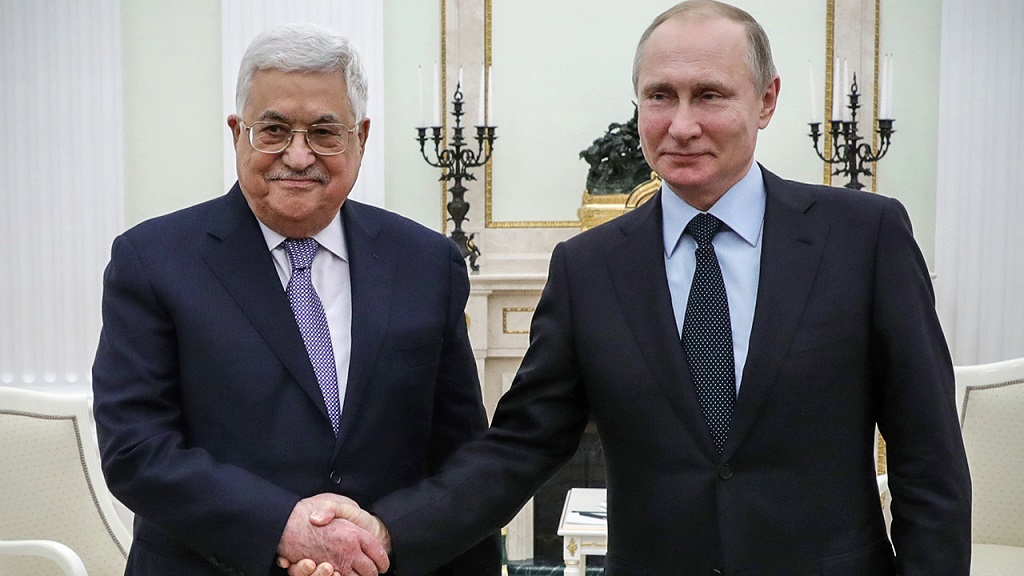 Russian President Vladimir Putin (on the right) shakes hands with Palestinian leader Mahmud Abbas (on the left) during their meeting at the Kremlin in Moscow on February 12, 2018. / The Guardian

Russian President Vladimir Putin opposes an idea to sideline the U.S. from the Middle East peace process, which had been suggested by Palestinian President Mahmoud Abbas earlier this week in Moscow, amid tensions that arose when President Donald Trump announced the U.S. would recognize Jerusalem as the capital of Israel.

The visit is seen as a push by the Palestinian leader to lessen the U.S.’ role and see if it could rely more heavily on Moscow in international peace talks.

"We state that from now on we refuse to cooperate in any form with the U.S. in its status of a mediator, as we stand against its actions," Abbas told Putin at the start of Monday's talks in Moscow.

According to reports, Putin made it clear that he opposes any decision regarding the settlement of the Arab-Israeli conflict without Washington’s input.

Ahead of Putin’s meeting with Abbas, Trump spoke by phone with Putin to push for a new peace plan in order to solve the conflict.

“Naturally we spoke about the Palestinian-Israeli settlement. I would like to convey to you his best wishes,” Putin told Abbas.

Abbas has refused to have any contact with the Trump administration after it made the announcement in December of what was widely viewed as a policy shift. Trump stressed that he was not specifying the boundaries of Israeli sovereignty in the city, and called for no change in the status quo at the city’s holy sites, but his decision was still regarded as a “slap of the century” to Palestine by the United States.

Russia is seen as having increasing leverage in the Middle East, given its military and diplomatic activities in Syria. Besides providing reinforcements to the embattled forces of Syrian President Bashar Al Assad, Russia has been a part of a peacebuilding initiative that also includes Turkey and Iran.

“Although Russia is one of the key actors that are actively influencing the situation in the region, I do not have the conviction that a formation of an alliance between the Palestinian autonomy and the Russian Federation will lead to positive shifts,” Denis Denisov, the Head of the Ukraine branch of the Institute of Commonwealth of Independent States, who is based in Moscow, told Caspian News.

Denisov said that excluding the U.S. from peace talks is likely a non-starter for Israel, which sees the U.S. as its most reliable global ally.

“It is necessary to consider the issue from global geopolitical relations, since the problem of the settlement of the Israeli-Palestinian conflict has been lasting for several decades already and no one can demonstrate any progress and clear prospects in it so far,” said Denisov.

Denisov said that an end to the situation playing out in Syria is higher on the U.S.’s list of priorities in the Middle East.