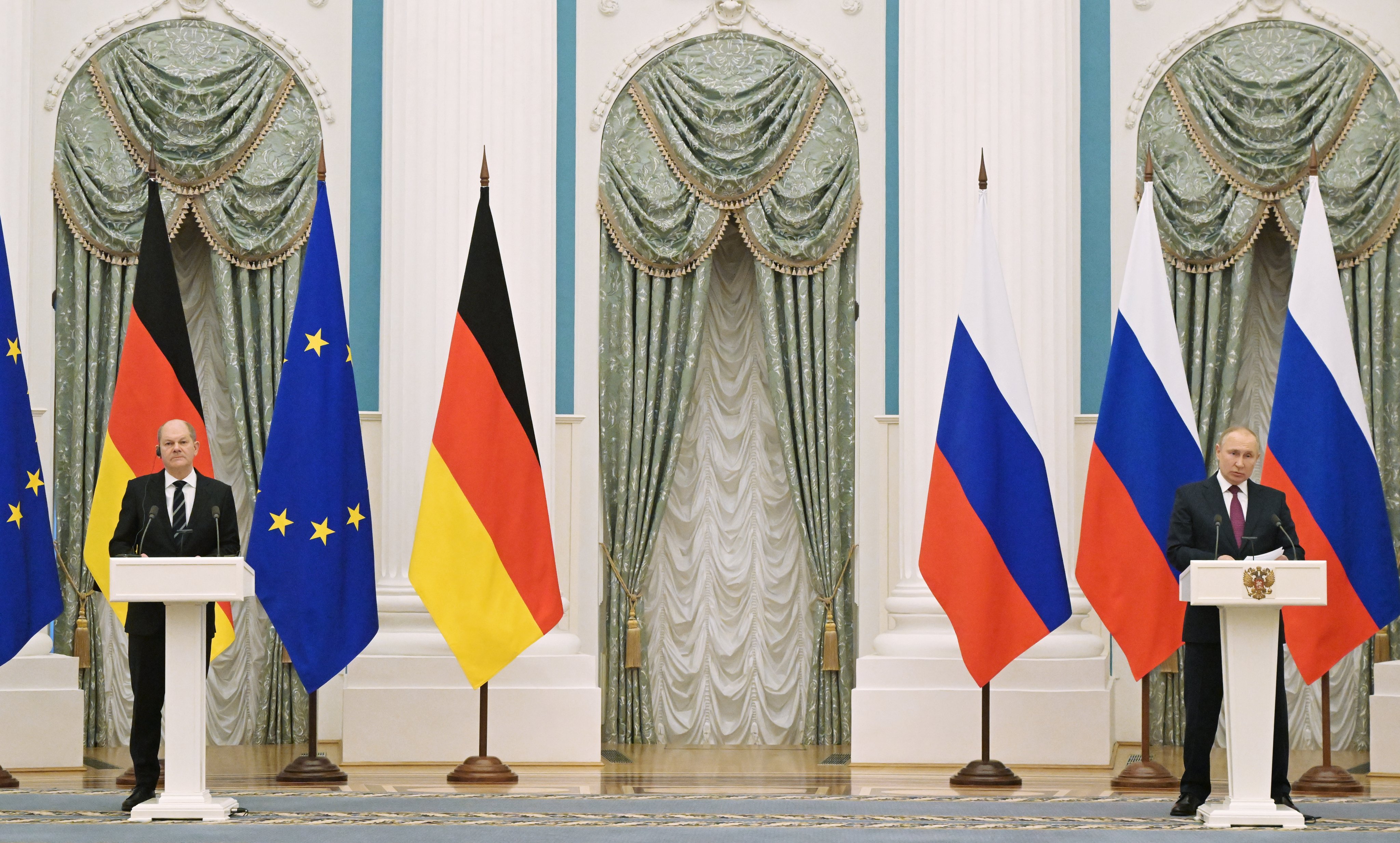 During a joint press conference with the German Chancellor in Moscow, Putin reiterated that Russia is open to further discussions. / kremlin.ru

Following his face-to-face talks with German Chancellor Olaf Scholz, Russian President Vladimir Putin has signaled he wants a peaceful path out of the Ukrainian crisis triggered by a massive deployment of Russian troops along the borders of its ex-Soviet neighbor.

During a joint press conference with the German Chancellor in Moscow on Tuesday, Putin reiterated that Russia is open to further discussions despite the fact that the United States and NATO had not satisfied Russia's security demands.

“We are ready to continue this joint work further. We are also ready to follow the negotiation track but all issues must be considered as a whole, without being separated from the main Russian proposals, the implementation of which is an unconditional priority for us,” Putin said at the press conference, according to the Kremlin.ru.

He went on further to say that Moscow is ready for talks with the US and NATO on limits for missile deployments and military transparency. Putin insisted he does not want a war around Ukraine after weeks of tensions fueled by more than 100,000 Russian troops close to Ukraine’s borders.

“Do we want (a war) or not? Of course not. That’s why we put forward our proposals for a negotiation process,” he said.

In turn, Scholz — who has been in office for just over two months — agreed with Putin’s assessment that there is still a chance to avert war over Ukraine and said that “diplomatic options are far from exhausted".

Ahead of his first official trip as chancellor to Russia, Scholz met with Ukrainian President Volodymyr Zelensky in Kyiv. With the visit, Berlin aimed to reiterate its solidarity with Ukraine after Germany refused to deliver defensive weapons to Ukraine — a move that caused severe frustration among Ukrainian politicians. The visits to Kyiv and Moscow were also supposed to represent an attempt by the Social Democrat chancellor to assert himself on the international stage amid alarms coming from allies abroad and critics at home over Scholz's silence and muddled messaging in the first weeks of this crisis.

Scholz’s visit to Moscow came shortly after Russia indicated that some of its troops stationed close to the Ukrainian border were returning back to permanent bases inside the country as they had finished military exercises. The announcement of troops being pulled back is a “good sign,” the German Chancellor said, expressing his hope that more such steps will follow.

Meanwhile, some Western officials have already doubted Russia’s claim that it was moving troops away from Ukraine’s border. According to NATO Secretary General Jens Stoltenberg, it “remains to be seen whether there is a Russian withdrawal.”

“So far, we have not seen any de-escalation on the ground. On the contrary it appears that Russia continues their military buildup,” he said.

According to an unnamed senior official at Biden administration, Russia has not withdrawn its troops.

“We now know it was false,” the official said, adding that as many as 7,000 troops have joined the 150,000 already near the border in recent days.

Amid the reports claiming that the invasion may occur at any time, the US, the UK, Germany, and Australia last week ordered the evacuation of most of its embassy staff out of Ukraine. At the same time, New Zealand, Canada, Finland, Estonia, Japan, and the Netherlands urged their citizens to leave the country.

Russia has always denied plans to invade Ukraine, claiming that it was free to move its forces within its borders. The Kremlin says Washington is deliberately stoking hysteria about Russia's invasion of Ukraine to pump Kyiv with weapons. Over the past few days, the Kremlin has indicated that there is still hope for diplomacy. At a meeting with Putin on Monday, Foreign Minister Sergey Lavrov said that “there is always a chance” to reach an agreement with the West.

Kyiv has long been trying to join NATO to get protection against what it describes as Russian aggression. The Kremlin, however, has repeatedly claimed that Ukrainian membership in the military alliance would be dangerous for Russia.