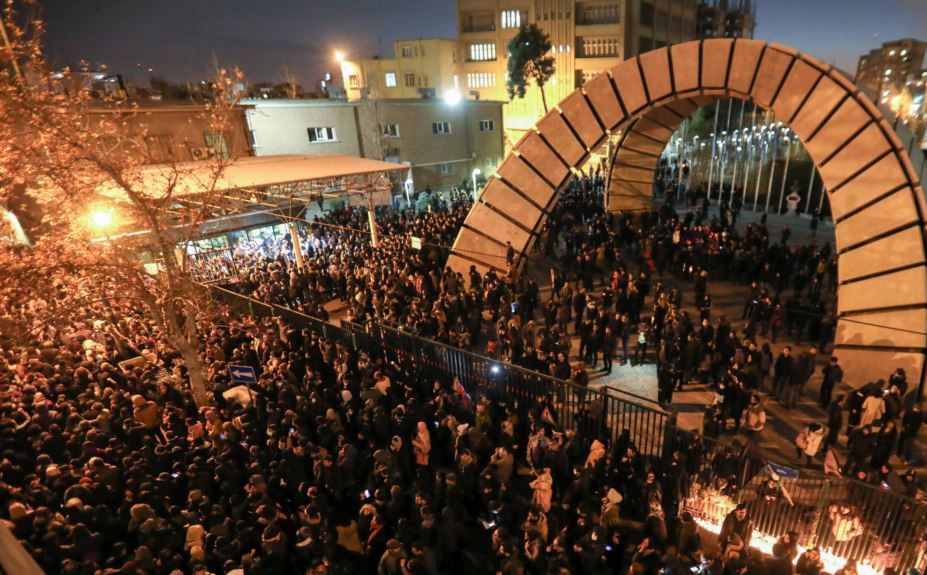 Iranians students demonstrate following a tribute for the victims of Ukraine International Airlines Boeing 737 in front of the Amir Kabir University in the capital Tehran, on January 11, 2020. / AFP

Demonstrations have erupted in Iran following the government’s admission that it had mistakenly shot down a Ukrainian passenger plane after three days of denial.

According to Radio Farda, the Persian language branch of Radio Liberty, crowds of people flocked to the Azadi Square in Tehran and several other cities including Mashhad, Isfahan, Shiraz, Gorgan, Rasht, Ahwaz, Qazvin, Semnan, Tabriz and Kermanshah to hold vigils while chanting slogans against the government and the IRGC, protesting the downing of the Ukrainian airliner that left dead 176 passengers and crew, including many Iranian students and academics. Police reportedly fired tear gas at protesters in many places including a few underground stations in Tehran.

Meanwhile, Chief of Tehran Police Brigadier General Hossein Rahimi told Fars news that “police absolutely did not shoot because the capital’s police officers have been given orders to show restraint”.

A member of the Iranian parliament, Mohammad Reza tweeted that “as a representative of the people in parliament I want the resignation, removal and punishment of those responsible, who dissembled, and were untruthful with people.” Another MP, Mahmoud Sadeghi, also wrote in his Twitter account that “during the November [protests] you hid the number of deaths and wounded, if you could have, you would also have hidden the reason for the plane crash.”

In a press conference on January 11, Commander of the IRGC's Aerospace Force Amir Ali Hajizadeh said about the IRGC's responsibility for the downing of the passenger plane, which took place after Iran had conducted retaliatory strikes against U.S. military bases in Iraq following the killing of the IRGC Quds Force commander, Qasem Soleimani in the January 3 airstrike in Baghdad. Hajizadeh claimed Iran’s air defense systems were on high alert due to rising tensions with the United States and President Donald Trump’s threat to strike 52 Iranian cultural sites, and there were rumors that Washington had launched cruise missiles into Iran.

On January 12, Donald Trump warned Iran against killing protesters who have come out to show their anger over the downing of the Ukrainian plane, in a tweet.

“To the leaders of Iran - DO NOT KILL YOUR PROTESTERS. Thousands have already been killed or imprisoned by you, and the World is watching. More importantly, the USA is watching. Turn your internet back on and let reporters roam free! Stop the killing of your great Iranian people!”