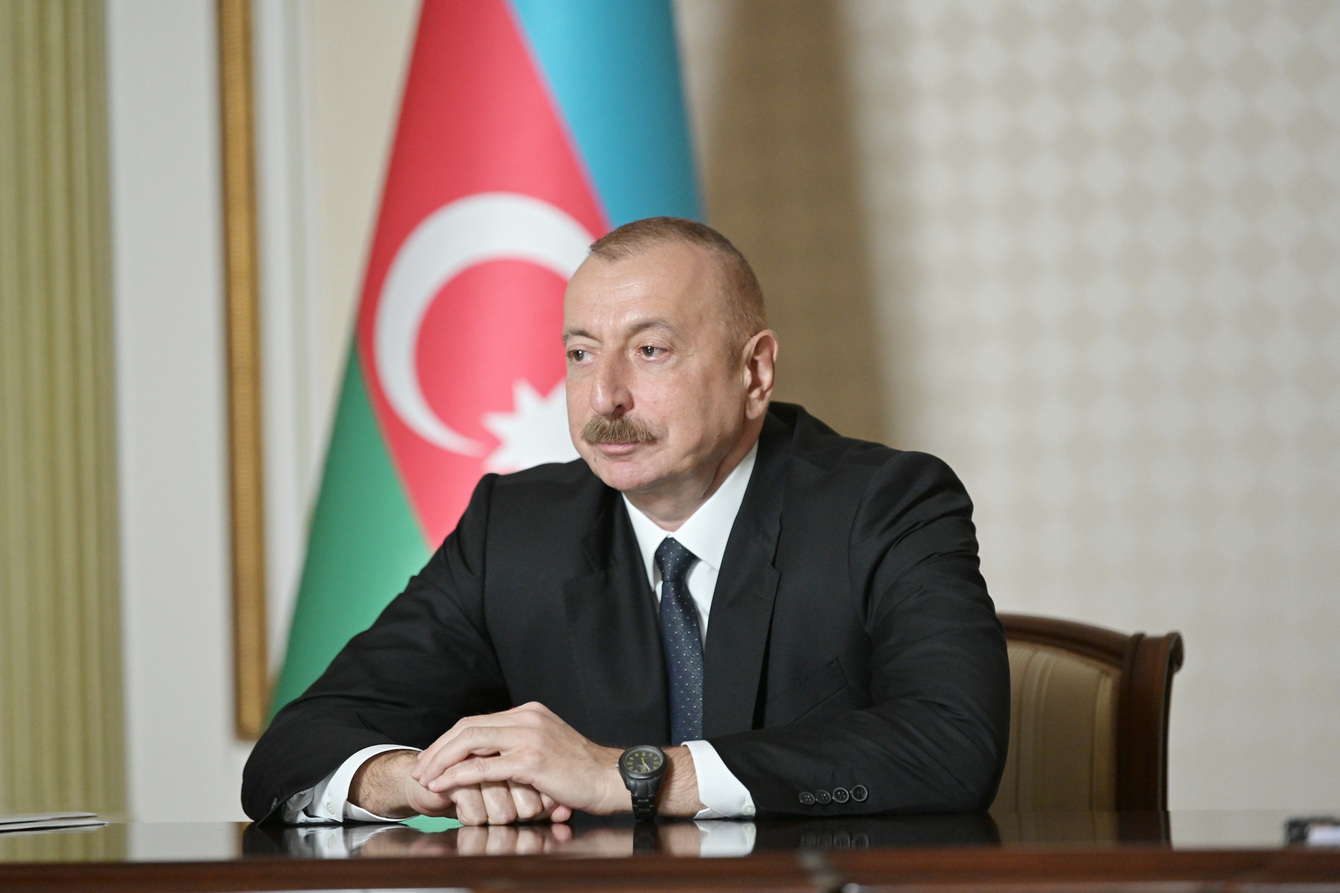 President of the Republic of Azerbaijan, Ilham Aliyev joined the virtual meeting with his Afghan and Turkmen counterparts from his working cabinet in Baku, Azerbaijan, July 2, 2020 / President.Az

Development and future perspectives of the Lapis Lazuli international transit route were among the priority issues discussed in a video conference joined by the three heads of state earlier this week.

During the virtual meeting, President Ilham Aliyev of Azerbaijan said that the Baku-Tbilisi-Kars railway positioning Azerbaijan as a hub between Asia and Europe has made significant contributions to the transport and logistics sector in Eurasia.

"After connecting the Lapis-Lazuli route with the Baku-Tbilisi-Kars railway in 2018, goods from Afghanistan began to be transported from Turkmenistan to Azerbaijan and further to the west," President Aliyev said, according to President.Az. "The first experimental cargo shipped from Afghanistan in December 2018 was delivered to the Baku port within 12 days. In January-May of this year, 55,500 tons of cargo were transported through Azerbaijan in the direction of Afghanistan and back."

President Aliyev went on to add that alongside the railroad services, 12,000 tons of cargo belonging to Azerbaijan and other countries have been delivered from Azerbaijan to Afghanistan by cargo planes during the same period, making Azerbaijan one of the most important new transport and logistics centers in Eurasia.

Launched in 2012, the $2 billion multi-modal Lapis-Lazuli (LL) project became operational in 2018, transporting back-and-forth deliveries of cargo between the markets in Central Asia, South Caucasus, Black Sea and southeastern Europe. The main transit countries along the route are Turkmenistan, Azerbaijan, Georgia, and Turkey.

The broader purpose of the LL is to leverage economic correlation within the Eurasian region and synchronize it with massive transport corridors within the same region such as the International North-South Transport Corridor that extends from India to Finland.

The corridor encompasses a huge landmass that extends via railroads from the cities of Aqina in northern and Torghundi in western Afghanistan through Turkmenistan’s Caspian littoral Turkmenbashi port city, where it cuts via seaways to capital Baku of Azerbaijan. Then it connects onward to Tbilisi, capital of Georgia, as well as the Georgian Black Sea ports of Poti and Batumi before reaching the cities of Kars and Istanbul of Turkey at the gate to Europe. In Turkey, it connects to the Middle Corridor Project or the East-West Trans-Caspian Trade and Transport Corridor that links Turkish markets to that of in China.

The route is designed to move cargo from Afghanistan to the greater European marketplace and backward in the cheapest, shortest and safest way. Eighty percent of goods to Europe will move by railway, as well as across the Caspian and Black seas by maritime routes.

Afghanistan's President Mohammad Ashraf Ghani said his government would like traders to focus on imports from Baku and Turkmenbashi and to this end, Kabul supports the initiative of Afghan traders or joint ventures with the Afghan government to invest in or lease facilities.

"The second is the railway. The railroad proved its worth during the coronavirus era. Because despite the importance of truck transportation, the railway has been our savior," President Ghani said at the virtual meeting with his Azerbaijani and Turkmen counterparts. "We want to be able to predict tariffs and traffic will allow us to expand trade by rail. We want an agreement between the leadership of Azerbaijan and Turkmenistan on customs."

Turkmenistan's President Gurbanguly Berdimuhamedow said in his turn that Ashgabat is ready to consider specific forms of partnership with Afghanistan and Azerbaijan, including the issue of leasing warehouse premises, terminals for storing petroleum products in the Turkmenbashi International Seaport for long-term lease, allocating special places for handling cargo sent to or from both countries, the Turkmen government portal reported.

Turkmenbashi International Sea Port is a key link in Turkmenistan within the Lapis Lazuli transport corridor with its oil loading, ferry, passenger, and cargo terminals. The length of the port berth, designed to serve 17 vessels simultaneously, is over 1,8 kilometers. Each year, the sea harbor can receive and dispatch 400,000 containers and 75,000 freight vehicles. The total capacity of the Turkmenbashi International Seaport reaches 25-27 million tons of cargo per year.

The LL corridor is seen as a linchpin to revive Afghanistan's role in global trade similar to contributions it has made through making a part of the ancient Silk Road, meant to throw weight behind the efforts along with China's Belt and Road initiatives, which is expected to revitalize the ancient Silk Road route.

The name Lapis Lazuli comes from the historic route, an integral part of the ancient transcontinental Silk Road that was used for transporting lapis lazuli and other semi-precious stones from Afghanistan to the Caucasus, Russia, the Balkans, Europe and North Africa for over 2,000 years. Lapis lazuli refers to a deep blue metamorphic rock used as a semi-precious stone that has been prized since antiquity for its intense color.