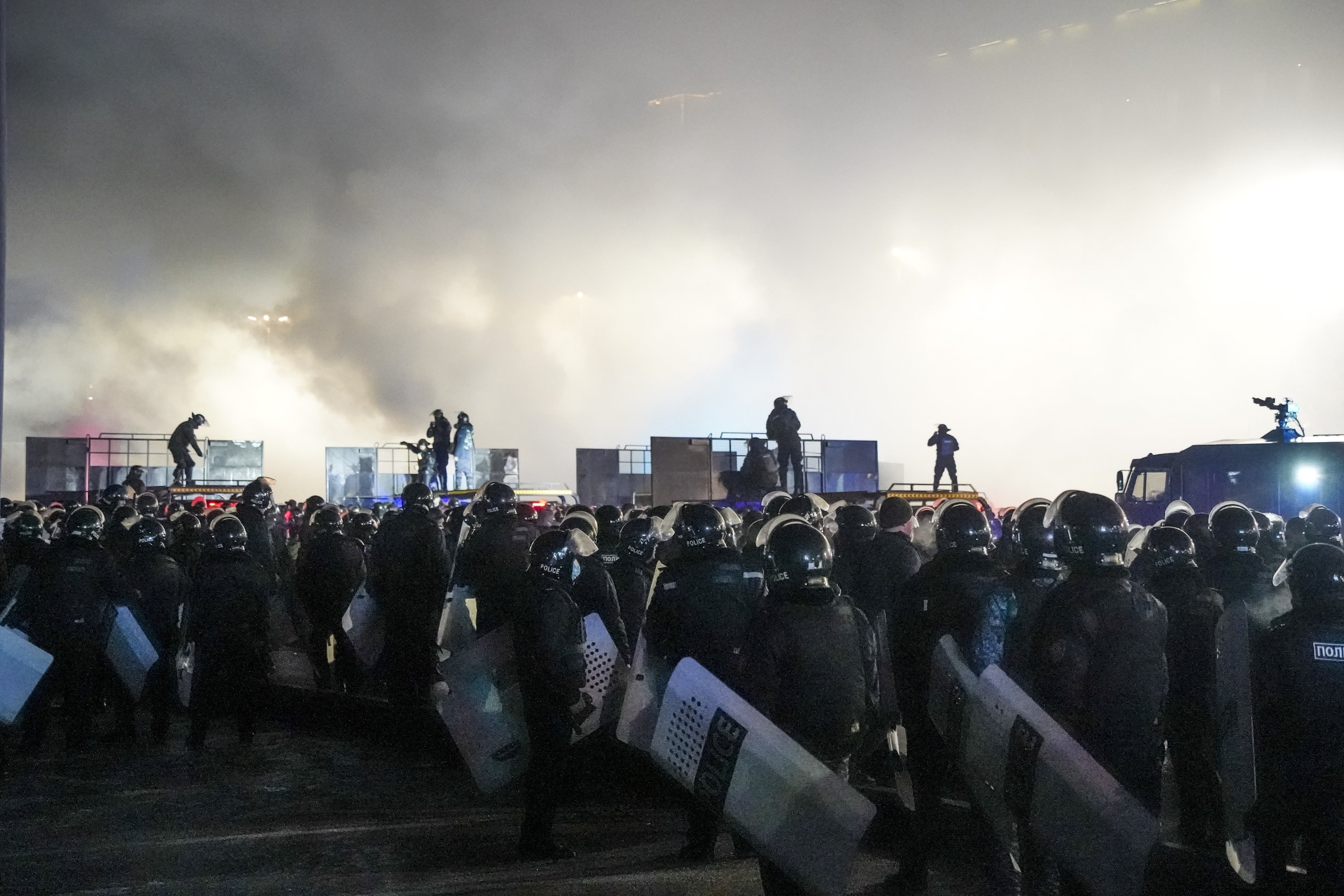 Although the initial cause of the unrest in the country was the recent doubling of LPG prices, the protests have intensified into widespread discontent with the government. / AP Photo

As protests have engulfed the country, Kazakhstan’s President Kassym-Jomart Tokayev has stripped his powerful predecessor Nursultan Nazarbayev of a role as head of the country’s Security Council, a body that has been headed by Nazarbayev since his 2019 resignation from the presidency.

In his address to the nation on Wednesday, Tokayev voiced his readiness for tough action in response to mass protests prompted by a sharp rise in liquefied petroleum gas (LPG) prices.

"As the head of state, and from today on, Chairman of the Security Council, I intend to act as tough as possible," Tokayev said in a televised address on Wednesday. "This is an issue of the security of our citizens, who make numerous requests to me to protect their lives and the lives of their families. This is a question of the security of our state. I am sure the people will support me."

Tokayev’s address came three days after thousands of protesters took to the streets of Kazakhstan and clashed with security forces over the soaring energy prices, the biggest crisis to shake the oil-rich Central Asian country since it gained independence in 1991. Demonstrators demanded the price of liquefied petroleum gas — a low-carbon fuel that many Kazakhs use to power their cars — to be halved from 120 tenge ($0.27) per liter to the level at which the fuel was sold last year.

In a bid to defuse tensions, Tokayev wrote on Twitter on Tuesday that the government had taken a decision to lower LPG prices in the western Mangystau region "in order to ensure stability in the country."

"Soon I will present new proposals for the political transformation of Kazakhstan. I maintain the same position of consistent reforms," Tokayev said in his Wednesday's address.

Although the initial cause of the unrest in the country was the recent doubling of LPG prices, the protests have intensified into widespread discontent with the government.

Protesters have been chanting slogans saying "Shal, ket!" ("Old man, go away!") as they storm the streets, referring to the country's longtime strongman, Nursultan Nazarbayev, who led the country from its independence until 2019.

Since 1991, Nazarbayev was re-elected as president four times: in 1999, 2005, 2011 and again in 2015. In 1995, Kazakhstanis took part in a referendum to ratify his proposal to skip the scheduled 1996 presidential election and allow him to remain in office until 2000. Seven years later, parliament passed legislation to remove term limits.

Since his sudden resignation in March 2019 Nazarbayev, who now is 81, has retained control over the country as chairman of the security council and "Leader of the Nation" — a title that afforded him unique policymaking privileges as well as immunity from prosecution.

The recent demonstrations initially erupted in Zhanaozen in Kazakhstan’s oil-rich western region of Mangystau have quickly extended to other oil towns — Aktau, Aktobe, and Atyrau — and then in Kazakhstan’s capital city of Nur-Sultan and Almaty, the largest city, turning into the most geographically widespread protest in the country's history.

Tokayev declared a state of emergency in the city of Almaty and Mangystau region and then in the whole country following protests in major cities, which, according to him, were provoked by "financially motivated conspirators." On January 5, Tokayev also accepted the resignation of the government, however, this could not stop protests.

The unprecedented unrest in the Central Asian country spun out of control with their epicenter in Almaty. Several thousand protesters stormed the headquarters of the Almaty city administration on Wednesday afternoon and appeared to have seized control of the building. Police used tear gas and stun grenades at the crowd but failed to contain the wave of protests.

According to the interior affairs ministry, 18 members of security forces have been killed and 748 injured during unrest in several regions of Kazakhstan.