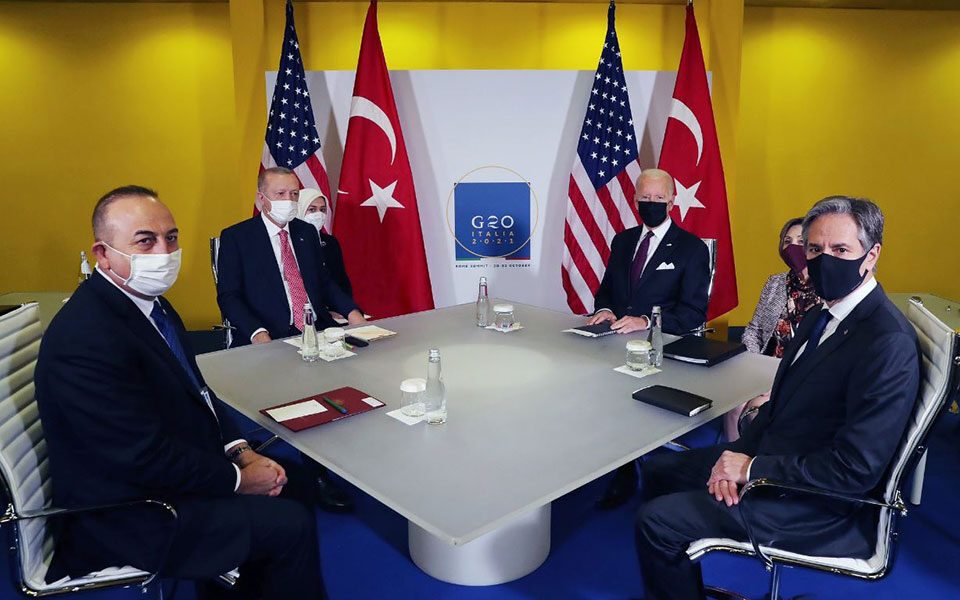 US President Joe Biden talks with his Turkish counterpart Recep Tayyip Erdogan as they attend the G20 leaders' summit in Rome, Italy, on October 31, 2021.

The statement was made during the talks between the US president with his Turkish counterpart Recep Tayyip Erdogan on the margins of the G20 Summit in Rome.

“President Biden reaffirmed our defense partnership and Turkey’s importance as a NATO Ally, but noted US concerns over Turkey’s possession of the Russian S-400 missile system,” reads a statement issued by the White House administration on Sunday.

The meeting was reportedly held in a “positive atmosphere” where the leaders expressed the “joint will to further strengthen and improve Turkey-U.S. relations and agreed to establish a common mechanism accordingly.”

The United States’ decades-long strategic ties with Turkey – NATO’s powerful key ally and a southern powerhouse — have been trending steadily downward for several years. Turkey’s military engagement in Syria, Iraq, and Libya and the dispute between Ankara and Athens over claims to energy reserves in Eastern Mediterranean waters complicated relations between the two countries.

Turkey’s expulsion from the US-sponsored F-35 Joint Strike Fighter program had only worsened relationship between the countries. Ankara was excluded from the program after purchasing the Russian-made missile systems, which Washington says threaten the jets.

Officials in the US are concerned that the S-400 can be used to gather data on the capabilities of the American-made F-35 fighter jet – a fifth-generation combat aircraft designed to perform ground attack and air superiority missions. Turkey, in turn, believes the S-400s could be used independently without being integrated into NATO systems and therefore pose no risk.

Turkey has long sought to address shortcomings concerning its air defenses. Ankara’s security concerns were exacerbated following US withdrawal of the few remaining Patriot missile platforms stationed along the Turkish-Syrian border in 2015, and later from Turkey’s Incirlik air base. Turkey, which previously attempted to procure the US Patriot missile system to meet its domestic defence needs, was denied multiple times before opting for the S-400 in 2017.

Meanwhile, Moscow’s defense cooperation with Ankara has expanded in recent years despite heightened pressure from the United States. Turkey was the first NATO member state to purchase the S-400 missile system from Russia.

The S-400 Triumph air defense system (ADS) was designed to destroy aircraft, cruise and ballistic missiles, and ground targets objectives. Triumf engages aerodynamic and ballistic targets at distances of up to 400 km and up to 60 km, respectively. It simultaneously guides up to 160 surface-to-air missiles (SAMs) and engages up to 80 aerial targets.

Russia is ranked the Caspian region’s largest arms exporter and the second-largest globally behind the United States. The S-400 is proving to be lucrative for Russia’s defense manufacturing sector and popular with its global clients. India and China have also expressed their interest in Russian-made systems.