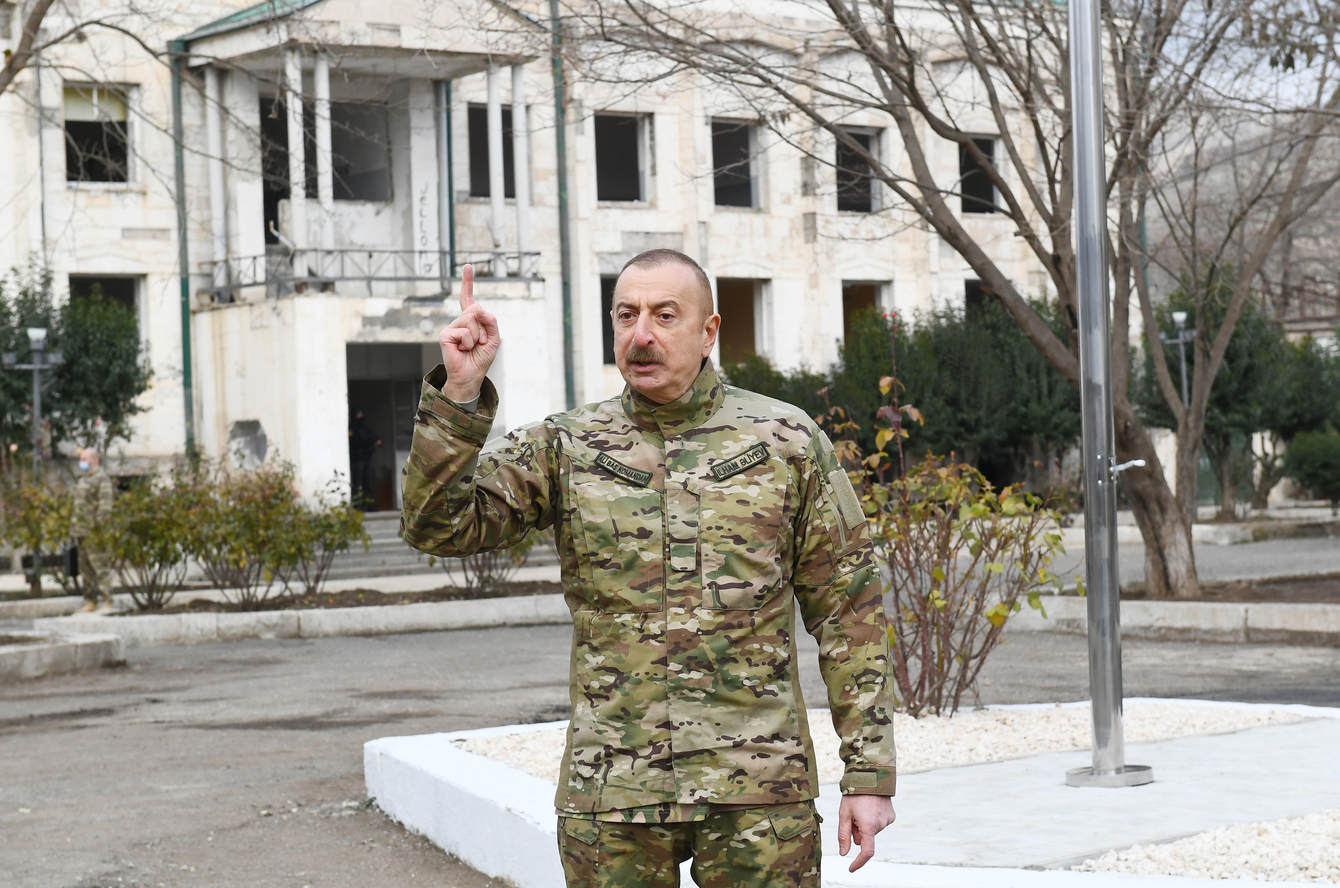 President Ilham Aliyev delivers a speech after hoisting the Azerbaijani flag in Gubadli, an Azerbaijani district that was liberated from Armenia's occupation after 27 years / President.Az

During a visit to the recently liberated Gubadli and Zangilan districts of Azerbaijan on Wednesday, the country's President Ilham Aliyev sent a powerful message to Yerevan about the dangerous outcomes of any possible military action by Armenia in the future.

President Aliyev said the atrocities committed in the Azerbaijani territories by the Armenians testifies to the great service of Azerbaijan not only to itself but also to the entire region.

"We have caved in the head of Armenian fascism. It is the Armenian fascism that has brought our lands to this plight. We have broken the back of the fascist Armenian state, the terrorist state," he said, President.Az reports. "Even the Nazis did not commit such atrocities during World War II. See what savage enemy we were facing, what evil forces we have defeated?! We have liberated our region and the Caucasus from fascists."

Gubadli and Zangilan were among seven areas along with the Nagorno-Karabakh (Daghlig Garabagh) region of Azerbaijan occupied illegally by Armenia during the first war in the Karabakh region. The entire infrastructure of Gubadli and Zangilan located on the southwestern edge of the Karabakh region has been almost razed to the ground during 27 years of their occupation by Armenia. The Khanlig village of Gubadli has been later turned into an illegal settlement for Armenians brought from abroad in gross violation of Geneva Conventions. The mosque in Zangilan was looted and ruined by Armenians, and seen desecrated as a barn for pigs in a video that has gone viral after the district's liberation.

The liberation of Zangilan and Gubadli came as a result of the Azerbaijani army's successful counter-offensive operations throughout six weeks from September 27 to November 9. The latest outbreak of war started with attacks by Armenia's forces deployed in the occupied Karabakh region on Azerbaijani military positions and civilian settlements, triggering immediate counter-measure of the Azerbaijani forces. Azerbaijani army liberated over 300 settlements, including five cities from Armenia's occupation. The liberation of Shusha, the key city in the Nagorno-Karabakh region of Azerbaijan, has played a crucial role in the retreat of Armenia's forces and cessation of hostilities.

A tripartite ceasefire statement signed by Azerbaijan, Armenia, and Russia on November 9 cemented Azerbaijan's territorial regains. As part of the agreement, Armenia returned the occupied Aghdam, Kalbajar and Lachin districts to Azerbaijan by December 1.

President Aliyev said the ceasefire statement was in fact the capitulation of Armenia and humiliating for Yerevan. The president called on the Armenian society to properly analyze the outcomes of the war and to abstain from further provocations against Azerbaijan.

"We brought it [Armenia] to its knees, so they must draw the right conclusions. Armenian society must draw the correct conclusions. If they still cherish any revenge sentiments, the end will be bitter. If a single bullet is fired here from the other side – the Armenian border is 5 kilometers from here – we will crush them so hard they will forget their own names," President Aliyev said.

In early December, Armenia's government confirmed 2,718 losses in manpower. However, the Armenian media blamed the government for hiding real numbers, which they believe is 4,750.