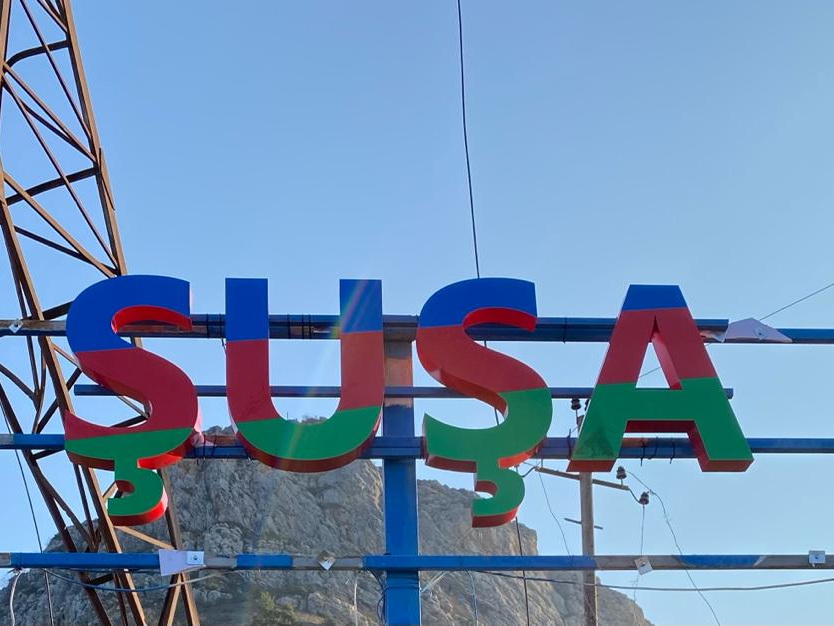 The historic name of the Shusha city in Azerbaijan's Nagorno-Karabakh region was reinstalled following the city's liberation from Armenia's occupation on November 8, 2020 / Courtesy

Azerbaijan's President Ilham Aliyev reacted strongly to the recent visit of a top Armenian official to the Nagorno-Karabakh (Daghlig Garabagh) region, warning the government of Armenia to stop such visits to Azerbaijani lands.

President Aliyev commented on Armenian foreign minister Ara Ayvazyan's trip to the city of Khankendi in the Nagorno-Karabakh region, an internationally recognized territory of Azerbaijan. The president said such a visit contradicts the steps taken toward the normalization of relations.

"After all, if relations normalize, then what is the need for such provocative “visits”? What are they trying to show? Are they trying to irritate us again? Let them not forget that such steps cost them dearly," President Aliyev said, recalling the recent six-week-long counter-attack operations of the Azerbaijani army in the Karabakh region.

He went on to add that no foreign citizen or international organization, except the Red Cross, can enter the Nagorno-Karabakh region without Baku's permission since the region is recognized internationally as an integral part of Azerbaijan. The president vowed a "very harsh" response should any similar actions be repeated.

"We first warned them through the Ministry of Foreign Affairs. Further warnings will be given differently. Their visits there must stop. Let them sit in their own country," President Aliyev said.

Armenia's Foreign Minister Ara Ayvazyan paid an illegal visit to the Khankendi city of Azerbaijan on January 6, where he met with the self-proclaimed “foreign minister” of the illegal separatist regime, David Babayan, and held so-called foreign policy consultations with him.

Despite a crushing defeat against the Azerbaijani forces on the battlefield and losing decades-long illegal control of the territories in the Karabakh region, the Armenian government continues putting its weight behind the self-proclaimed separatist regime in Azerbaijan's Nagorno-Karabakh region. During the recent visit, Ayvazyan announced the so-called "main guidelines of Yerevan's foreign policy on Karabakh," calling for the self-determination of unrecognized "Artsakh" (the name used in Armenia for Azerbaijan's Nagorno-Karabakh region) and the most paradoxically, return of the "territories occupied by Azerbaijan." The statement by Armenia's minister came amidst the introduction of Azerbaijan's initiatives, appeals and statements aimed at maintaining sustainable peace and cooperation in the region.

The Azerbaijani Foreign Ministry has reacted promptly to the illegal visit of Armenia's minister to Khankendi and the delusional declarations he voiced there. The Azerbaijani ministry's spokesperson Leyla Abdullayeva said Ayvazyan's actions completely contradict the trilateral statement signed by Azerbaijan, Armenia and Russia on November 10 and "does not comply at all with the framework of peace, security and cooperation in the region after the cessation of hostilities."

The latest outbreak of war in the region started on September 27 after Armenia's forces deployed in the occupied Azerbaijani lands shelled military positions and civilian settlements of Azerbaijan. The attacks triggered the Azerbaijani forces to take immediate counter-offensive measures for pushing back the assault. Intensive relocation of personnel and military equipment to the battlefield by both sides fanned the flames of the largest clashes between Armenia and Azerbaijan since the 1994 ceasefire.

The tripartite ceasefire statement ended the 44-day-long war between Armenia and Azerbaijan in the Karabakh region on November 10. By then, Azerbaijani forces managed to liberate over 300 settlements, including the cities of Jabrayil, Fuzuli, Zangilan, Gubadli and Shusha. Armenia returned the occupied Aghdam, Kalbajar, and Lachin districts to Azerbaijan by December 1 as part of the obligations it took under the ceasefire deal. The peacekeeping mission in the Nagorno-Karabakh region is managed by Russia, which deployed 1,960 peacekeepers in the region shortly after the end of hostilities.

President Aliyev says the ceasefire statement should be the basis for future actions in Azerbaijan's Nagorno-Karabakh region, adding that each side must abide by its terms.