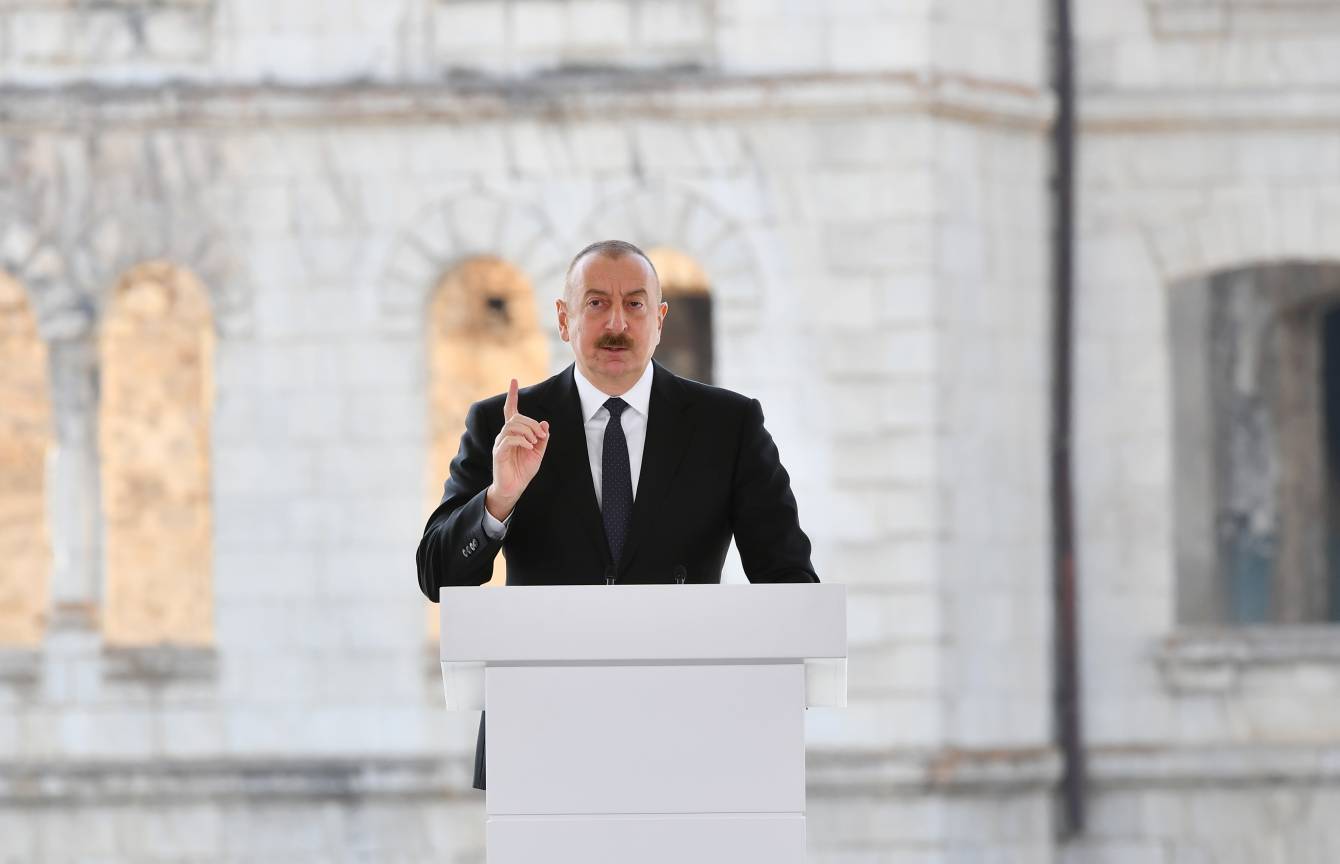 President Ilham Aliyev’s recent remarks in the city of Shusha have reaffirmed Azerbaijan’s final stance on the future of the Minsk Group of the Organization for Security and Cooperation in Europe (OSCE).

The head of Azerbaijan is convinced there is no sense in talking about the Group since it was virtually paralyzed in 2019 and never succeeded in any result in mediating the talks between Armenia and Azerbaijan.

“This group was established not to resolve the problem, but to perpetuate the fact of occupation,” President Aliyev said at the 5th Congress of World Azerbaijanis.

“Armenian lobby groups are quite influential in the Minsk Group co-chair countries. This is why this group did not achieve any results for 28 years,” he added.

The president further said ludicrous statements of the Armenian leadership threatening a new war remained unanswered by the Minsk Group, which was mandated to find a political end to the occupation of Azerbaijani lands.

“The OSCE understands perfectly well that the Minsk Group no longer exists. I was indeed asked a few months ago, before the Russia-Ukraine war, what the Minsk Group should be doing now. I said that 2022 would see the 30th anniversary of their establishment. They will celebrate the anniversary and then retire. But since the start of the Russia-Ukraine war, they haven’t had the opportunity to celebrate the anniversary,” President Aliyev said.

President’s remarks came amidst the efforts of the Armenian side to bring back the OSCE Minsk Group into negotiations. Armenian Foreign Minister Ararat Mirzoyan earlier said that Yerevan asked the Group to initiate peace talks with Azerbaijan based on the basic principles submitted by Baku.

Earlier, Sergey Lavrov, Foreign Minister of Russia, which is one of the three co-chair countries at the Minsk Group, said the US and France refused to cooperate with Moscow in this format.

“I don’t know what the future will be, because our so-called French and American partners in this group (...) cancelled the “troika” of the OSCE Minsk Group co-chairs,” Lavrov said on April 8.

In the meantime, Washington announced that Andrew Schofer, the OSCE Minsk Group co-chair from the US, was appointed the US State Department’s senior adviser on negotiations in the Caucasus. Paris also announced that Brice Roquefeuil, the co-chair from France, was charged as the Ambassador for the Eastern Partnership in the country’s foreign ministry.

Russian Foreign Ministry’s Spokesperson, Maria Zakharova, said this week that Moscow did not receive any signal from Washington and Paris about the resumption of the Minsk Group.

According to the Assistant to the President of Azerbaijan, Head of the Foreign Policy Affairs Department of the Presidential Administration, Hikmat Hajiyev, the OSCE Minsk Group was in the process of self-liquidation following the Second Karabakh War and subsequent developments.

In the early 1990s, the OSCE Minsk Group assumed the role of mediator in the conflict between Armenia and Azerbaijan over the latter’s Karabakh (Garabagh) region. In 1991, Armenia launched a full-blown military war against Azerbaijan, which ended in a ceasefire in 1994. The war led to the occupation of 20 percent of Azerbaijan’s internationally recognized lands by Armenia. Over 30,000 ethnic Azerbaijanis were killed and one million others were expelled from their lands in a brutal ethnic cleansing campaign conducted by Armenia.

At the height of the war in 1993, the United Nations adopted four resolutions demanding immediate and unconditional withdrawal of Armenia’s forces from the occupied lands. However, Armenia has not abided by the resolutions, dashing hopes for a political solution and simultaneously preparing for the next military phase of the conflict.

Diplomats from the US, France, and Russia have served as the Minsk Group’s co-chairs to spearhead international efforts to find a durable solution to what once was one of the most dangerous regional conflicts. Despite decades-long shuttle diplomacy conducted by the group co-chairs, negotiations remained dead in the water without any breakthrough.

On September 27, 2020, the Armenia-Azerbaijan conflict took a violent turn when Armenia’s forces deployed in occupied Azerbaijani lands shelled military positions and civilian settlements of Azerbaijan. During counter-attack operations that lasted 44 days, Azerbaijani forces liberated over 300 settlements, including the cities of Jabrayil, Fuzuli, Zangilan, Gubadli, and Shusha, from a nearly 30-year-long illegal Armenian occupation. The war ended with the signing of a statement on November 10, 2020, under which Armenia also returned the occupied Aghdam, Kalbajar, and Lachin districts to Azerbaijan.

Shortly after the war, President Aliyev said the Group failed to resolve the conflict despite its mandate to mediate a political solution.

Last year, Richard E. Hoagland, who acted as the US co-chair of the Minsk Group in 2017, raised the curtains to show what was actually happening behind the scene.

“We stayed in five-star hotels where we were usually assigned suites on the executive floor that gave us access to a private dining room and full bar at no additional expense. We always sought out the best restaurants in the cities where we found ourselves. We lived well while we showed the OSCE flag and reminded Baku and Yerevan that the Minsk Group exists. But to be blunt, very, very little ever got accomplished,” Hoagland said, according to Foreign Policy.