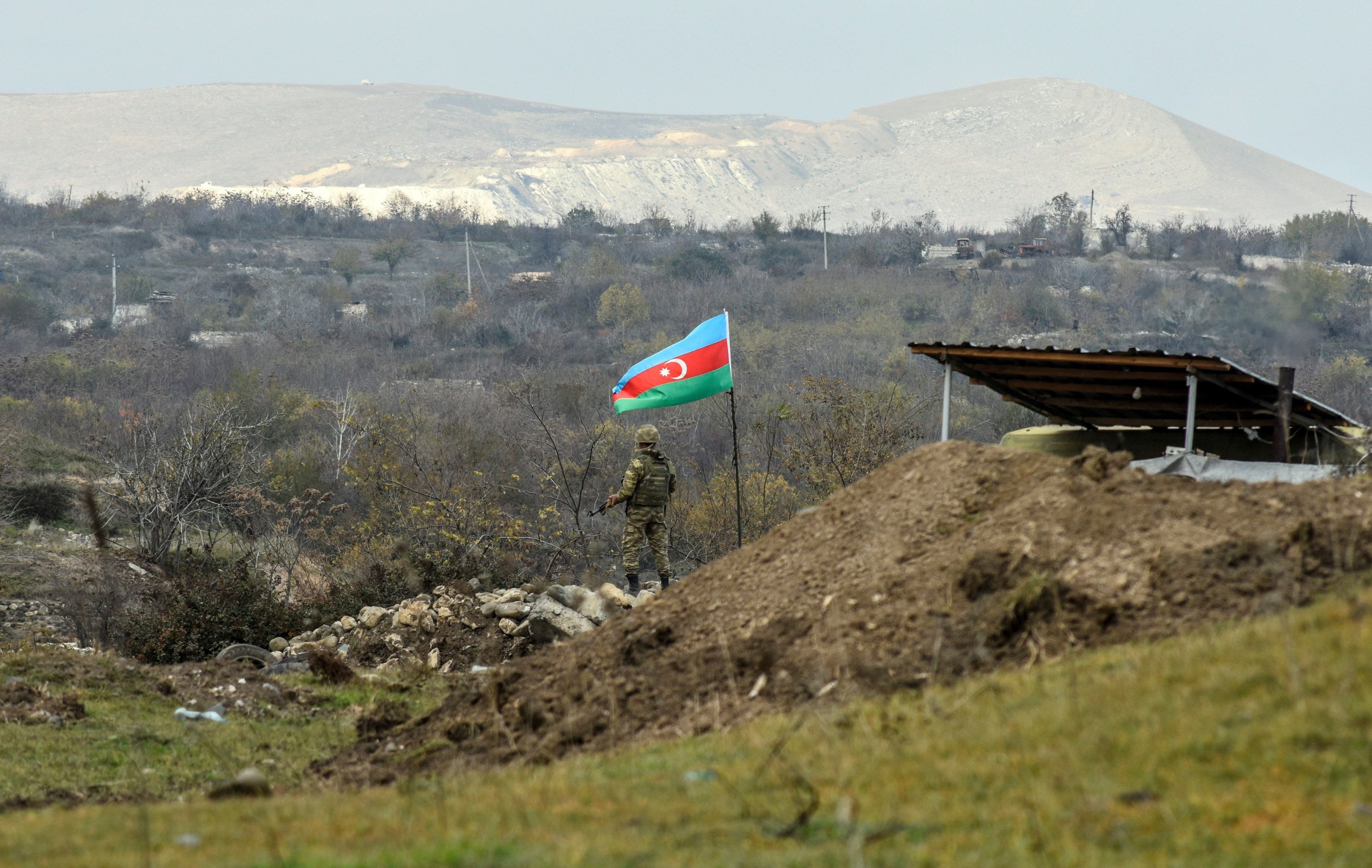 An Azerbaijani soldier stands guard at a checkpoint on a road entering the liberated Fuzuli district of Azerbaijan, December 2, 2020 / AFP Photo

President Ilham Aliyev believes there were chances to prevent the war between Armenia and Azerbaijan last year if the co-chairing countries of the Minsk Group – namely the USA, France, and Russia – had used their potential to force Yerevan to comply with UN Security Council Resolutions.

His comments came during the reception of the incoming UN Resident Coordinator in Azerbaijan on Tuesday.

In his remarks, President Aliyev said the Resolutions were a very promising gesture of support by the UN, however, they had no effect due to the lack of the implementation mechanism. Although three out of five permanent member-states of the UN Security Council (SC) are the co-chairs of the Minsk Group, he said the Group had failed to achieve any resolution to the Armenia-Azerbaijan conflict, while its 28 years of operation had been “the years of lost opportunities.”

“We wanted to resolve this issue peacefully. Speaking last year at the General Assembly just several days before the war, I was warning the international community that Armenia is preparing for war, that these were not just words for the sake of propaganda. That was a realistic analysis of Armenia’s behavior in the months prior to the war. And unfortunately, I was right,” President Aliyev said.

“If sanctions were imposed on Armenia on time, if Minsk Group co-chairs - three leading countries of the world used five percent of their potential to persuade or to force Armenia to withdraw its occupational forces, then the war would not have happened. Therefore, the responsibility for the war does not only lie on Armenia but on those who could not or did not want to force them to comply with international law," the Azerbaijani president added.

Armenia and Azerbaijan have long been at odds over the latter’s Karabakh (Garabagh) region. Following the Soviet Union’s dissolution in 1991, Armenia launched a military campaign against Azerbaijan that lasted until a ceasefire deal was reached in 1994. As a result, Armenia occupied 20 percent of Azerbaijan’s internationally recognized territories. Over 30,000 ethnic Azerbaijanis were killed, and one million others were expelled from their homes in a brutal ethnic cleansing policy conducted by Armenia.

The UN Security Council adopted four Resolutions in 1993 demanding the immediate cessation of hostilities, the immediate complete and unconditional withdrawal of the occupying forces from the Azerbaijani lands and the return of internally displaced Azerbaijanis to their native lands. Armenia's authorities, however, rejected to fulfill the Resolutions.

In the 1990s, the Organization for Security and Cooperation in Europe established the Minsk Group, a special mediation structure co-chaired by diplomats from Russia, the US and France. The main task of the Group was to help Armenia and Azerbaijan find a political end to the conflict. But the shuttle diplomacy of the co-chairs had been insufficient in fetching any solution to the conflict over decades. The authorities of Azerbaijan have repeatedly chided the Group’s activities, blaming it for not putting weight behind the efforts aimed at settling the conflict.

President Aliyev said Armenia's failure to fulfill the UN Resolutions and the lack of international pressure on Yerevan left Azerbaijan with no option, but to implement these resolutions itself within international law norms.