President Aliyev Says Azerbaijanis to Return to Zangazur after a Century 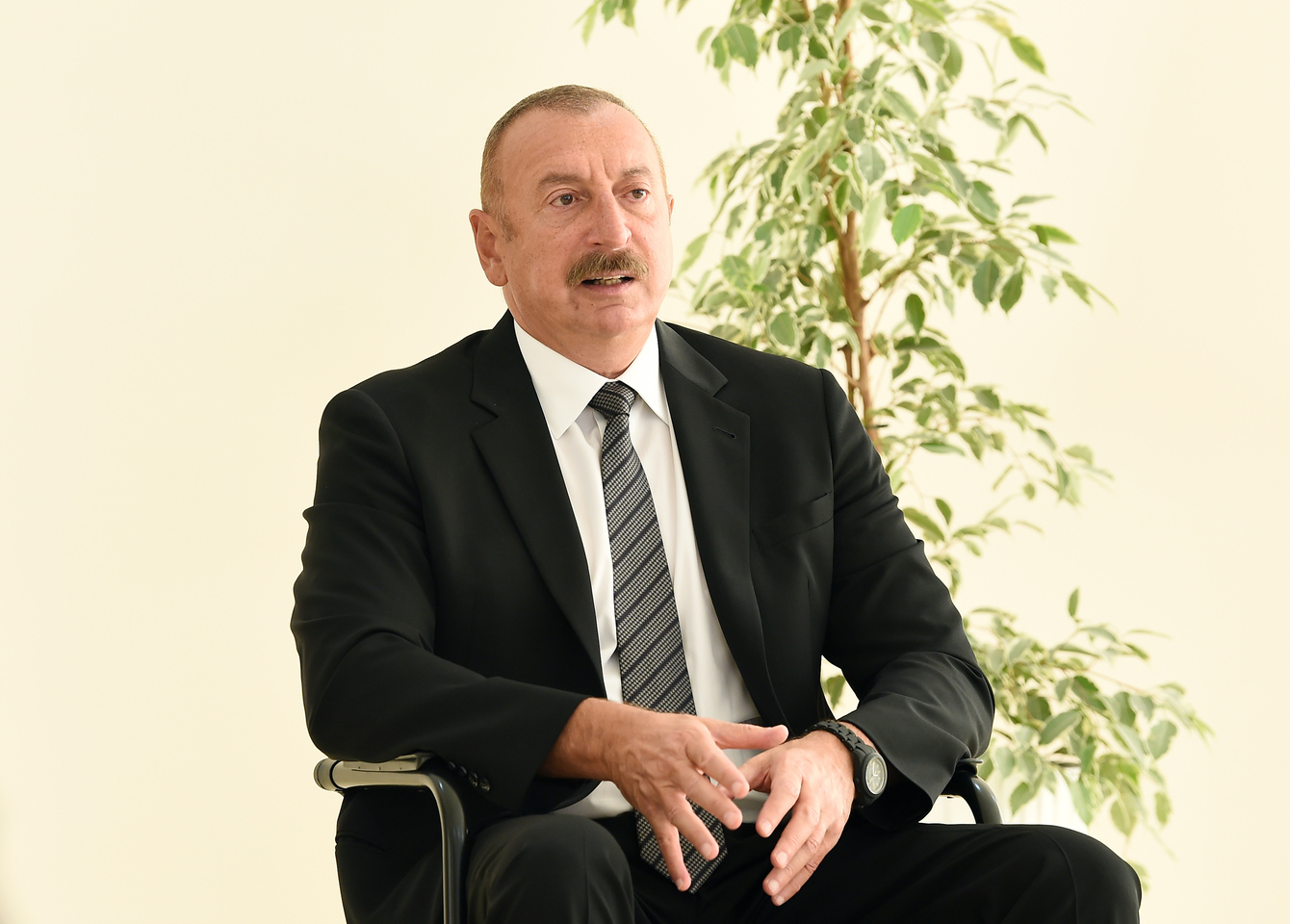 President Ilham Aliyev during a conversation with the heroes of the Second Karabakh War, Baku, Azerbaijan, July 14, 2021 / President.Az

The opening of the Zangazur corridor remains high on Baku’s agenda given its expected economic, trade and humanitarian contribution to Azerbaijan and the entire region.

President Ilham Aliyev said Zangazur is a historical Azerbaijani land and the launch of the same-name corridor will facilitate the return of Azerbaijanis to this region after more than a century. The corridor will connect Azerbaijan's mainland with its southwestern exclave of Nakhchivan.

“When all communications are opened, we, the people of Azerbaijan, will return to their ancestral land, of course. The 10 November Trilateral Declaration states: all refugees must return to their homeland. Our native land is Zangazur; our native land is Goycha district, Iravan. We will definitely return there,” President.Az quoted Aliyev as saying.

He added that the historical documents and maps showed how the Soviet government tore Zangazur apart from Azerbaijan and handed it over to Armenia 101 years ago in 1920.

Zangazur historically was an Azerbaijani region that now forms the southern part of modern-day Armenia and a portion of the territory of Azerbaijan in the country’s Zangilan, Gubadli, Jabrayil, Lachin and Kalbajar districts.

The Zangazur region, inhabited by the Turkic tribes, was a part of the Seljuk Empire during its 150-year-long rule in the 11th and 12th centuries, which has further expanded the Turkish-Islamic influence within the region. Starting from the 13th century, Zangazur was invaded by Mongol-Tatar tribes and the Timurid Empire. From the 15th century to the 18th century, the region was a part of the medieval Azerbaijani states of Garagoyunlu, Aghgoyunlu and Safavids.

Demographic changes in Zangazur took place during the reign of Tsarist Russia and the Soviet Union. As a result of the massacres committed by Armenian armed groups in 1905-1907 and 1914-1920 in Zangazur, about half a million indigenous Azerbaijanis and other Muslim locals were killed. Over these periods, 115 Muslim villages in Zangazur were destroyed.

In 1933, the territory of the Armenian SSR was divided into districts and the name Zangazur was replaced with new district names such as Gafan, Gorus, Garakilsa (Sisian) and Mehri. The modern-day Armenian section of Zangazur is known as West Zangazur in Azerbaijan.

In 1988, Azerbaijanis living in West Zangazur were forcibly expelled from their ancestral lands as part of the last phase of their illegal deportation by Armenia. Hundreds of historical, material and cultural monuments belonging to Azerbaijanis were destroyed following the brutal displacement of the Azerbaijanis through acts of terror and ethnic cleansing.

An economic zone was recently established in the eastern parts of Zangazur in Azerbaijan under a presidential decree this month. The East Zangazur economic zone includes the districts of Zangilan, Gubadli, Jabrayil, Lachin and Kalbajar that have been liberated from Armenia’s decades-long illegal occupation in 44-day war last year. The new economic zone should facilitate the reintegration of these liberated districts into Azerbaijan’s economy with the effective use of their natural resources, economic potential, and vast tourism opportunities.

The Zangilan, Gubadli, Jabrayil, Lachin, and Kalbajar have remained under Armenia’s illegal occupation since the early 1990s when Armenia and Azerbaijan fought a bloody four-year war after the Soviet Union’s dissolution. The first three districts have been liberated during the Azerbaijani army’s counter-attack operations that lasted 44 days from September 27 through November 9. Armenia returned the occupied Lachin and Kalbajar districts to Azerbaijan under the tripartite statement signed on November 10 by Armenia, Azerbaijan, and Russia to announce the cessation of hostilities.

Almost the entire infrastructure of the districts has been razed to the ground during the years of Armenian occupation. The Okhchu River and Basit River in Zangilan have been subjected to eco-terrorism. Wastes from Armenia’s chemical plants have been poured into the Okchu River putting the future existence of the river in jeopardy. Armenia's government involved local and foreign companies in the illegal exploitation of Azerbaijan’s vast gold deposits in Zangilan and Kalbajar during the years of occupation.

Azerbaijan’s government rolled out extensive rebuilding campaigns in the liberated territories post-war. The creation of the East Zangazur economic zone is seen as part of these efforts.

The new economic zone is expected to facilitate the opening of the Zangazur corridor, which starts in East Zangazur in Azerbaijan, runs through the rest of the Zangazur region in the territory of modern-day Armenia, and links to Nakhchivan, a landlocked exclave of Azerbaijan between Armenia, Iran and Turkey.

“It will expand the railway network between Russia, Azerbaijan, Turkey, and Armenia and will have a positive impact on regional trade activities. The opening of the Zangazur corridor would further strengthen the Caspian Transport Network including the “East-West” transport corridor and the 'North-South' International Transport Corridor,” Hassan Khan said.

“It would also facilitate the Oil & Gas Pipeline System extending from the Caspian to Europe. It would further enhance transit capacity of the region that has already played an important role for the European Union, the United States, Russia, and China gas supplies chains," Hassan Khan noted.

The analyst says Azerbaijan’s projects mitigate the risks of war as they establish new economic corridors through regional railway and trade networks. He added that Armenia should pave the way to a better future by prioritizing economic sustainability, political stability, and social cohesion, cooperation, coordination and collaboration.