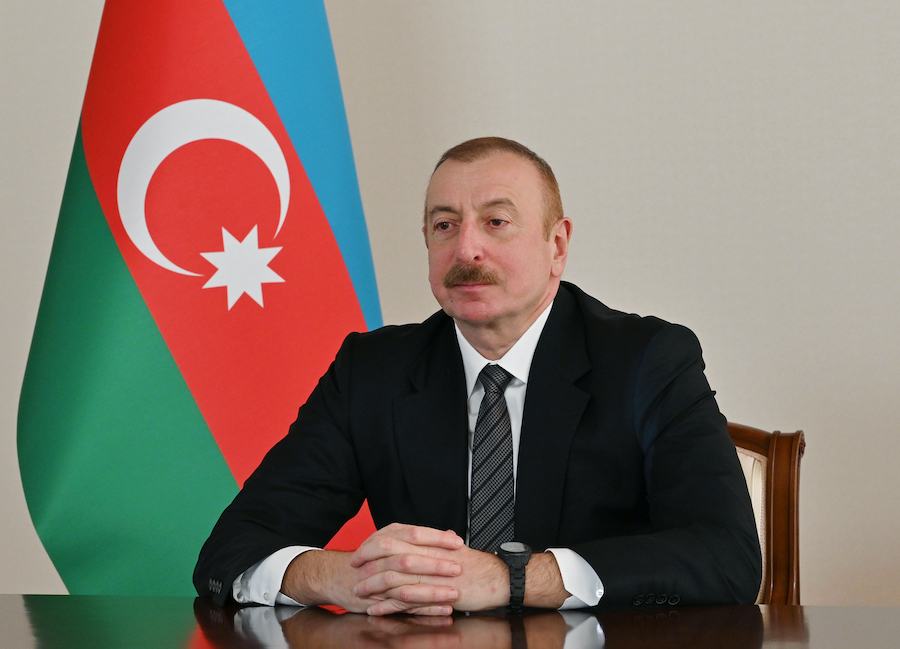 On March 3, President of Azerbaijan Ilham Aliyev has met a delegation led by Chairman Joint Chiefs of Staff Committee of Pakistan, General Nadeem Raza, in a video format. / President.Az

President Ilham Aliyev said on Wednesday that Azerbaijan wants to continue and expand its military cooperation with Pakistan.

“We are already familiar with the products of Pakistan's defense industry,” President Aliyev said as part of a video meeting with a delegation led by Chairman Joint Chiefs of Staff Committee of the Islamic Republic of Pakistan General Nadeem Raza.

“As you know, we have purchased military equipment from Pakistan and want to continue this process. At the same time, we are thinking about joint military exercises. We think this is the right time,” he added.

Ilham Aliyev further thanked Pakistan for the solidarity and support shown for Azerbaijan during the latest outbreak of war between Armenia and Azerbaijan that started on September 27. He said what Pakistan did was “an example of true brotherhood and friendship.” Pakistan is one of a few countries that does not have diplomatic relations with Armenia and has not officially recognized Armenia due to the occupation of Azerbaijani lands, according to the president.

“Our people are aware of this and we appreciate it very much. Azerbaijan, in turn, has always supported Pakistan on all other issues, including Kashmir,” Ilham Aliyev added.

The president also praised the trilateral political and defense cooperation between Azerbaijan, Turkey, and Pakistan, saying that “we will join our efforts to strengthen our positions and contribute to peace.”

Meanwhile, General Nadeem Raza also met with Azerbaijan’s Minister of Defense, Colonel General Zakir Hasanov on March 3. The Pakistani military official said that the specialists from his country are ready to get involved in the process of clearance of the liberated territories of mines and unexploded ordnance. The General also noted that there is a wide potential for elevating the military cooperation of the two countries to a “qualitatively new level.”

The meeting also focused on the main areas of military cooperation between the two countries, including the possibility of conducting joint military exercises with the involvement of various types of troops, including the Special Forces of the Azerbaijan Army and Pakistani Armed Forces. 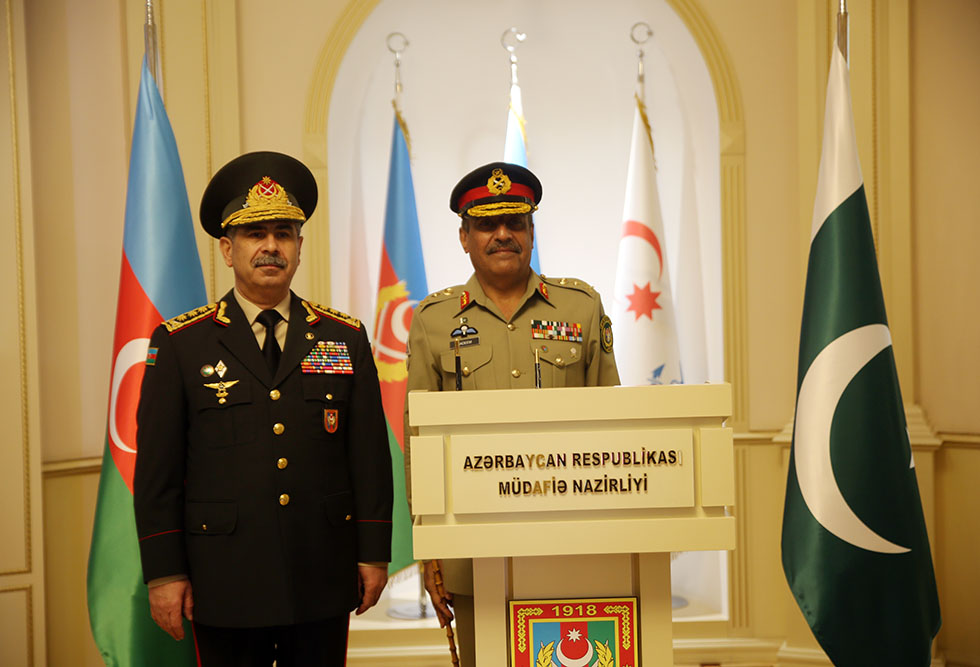 Diplomatic relations between Baku and Islamabad were established in 1992. Pakistan was the second country, after Turkey, to recognize Azerbaijan’s independence, following the collapse of the USSR in 1991.

Pakistan has not recognized Armenia, which also became independent after the dissolution of the Soviet Union, due to the occupation of Azerbaijani lands. Pakistan also demands justice for the Khojaly genocide committed by Armenian forces in February 1992 against the Azerbaijanis.

During the 44-day war between Armenia and Azerbaijan, Pakistan’s Foreign Ministry Spokesman Zahid Hafeez Chaudhri described the Armenian aggression as “reprehensible and most unfortunate,” and denied “speculative and baseless” media reports claiming the Pakistan Army was fighting alongside Azerbaijani forces against Armenia in Azerbaijan’s Karabakh region.

On October 10, General Nadeem Raza said in a meeting with Azerbaijan’s Ambassador to Pakistan Ali Alizada that Pakistan Armed Forces fully support Azerbaijan’s position over its Nagorno-Karabakh region, which is “in line with the several unanimously adopted United Nations Security Council resolutions.”

Armenia and Azerbaijan were locked into a decades-old conflict over the Nagorno-Karabakh (Daghlig Garabagh) region, which is an internationally recognized territory of Azerbaijan. Following the Soviet Union’s dissolution in 1991, Armenia launched a military campaign against Azerbaijan that lasted until a ceasefire deal was reached in 1994. By that time, Armenia occupied 20 percent of Azerbaijan’s internationally recognized territories including the Nagorno-Karabakh region and seven surrounding districts. Over 30,000 ethnic Azerbaijanis were killed and one million were expelled from those lands in a brutal ethnic cleansing policy carried out by Armenia. Although the UN Security Council adopted four resolutions in 1993 demanding the immediate withdrawal of the occupying forces from the Azerbaijani lands and the return of internally displaced Azerbaijanis to their native lands, Armenia failed to comply with all four legally binding documents.