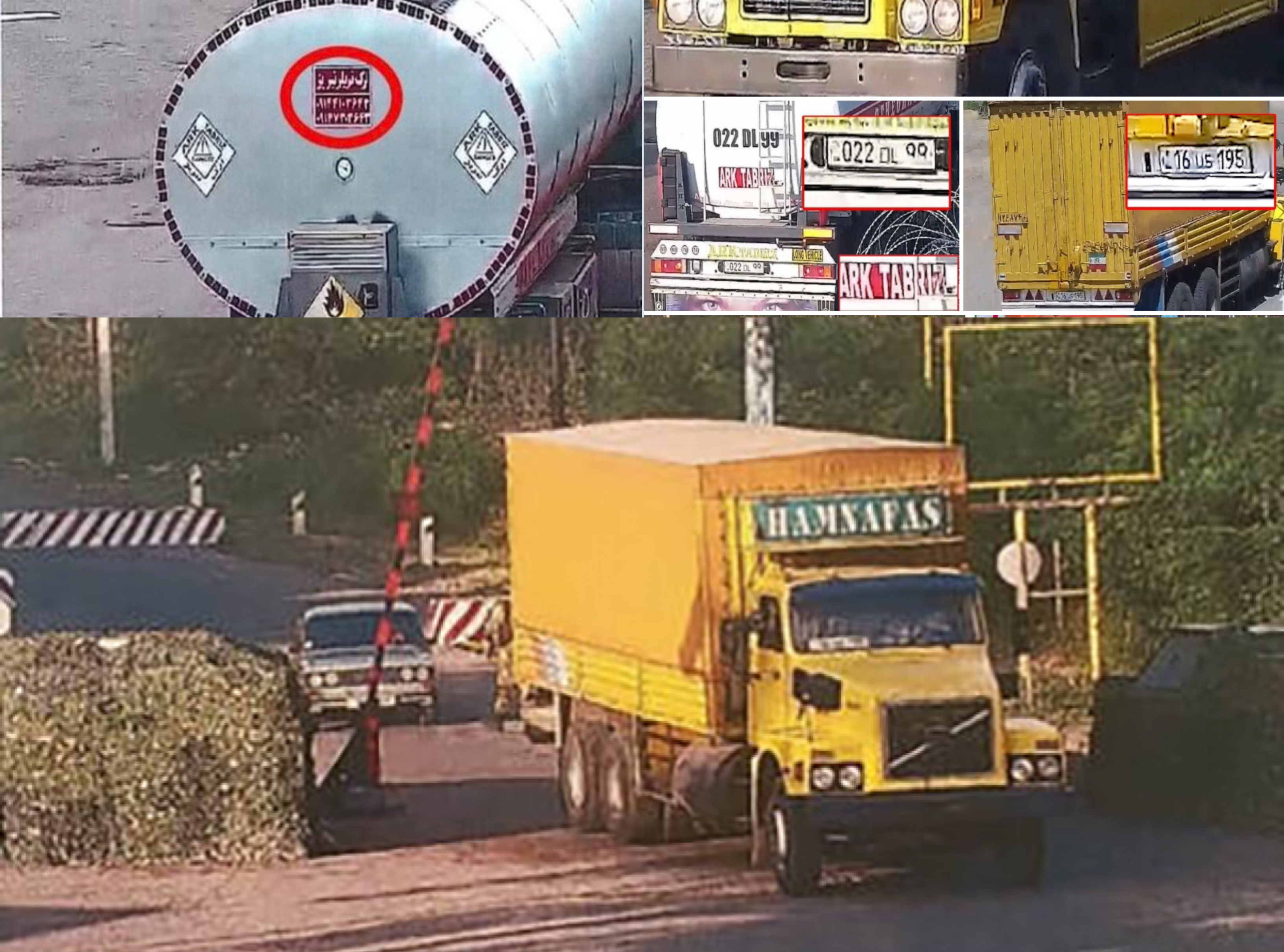 Iranian trucks have been seen entering illegally the Karabakh region of Azerbaijan. / Courtesy

President Ilham Aliyev says illegal trips by Iranian lorries to certain parts of the Karabakh (Garabagh) region monitored by Russian peacekeepers are disrespectful to the territorial integrity of Azerbaijan.

Azerbaijan’s president made comments in an interview with the Turkish state-run Anadolu Agency media organization on Monday.

“This is not the first time that Iranian trucks have entered the Karabakh region. It has happened several times during the occupation. These trucks went there on a regular basis,” President Aliyev said.

“We saw that trucks keep traveling there even after the war. So I instructed our Presidential Administration to speak to the Iranian Ambassador to Azerbaijan. We did not want to give this an official coloring,” he added, referring to the last year’s Armenia-Azerbaijan war in the latter's Karabakh region.

“Then, of course, we began to monitor the situation and by the beginning of each month we collected information on how many trucks have entered and how many have left, what they brought in and took out. We have all the information, including their license plates, and they have been published in the media. But what happened after that? They tried to attach Armenian license plates to Iranian trucks. They committed this falsification in an attempt to deceive us.”

News of illegal shipments from Iran to the Azerbaijani territories, where the Russian peacekeeping forces are temporarily deployed, has been making headlines for several months.

According to data compiled by the Azerbaijani government, around 60 Iranian trucks illegally traveled to Azerbaijan’s Karabakh region from August 11 to September 11, 2021. The trucks moved reportedly from Iran to Armenia, then to the Karabakh region via the Lachin corridor. Raoul Lowery Contreras, an internationally recognized author, claimed that they were loaded primarily with gasoline and other petroleum products.

On August 11, Iran’s ambassador to Azerbaijan received a Note Verbal from the foreign ministry in addition to an earlier verbal notification about Baku’s dissatisfaction with the illegal transit of goods to the Karabakh region. However, the verbal notification and Note Verbal were ineffective in settling the controversy. Therefore, Azerbaijani police, customs, and border posts have been stationed on the route used for shipments.

“Thus, we began to control the road leading to Armenia through the territory of Azerbaijan, after which the entry of trucks into Karabakh was stopped. But it begs the question: was it worth it to bring matters to this point? Today, only 25,000 people live there, in the Karabakh region under the responsibility of the Russian peacekeeping forces. Is this market really so important? Is this trade really so significant that you display such blatant disrespect for a country you consider friendly and fraternal?” the president said, adding that Baku remained committed to international conventions and international law by taking necessary measures.

According to media reports, Azerbaijan police started checking the Iranian trucks' documents on the Azerbaijani part of the interstate Gorus-Gafan highway starting on September 12, 2021. On September 15, two truck drivers were detained by the police for illegally crossing into the territory of Azerbaijan.

On September 24, the Iranian ambassador to Azerbaijan, Syed Abbas Mousavi, said the trucks transporting goods to Azerbaijan’s Karabakh region belonged to private companies, and they have been warned by the government “immediately after receiving official information from Azerbaijan.” In the light of military drills, Mousavi said the information about the exercises was provided to the Azerbaijani side many months ago.

However, President Aliyev said the military drills along the Iran-Azerbaijan state border were “surprising.”

“Why now? Why exactly on our border? These questions are being asked by the Azerbaijani public, not me. Azerbaijanis of the world are asking about this. They are also questioning why no exercises were carried out in this region during the years of occupation? Why weren’t any exercises held when the Armenians were in Jabrayil, Zangilan and Fuzuli? Why are they being held after we have liberated our lands and put an end to 30 years of oppression and occupation?” President Aliyev said in the interview.

In the meantime, Tehran Times dubbed Iran’s military drills “a clear show of force” by Tehran.