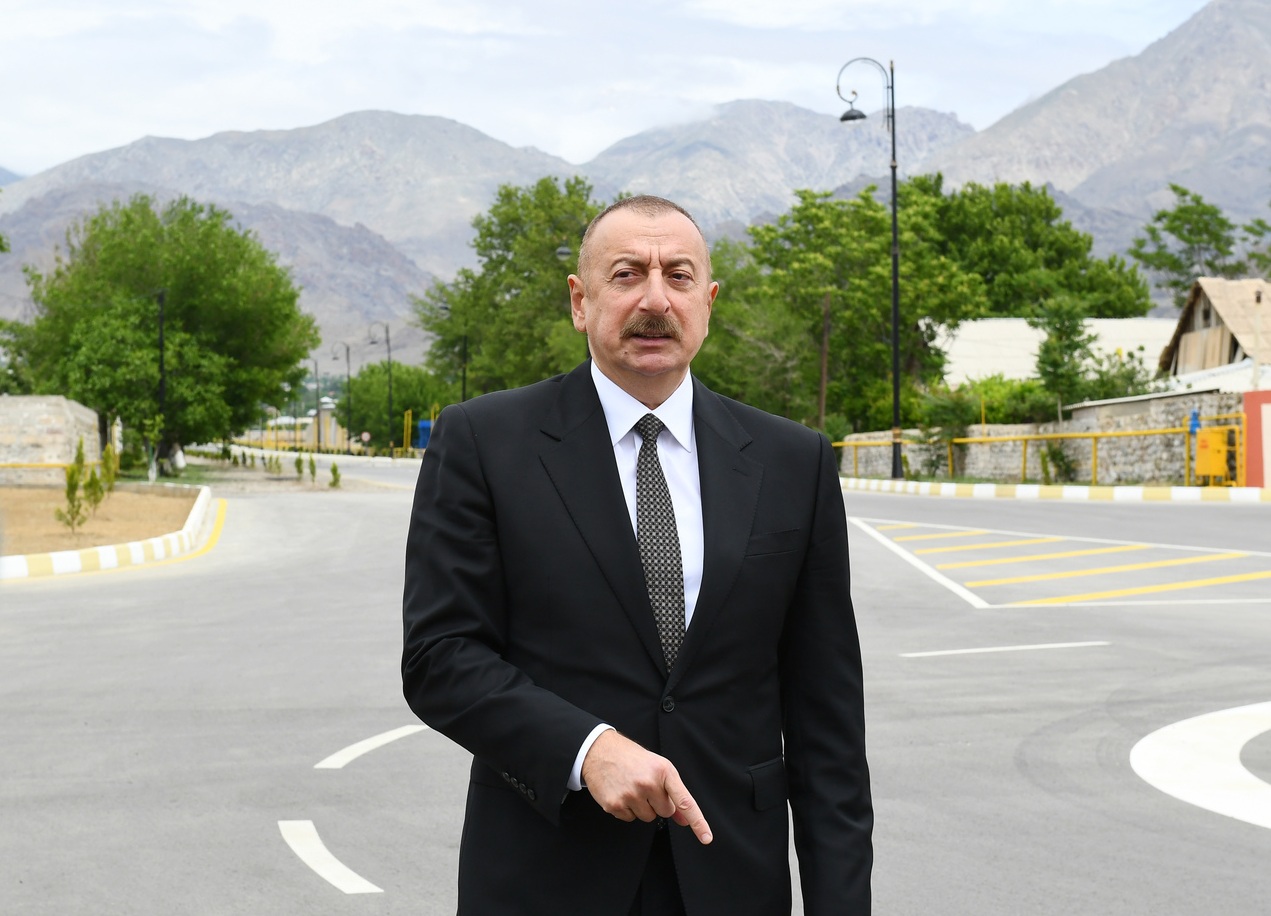 President Aliyev gives interview to state TV channel during his visit to the Nakhchivan Autonomous Republic, an exclave of Azerbaijan, May 10, 2021 / President.Az

Azerbaijan’s President Ilham Aliyev has reiterated his position that the Nagorno-Karabakh conflict is resolved after Azerbaijan claimed a decisive victory over Armenia in a six-week-long war last year.

Armenia raised a white flag, surrendered, and signed an act of capitulation as a result of the war, according to Aliyev.

“There is no territorial unit called Nagorno-Karabakh in Azerbaijan. The conflict has been resolved, and I think that there is no point in returning to this issue. In any case, we showed it during the post-war period,” President.Az quoted Aliyev as saying. “If this conflict is not resolved, then how should this conflict be resolved? Does this mean that the Statement signed on 10 November has lost its force? This is how I can understand this. On 10 November, a document was signed on the de facto settlement of the conflict.”

The document referred to by President Aliyev is a tripartite statement signed by Armenia, Azerbaijan, and Russia on November 10, 2020. The agreement ended a 44-day-long war between Armenian and Azerbaijan forces in the latter’s Karabakh region. By the statement’s signing, Azerbaijani troops liberated over 300 settlements, including five major cities in the Karabakh region that had been kept under occupation by Armenia since the early 1990s.

The trilateral agreement confirmed Azerbaijan’s territorial regains. Armenia also returned the occupied Aghdam, Kalbajar, and Lachin districts to Azerbaijan as part of its obligations it took under the agreement. Russia assumed the peacekeeping role by deploying a contingent of 1,960 peacekeepers in the region as part of the document.

President Aliyev said there should be no talks about the so-called status of Nagorno-Karabakh after the victory of Azerbaijan, adding that those who want to give Armenians living in Azerbaijan a status, can do it in their own territories, but not in Azerbaijan.

“Let them give them an autonomy or independence there, not in Azerbaijan. This will not happen in Azerbaijan. Therefore, I would advise them not to make any statements about the status or conflict so as not to irritate us and strain our relations,” Aliyev said.

Meanwhile, despite the ongoing ceasefire and Azerbaijan’s efforts aimed at reinvigorating the war-torn Karabakh region, some government and opposition groups in Armenia have reportedly voiced revanchist thoughts and made statements on the return of Shusha. Shusha is a key city in the Karabakh region, which was liberated from Armenian occupation by Azerbaijani forces on November 8, 2020. The military operation had a crucial impact on the retreat of Armenia’s forces and the end of the war.

“There is no power, resolve or moral right in Armenia to keep such revanchist ideas alive. This would be tantamount to suicide for them. I want to say again that we are following these statements for the time being. Both the government and the opposition in Armenia, almost all elements involved in politics are voicing their views on the return of Shusha, on the return of Hadrut. We are still showing restraint. But they shouldn’t play with fire.”