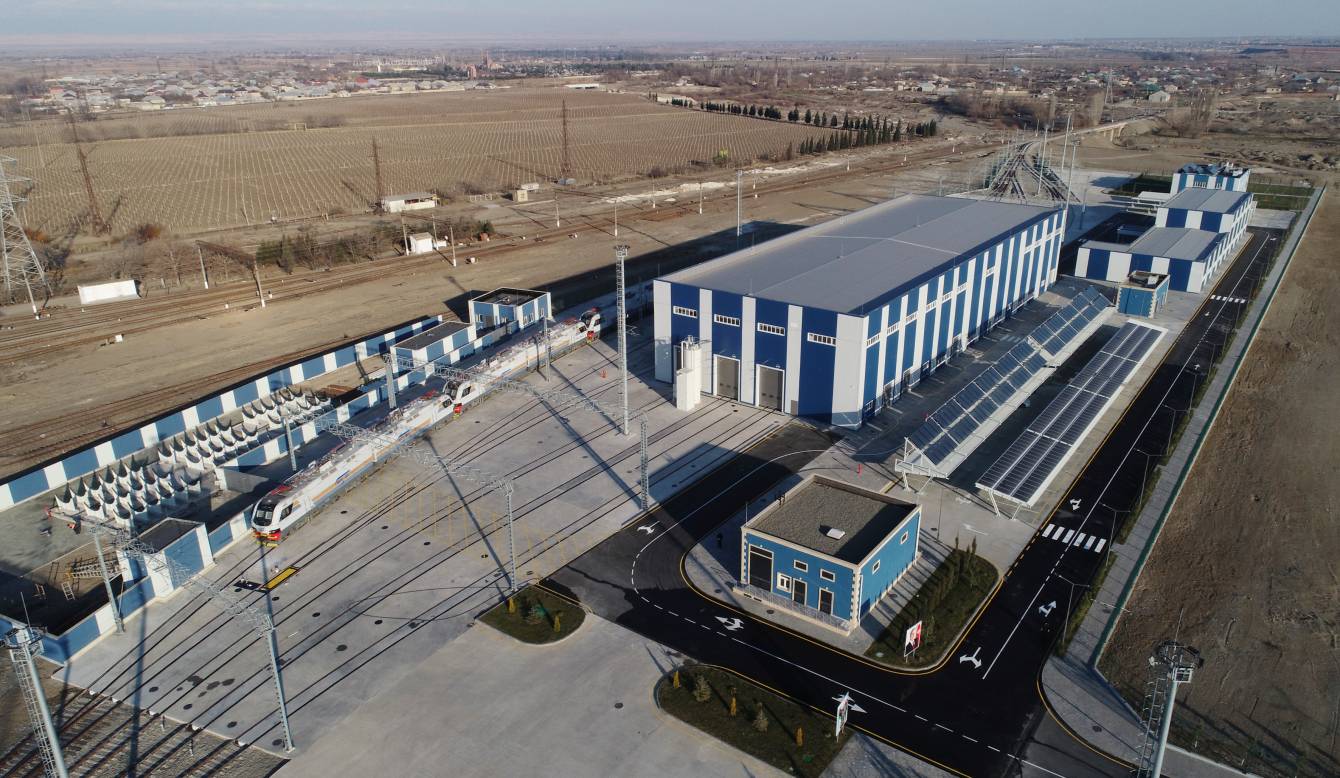 The locomotive depot of the Azerbaijan Railways Company was one of the facilities inaugurated by President Ilham Aliyev in the Gandja city of Azerbaijan, January 30, 2022 / President.Az

Azerbaijani President Ilham Aliyev officially launched a series of social and infrastructure projects in the country's second-largest city of Gandja on January 30.

President Aliyev laid the foundation of the Memorial Complex, which honors civilians who were killed by the Armenian forces in Gandja during the Second Karabakh War in 2020.

“During the Second Karabakh War, Gandja was repeatedly bombed by the criminal Armenian army. Thirteen rockets were fired at the city, eight of which exploded, unfortunately killing people,” he said, adding that the Armenian troops launched “Tockha-U” and Scud missiles at the city.

“Our citizens who died due to this cowardly shooting should not have died. Among them were children, women, and the elderly. Six children died. In the city of Gandja alone, 26 civilians were killed by cowardly fire, and they are the victims of Armenian fascism.”

President Aliyev said the Memorial Complex will cover an area of about four hectares (9.8 acres) including the buildings that were demolished as a result of the Armenian ballistic missile attacks, which would testify to the outcomes of Armenian fascism. Armenian forces targeted Gandja with missile fire five times in October 2020. Azerbaijani authorities described the bombardments of the city as a massacre and war crime masterminded by the military-political leadership of Armenia.

Armenia and Azerbaijan had long been at odds over the latter’s Karabakh (Garabagh) region. Following the Soviet Union’s dissolution in 1991, Armenia launched a military campaign against Azerbaijan that ended with a ceasefire deal in 1994. As a result of the bloody war, Armenia occupied 20 percent of Azerbaijan’s internationally recognized territories. Over 30,000 Azerbaijanis were killed, and one million others were expelled from those lands in a brutal ethnic cleansing policy carried out by Armenia.

On September 27, 2020, the decades-old conflict between the two countries spiraled after Armenia’s forces deployed in the occupied Azerbaijani lands shelled military positions and civilian settlements of Azerbaijan. During the counter-attack operations, Azerbaijani forces liberated over 300 settlements, including the cities of Jabrayil, Fuzuli, Zangilan, Gubadli and Shusha, from a nearly 30-year-long illegal Armenian occupation. The war ended in a tripartite statement signed on November 10, 2020, by Armenia, Azerbaijan and Russia. Under the statement, Armenia also returned the occupied Aghdam, Kalbajar, and Lachin districts to Azerbaijan.

The inauguration of the second regional “ASAN xidmət” Center in Gandja during the president’s visit is seen as strong momentum in improving the public and private services to 336,000 people living in the city and around 700,000 in the surrounding regions. President Aliyev said the center’s opening came in response to the growing demand observed over the past years. ASAN is a one-stop-shop social service and innovations platform offering over 300 public and private services in Azerbaijan, enabling a full menu of government-to-citizen services, from municipal record-keeping to visa processing for tourists.

Founded in 2012, the system received more than 7.6 million citizens and processed over 48 million applications for various services as of December 2021. According to opinion polls, the satisfaction rate of the “ASAN xidmət” Centers among citizens is 99.5 percent. With the newly inaugurated facility in Gandja, the service network of ASAN now contains 22 centers, including six in the capital Baku and others in the regions of the country.

The launch of the locomotive depot of the Azerbaijan Railways Company in Gandja by President Aliyev has almost remodeled the city’s role as a transportation hub along the East-West Transport Corridor passing through it. A two-story platform in the main repair zone of the depot allows to refit 6 locomotives simultaneously and uninterruptedly. The locomotive depot is equipped with cutting-edge equipment and devices procured from the United States, Germany, the United Kingdom, the Netherlands, Italy, Turkey, the Republic of Korea, China, Russia, and a number of other countries. Part of the power generation at the facility will be provided by 350 solar panels.

President Aliyev has also cut the red ribbon of the new building of the Drama Theater in Gandja and toured the construction site of the Gandja Sports Palace. The facility will reportedly be the largest of its kind in Azerbaijan offering a wide variety of major sports such as martial arts, wrestling, boxing, basketball, volleyball, and handball, as well as swimming.

“As a result of the implementation of state programs for the socio-economic development of the regions, the city of Gandja has always had a special place. This is the case today, and it will be the case in the future,” President Aliyev said.