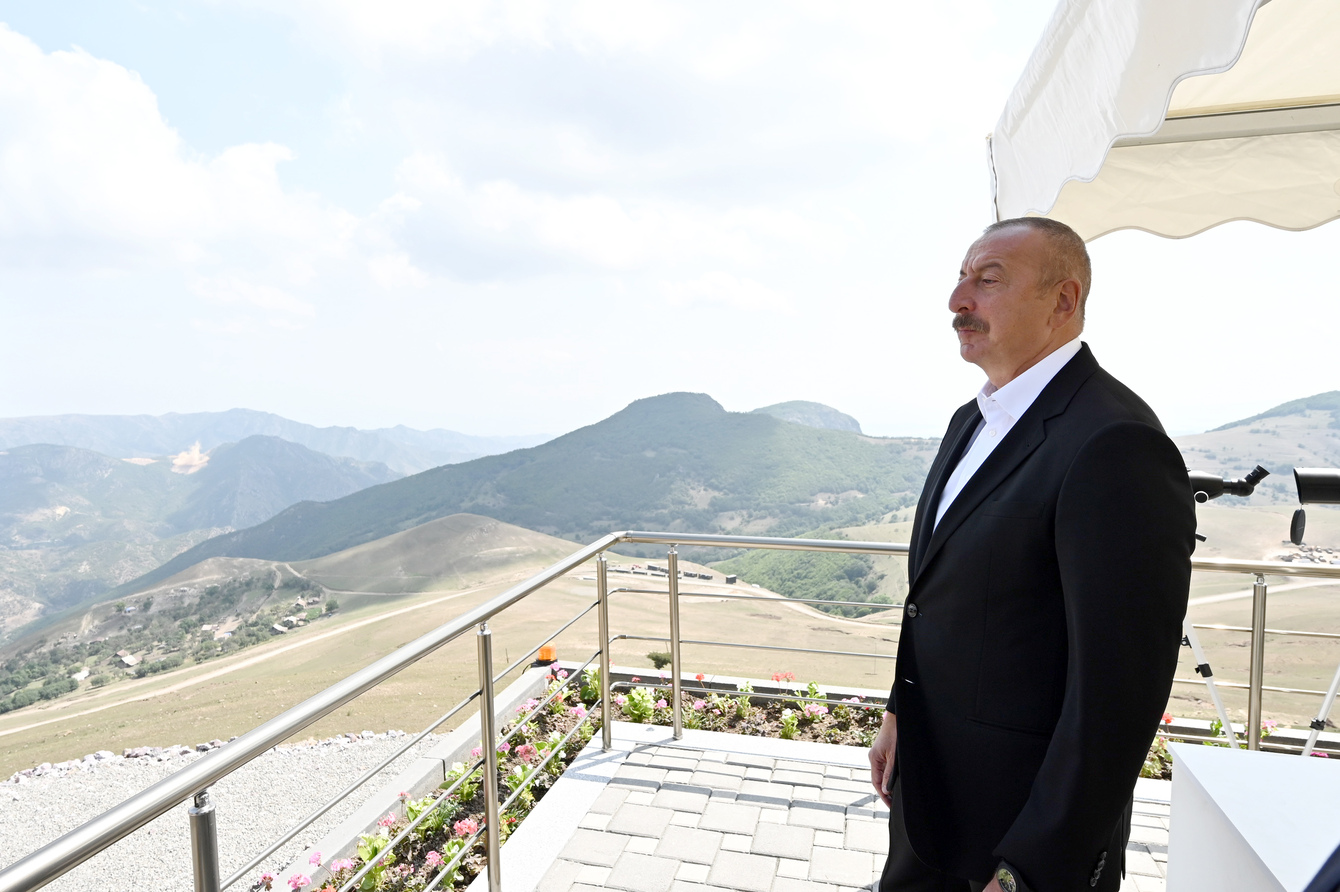 President Aliyev visited the western regions of Azerbaijan, where he gave an interview to the Azerbaijan Television, July 23, 2021, Dashkasan, Azerbaijan / President.Az

Azerbaijani President Ilham Aliyev dismissed the status claims of Armenians living in what they call the “Nagorno-Karabakh” region as he says there are no legal, political, and historical grounds for this.

“There is neither a status nor Nagorno-Karabakh. The Nagorno-Karabakh autonomous region was established on 7 July 1923 as an artificial formation,” he said in an interview with the Azerbaijan Television on Thursday.

“The Armenians represented in the Soviet government at the time simply made this illegal and completely unfounded decision, and Soviet Azerbaijan, of course, had to agree and come to terms with that at that time. Nobody even asked us. But it was a completely unfounded and artificial entity.”

President Aliyev explained that the establishment of the Nagorno-Karabakh autonomous region on July 7, 1923, was a provocation committed by the Soviet government to artificially create a permanent hotbed of conflict in Azerbaijan. According to the President, the creation of the Nagorno-Karabakh autonomous oblast (region) on the historical lands of Azerbaijan, the proclamation of the village of Khankendi as its center, and naming it after the Armenian executioner Shaumyan was an extremely negative step towards the Azerbaijani people.

“As for the status, 25,000 people live there today. We have fairly wide and varied information about the processes taking place there,” he said. “What is the logic behind creating a status for 25,000 people?”

“If someone wants to grant a status – there are about a million Armenians living in America, more than 500,000 in France, more than 100,000 Armenians in Marseille and around it – why isn’t the status being granted there? Why should it be granted in Azerbaijan? What are the legal, political, and historical grounds for this? None!”

The so-called “Nagorno-Karabakh” region forms part of the Karabakh (Garabagh) region, which is an internationally recognized territory of Azerbaijan. In the 18th century, Tsarist Russia relocated Armenians from Iran, Turkey, and other eastern countries to some parts of the Karabakh region. Renowned Russian journalist and geopolitical expert Nikolai Shavrov wrote in 1911 that over one million out of 1.3 million Armenians who lived in Transcaucasia (South Caucasus) did not belong to the indigenous population of the region and were settled by the Russian Empire.

Separatist sentiments in the highland part of the Karabakh region of Azerbaijan rose after the territory was given the status of autonomous oblast (region) within Azerbaijan by the Soviet rulers in 1923. Khankendi was announced as the administrative center of the region, replacing the city of Shusha. The ancient Azerbaijani name for the city, Khankendi, refers to the word “kənd,” which means village and khan, and has roots in the khanate period in Azerbaijan’s history, between the mid-17th to the mid-19th centuries. The Armenian name for the city, Stepanakert, is quite younger than Khankendi, and it comes from the name of the Bolshevik murderer Stepan Shaumyan and the word “kert,” which means “city.”

As a result of continuous relocation to the region, Armenians began to claim the Azerbaijani lands as their own. Anti-Azerbaijan sentiments expanded over the years until the late 1980s and early 1990s when they transformed into an all-out war between Armenia and Azerbaijan. Following the Soviet Union’s dissolution in 1991, Armenia launched a military campaign against Azerbaijan that lasted until a ceasefire deal in 1994. As a result of the war, Armenia occupied 20 percent of Azerbaijan’s internationally recognized territories. Over 30,000 ethnic Azerbaijanis were killed, and one million were expelled from those lands in a brutal ethnic cleansing policy carried out by Armenia.

The tripartite agreement addressed the deployment of a Russian peacekeeping contingent consisting of 1,960 servicemen, 90 armored personnel carriers, and 380 units of an automobile and special equipment in the Armenian-inhabited part of Azerbaijan’s Karabakh region, including the city of Khankendi. The ongoing mission of the peacekeepers in the region is scheduled for five years with the possibility of extension unless any of the signatory parties object to this extension six months before the expiration of the current period.