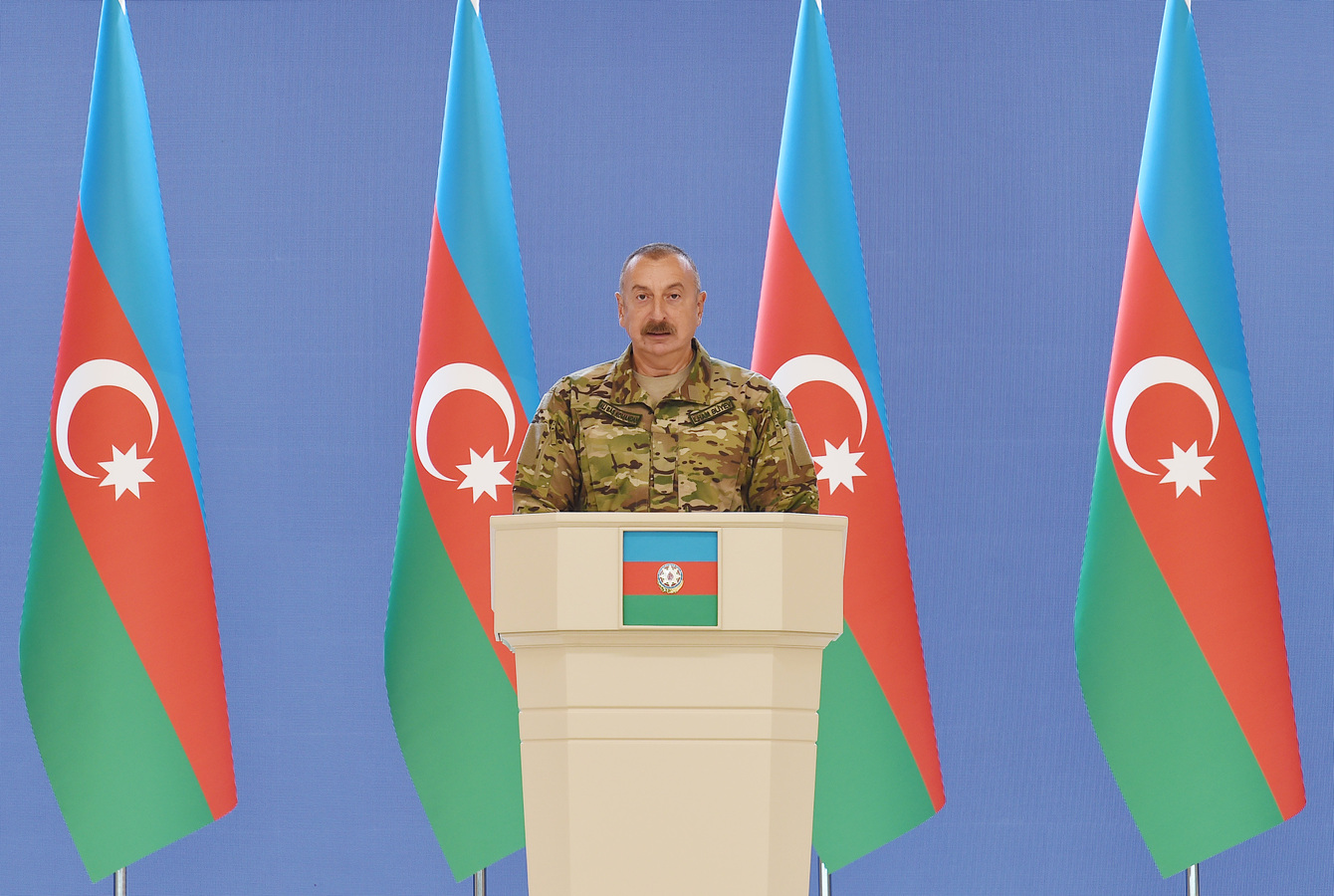 President Ilham Aliyev delivered a speech in a meeting with the top military officials of the country, Baku, Azerbaijan, June 26, 2021 / President.Az

Post-conflict developments in South Caucasus were high on Azerbaijani President Ilham Aliyev’s agenda in a meeting on Saturday with the top officials of the country’s defense ministry.

“We did not want war. We do not want it today either. I think that various initiatives should be put forward in our region, in the South Caucasus, to reduce the risk of war to zero,” he said. “We are ready for that. We do not need war. We have achieved what we wanted, and a new era has already begun for us – an era of construction, an era of restoration of our lands.”

After the last year’s war with Armenia in the Karabakh (Garabagh) region, Azerbaijan has already shown its determination to build and ensure lasting peace in the region, where the risks of war are reduced to zero and neighbors live in peaceful coexistence.

President Aliyev noted that it was now time for Armenia to demonstrate its behavior and approach to regional issues, most of which have been realized without Yerevan’s participation, including communication, energy and transport projects.

Armenia's authorities have long been seeking a so-called “status” to the illegal separatist regime that was deployed in the once occupied Karabakh region of Azerbaijan. They have been demanding a “right to self-determination” for Armenian people living in Azerbaijani territory. The Azerbaijani authorities offered them cultural autonomy inside Azerbaijan similar to what is seen in Scandinavian Aland Islands and Italian South Tyrol district. However, they rejected everything calling for independence and Azerbaijan’s recognition of the illegal separatist regime as an independent entity.

Meanwhile, despite the ongoing ceasefire and Azerbaijan’s efforts aimed at rebuilding the war-torn Karabakh region, some government and opposition groups in Armenia have reportedly vowed to “liberate Shusha". The Azerbaijani city of Shusha is key to the Karabakh region. Azerbaijani forces ended the decades-old illegal Armenian occupation of Shusha on November 8, 2020 during an operation that was crucial in forcing the retreat of Armenian forces and ending the hostilities.

Azerbaijani authorities have repeatedly warned their Armenian counterparts about the grave consequences of Armenia's revanchist campaign. President Aliyev earlier said it would be a “suicide” for Armenia to act on such words given the destruction of the country’s military in the last year’s 44-day war.

The war in the Karabakh region last year was the latest outbreak of violence between Armenia and Azerbaijan since a ceasefire between the countries was signed in 1994. The most recent war was triggered on September 27, 2020, when Armenia’s military deployed in the once occupied territories of Azerbaijan shelled the civilian settlements and military positions of Azerbaijan prompting immediate counter-offensive measures by Azerbaijani forces. Clashes between the two sides escalated into an all-out war.

Azerbaijani forces liberated over 300 settlements, including the cities of Jabrayil, Fuzuli, Zangilan, Gubadli, and Shusha, from nearly 30-year-long illegal Armenian occupation. The war ended in a tripartite statement signed on November 10 by Armenia, Azerbaijan, and Russia. Under the statement, Armenia returned the occupied Aghdam, Kalbajar, and Lachin districts to Azerbaijan.

The war inflicted heavy losses on military equipment of Armenia. The total cost of the Armenian army's military equipment destroyed, captured, and found abandoned by the Azerbaijani forces accounted for $4.08 billion, according to data compiled by the researchers at the Economic Research Institute of the University of Economics of Azerbaijan.

President Aliyev said the Karabakh conflict is over and the Armenia-Azerbaijan borderline, which was out of Azerbaijan’s control for decades due to the illegal occupation of the Karabakh region, should be determined.

“Armenia must accept it and work with us to determine the borders. A working group on delimitation should be established. There must be preparations for a peace agreement. We are declaring that” he stated.

Azerbaijani forces have been taking border protection measures after the last year’s war. However, the Armenian authorities have been introducing the moves as a violation of its state frontiers. Yerevan has reportedly appealed to the Collective Security Treaty Organization military bloc, of which it is a member, regarding its claims. Azerbaijani authorities said there was no border violation and the border protection measures by the Azerbaijani troops were carried out in line with the maps available both to Baku and Yerevan.