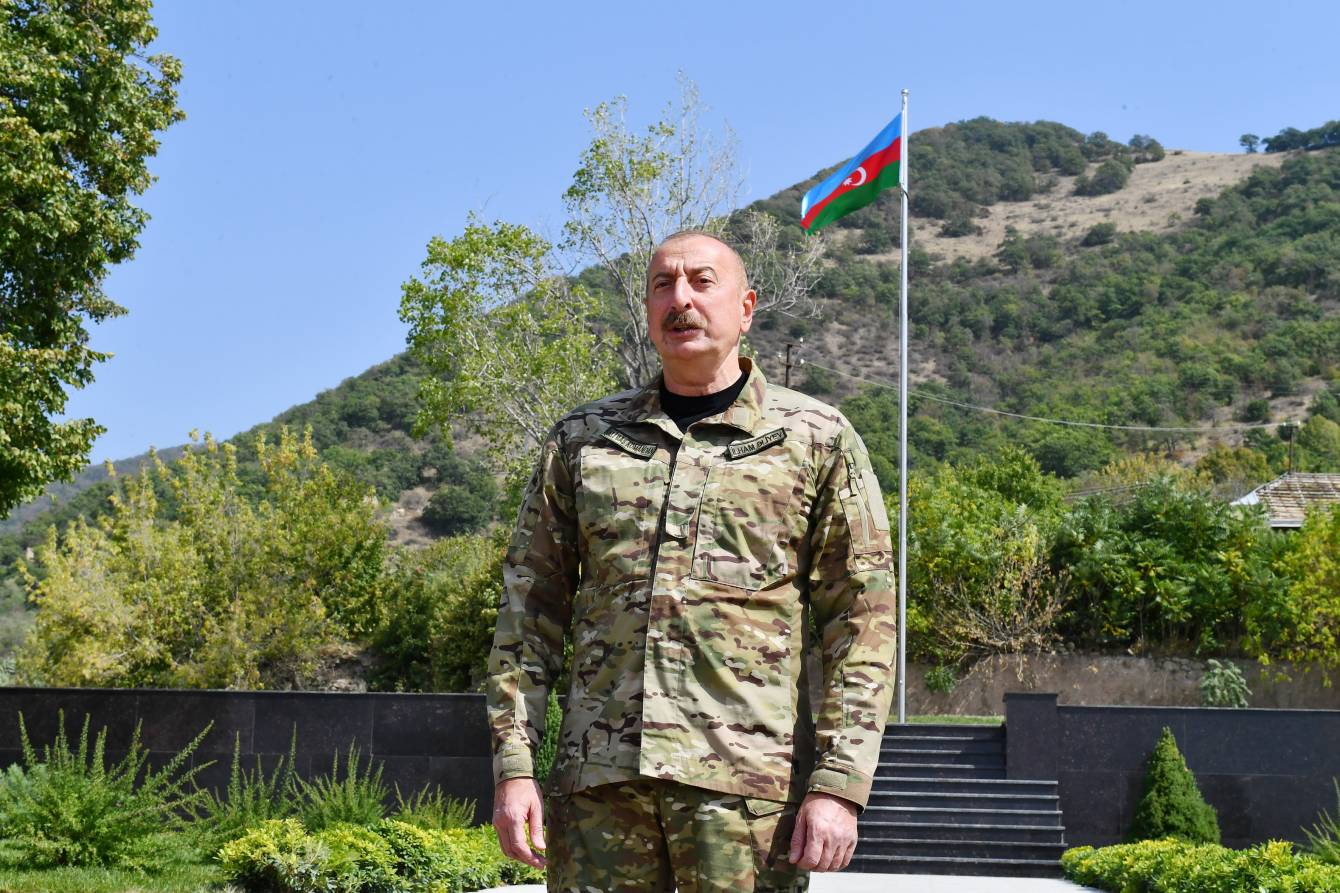 President Ilham Aliyev said claims of Azerbaijani invasion of Armenia’s territory as a result of recent border clashes are groundless since the Azerbaijan-Armenia state border is yet to be delimitated.

The remarks of the president came during his speech in Lachin city, where he raised the Azerbaijani flag, on Wednesday.

President Aliyev said without border delimitation, no one can claim where the border passes.

“If Armenia wants to accuse us of entering their territory, there is no basis for that. First, if the border was where they [Armenia] said it was, they should have established the border, built border lines, established communications and carried out engineering work,” he said, according to the presidential press service.

“We are ready for discussions and approach the work of delimitation commissions, the Azerbaijan-Armenia commissions, with great responsibility. We have collected all the maps. I want to say again that we have all the maps, including those from the 19th century, the 20th century and even earlier, and those maps clearly show who is sitting on which land. Therefore, no one can accuse us in the absence of delimitation.”

The president referred to the latest escalations on the Armenia-Azerbaijan border, which took place between September 12 and 14. The clashes saw Azerbaijani troops suppressing the armed provocations of the Armenian military. The clashes erupted following the shelling and sabotage attempts of Armenia’s army at night from September 12 to 13. In addition to targeting the military and civilian positions in Azerbaijan, Armenia also dispatched a group of saboteurs to mine the territories and supply routes used by the Azerbaijan Armed Forces units.

A total of 80 and 282 servicemen of the Azerbaijani army have been killed and wounded, respectively, during the military operations to push back the Armenian offensive.

“We are on our land, and we are protecting our land. Our positions along the border allow us the opportunity to anticipate any Armenian provocation and take necessary measures. We are in favorable positions on the Azerbaijan-Armenia border from Mount Murov to the Araz River,” President Aliyev said referring to the Azerbaijani western borderline from north to south.

“These positions give us a military advantage and the possibility of visual control over a vast area, including control over essential communication lines. We are already based in these areas. We didn’t have access to these borders for 30 years.”

The significant part of the state border of Azerbaijan with Armenia, measuring 1,007 kilometers in length, remained out of the country’s control for nearly 30 years after Azerbaijan's Karabakh (Garabagh) and East Zangazur regions fell under the illegal Armenian occupation in the early 1990s.

Following the Soviet Union’s dissolution in 1991, Armenia launched a full-blown military campaign against Azerbaijan, marking the longest and deadliest war in the South Caucasus region. The bloody war ended with a ceasefire in 1994, which saw Armenia forcibly occupying 20 percent of Azerbaijan’s internationally recognized territories. Over 30,000 Azerbaijanis were killed, and one million others were expelled from those lands in a brutal ethnic cleansing policy conducted by Armenia.

On September 27, 2020, the decades-old conflict between the two countries took a violent turn after Armenian forces deployed in occupied Azerbaijani lands shelled military positions and civilian settlements of Azerbaijan. During counter-attack operations that lasted 44 days, Azerbaijani forces liberated over 300 settlements, including the cities of Jabrayil, Fuzuli, Zangilan, Gubadli and Shusha, from a nearly 30-year-long illegal Armenian occupation. The war ended in a tripartite statement signed by Armenia, Azerbaijan and Russia on November 10, 2020. Under the statement, Armenia also returned the occupied Aghdam, Kalbajar and Lachin districts to Azerbaijan.

The cartographic complications on the Armenia-Azerbaijan state border have surfaced following the victory of Azerbaijan in the 2020 war as a result of which the Azerbaijani army restored control over a large portion of the border with Armenia.

The Azerbaijani government stationed units of the Armed Forces and State Border Service within the border regions, including in Kalbajar and Lachin to strengthen border protection. However, this move sparked a backlash from the Armenian side in May 2021. Yerevan has then blamed Azerbaijani forces for the so-called “encroaching” on Armenia’s territory.

Since then, provocations against the Azerbaijani army by the Armenian military have been common, resulting in serious complications on the frontier. Baku has been calling for the immediate start of the delimitation and demarcation process as it seeks to ease tensions with Yerevan. This process is contained in five basic principles submitted by the Azerbaijani government to Armenia for normalization and establishment of lasting peace.

The European Union mediated four meetings between the Azerbaijani and Armenian leaders to expedite the normalization process, which involves peace talks, border delimitation and the reopening of transport links.

The talks in Brussels produced an agreement between President Ilham Aliyev and Armenian Prime Minister Nikol Pashinyan on advancing discussions on a future peace treaty. In their last meeting on August 31, they agreed to task foreign ministers of both countries to start working on draft texts of the peace treaty.