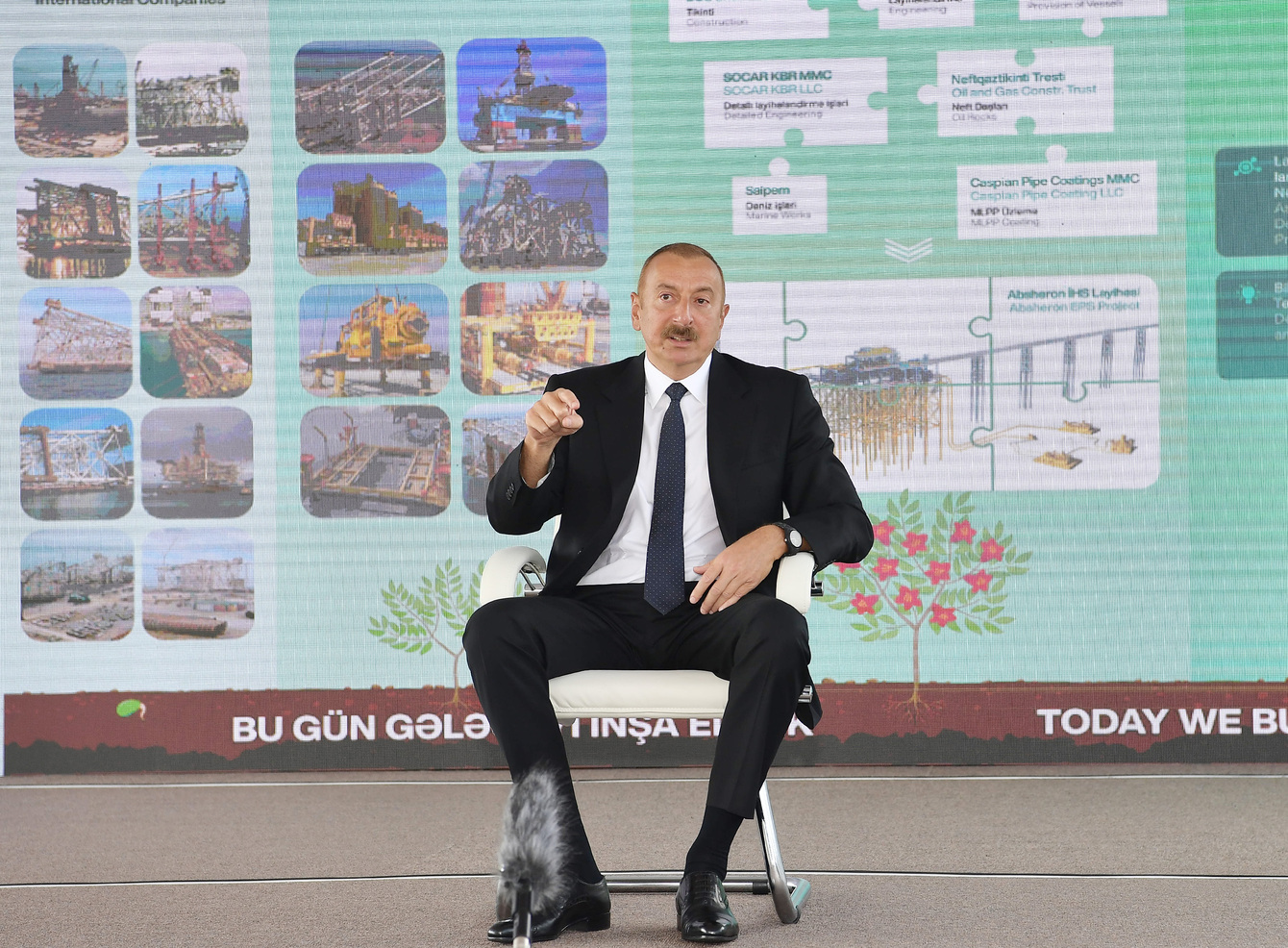 President Ilham Aliyev of Azerbaijan sat for an interview with local TV after attending the groundbreaking ceremony of the offshore operations of the Absheron gas field in the Caspian Sea, September 19, 2020, Baku, Azerbaijan / President.Az

In a recent interview, Azerbaijan's President Ilham Aliyev shared his views on Nagorno-Karabakh negotiations between Armenia and Azerbaijan and casts his doubts over prospects of finding a solution to the decades-old conflict.

"Negotiations are virtually non-existent. I have said that we will not participate in negotiations for the sake of their imitation," President Aliyev said on Saturday. "It does not mean that we are refusing to negotiate. It means that we do not want to join Armenia's cunning policy. The Armenian leader has disrupted the negotiations process. He is not disrupting it but has already disrupted it."

Azerbaijani president gave a broader insight into certain aspects of the Nagorno-Karabakh conflict with the main focus on Armenia's provocative actions, illegal settlement policy and disregard of international law, which he said, led negotiations to a deadlock. President Aliyev recalled Armenian Prime Minister Nikol Pashinyan's "Karabakh is Armenia" remarks and his proposal for adding the separatists in the occupied Azerbaijani lands as a party to the talks.

On August 5, 2019, Pashinyan traveled to the occupied Azerbaijani lands where he addressed a speech to provoke mass hysteria over the nationalist "miatsum" - "unification" chant, a notorious separatist slogan that accompanied the rise of the anti-Azerbaijan sentiments in Armenia in the late 1980s and early 1990s.  Armenia's premier has obviously called for annexing Azerbaijan's Nagorno-Karabakh region to Armenia by saying "Artsakh [the name Armenia uses for Karabakh] is Armenia. Period."

Pashinyan pursues a double-headed policy around the Nagorno-Karabakh conflict. Although he tries to portray Azerbaijani lands as Armenia's, Pashinyan also insists that the illegal separatist regime deployed in the occupied Azerbaijani lands should participate in the Armenia-Azerbaijan talks as a separate party. The proposal is listed among seven "conditions" set forward by the Armenian prime minister in July.

President Aliyev said such developments demonstrate the fact that Armenia has withdrawn from the talks and fuels tensions by building illegal settlements.

"It contravenes every international convention. These actions are entirely contrary to the Geneva Convention. It amounts to a crime," President Aliyev said. "It is a crime to bring people to the occupied territories and settle them there illegally. The Pashinyan regime is doing this consciously. It is a provocation against us. Armenians post it on the Internet – some Lebanese Armenian family has arrived and is doing something there."

The government of Armenia has intensified the illegal settlement of the occupied Azerbaijani territories by Lebanese Armenians after the explosion in the port of Beirut on 4 August. A day after the tragic event, self-styled "representatives" of the illegal separatist regime in Azerbaijan's Nagorno-Karabakh region announced their readiness to accept 100-150 Armenian families from Beirut. Three Lebanese families were already brought to Shusha, an Azerbaijani city that was occupied by Armenia in 1992.

Armenia grossly violates the international humanitarian law, as well as the Geneva Conventions of 1949 and its additional protocols by such illegal settlements, which has already been recorded in the reports of the OSCE fact-finding missions.

The western Tovuz region of Azerbaijan on the border with Armenia saw the latest armed clashes between the two states far from the main conflict zone in the Nagorno-Karabakh region of Azerbaijan. The fighting started on July 12 with Armenia's forces shelling Azerbaijani positions. Over the four days until July 16, the war claimed lives on both sides. Azerbaijan lost 12 servicemen, including one general. Moreover, one civilian fell to Armenia's mortar fire during the clashes.

Although Armenian authorities claimed their loss to be four, the civil society has adamantly denied official reports, which they believe hide the true death toll over 30.

"Nagorno-Karabakh is our ancient and historical land, and we will return to these lands. We will restore all destroyed historic sites and houses. We will give the streets Azerbaijani names and return the renamed villages their real names. We will certainly do that because the truth is on our side," President Aliyev said.

"We do not lay claim to other countries' lands, but we will not give our lands to anyone either. Present-day Armenia was established on historically Azerbaijani lands. There are sufficient historical documents to corroborate that. We will never allow for the creation of a second Armenian state. Karabakh is ours, Karabakh is Azerbaijan!"