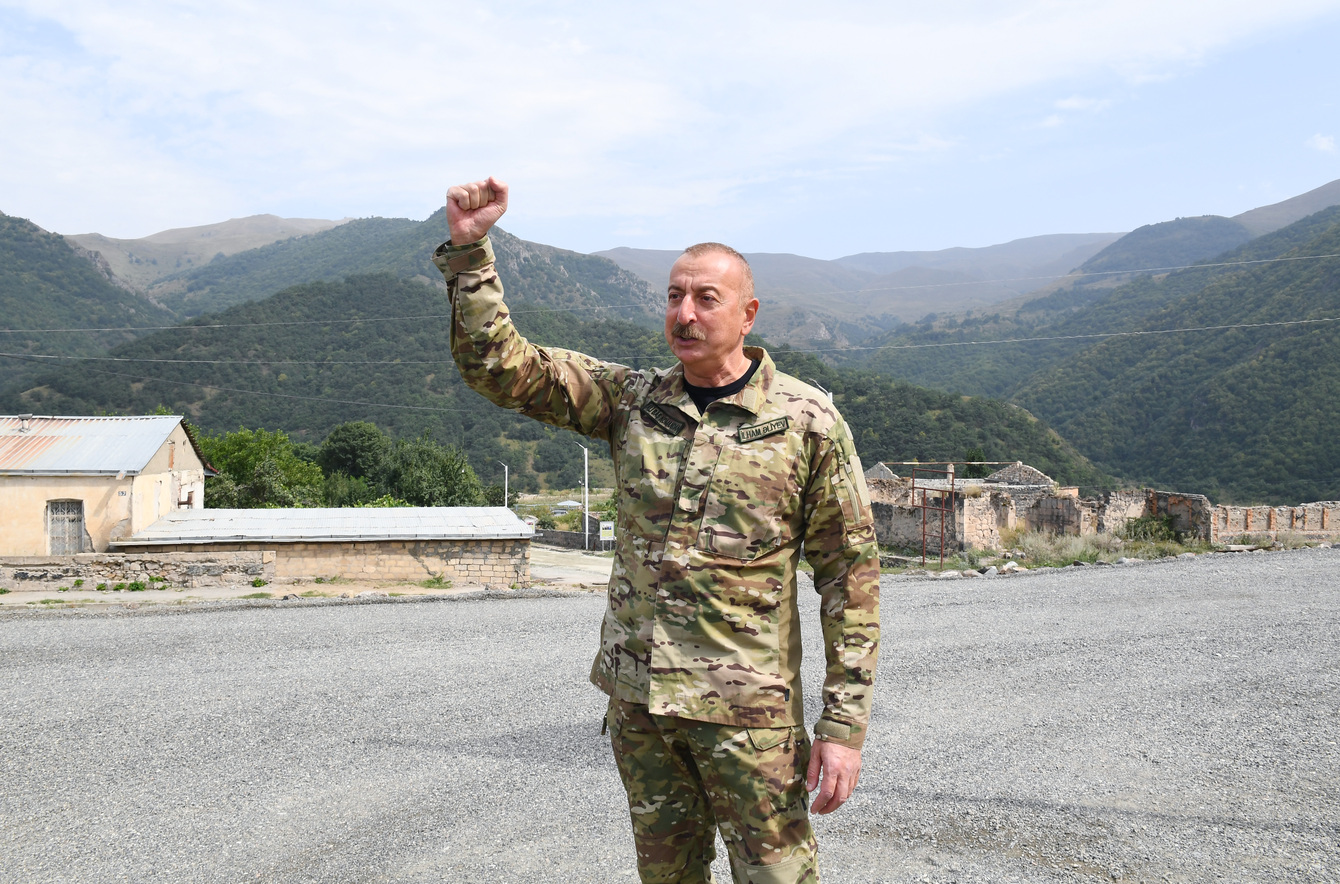 President Ilham Aliyev visited the Kalbajar and Lachin districts of Azerbaijan on August 16, 2021. Both districts have been liberated from Armenia's occupation as a result of the last year's successful 44-day counterattack operations of the Azerbaijani army in the Karabakh region / President.Az

President Ilham Aliyev has said that ancient Azerbaijani regions and settlements located in the territory of present-day Armenia should be called by their original names.

The statement was made during his visit to the East Zangazur region of Azerbaijan on August 16.

In his address, President Aliyev spoke about how the Armenians replaced the historical Azerbaijani toponyms in the territory of modern-day Armenia, mentioning the Basarkechar region and the villages of Arazdayan and Zod. He further called on journalists and the general public to use original names when referring to the historical Azerbaijani regions and settlements located in present-day Armenia.

The president added that the absolute majority of the Basarkechar district's residents were Azerbaijanis.

“Only in June 1969, Armenia renamed Basarkechar district to Vardenis. I ask that the name Basarkechar, not Vardenis, be restored to our general lexicon when reports are prepared from this region of Azerbaijan,” he said.

President Aliyev further mentioned the villages of Arazdayan and Zod in Armenia, saying that these settlements should also regain their historical names in media reports and general public use. Arazdayan and Zod, which are currently called Yeraskh and Sotkh in Armenia, have initially been populated by ethnic Azerbaijanis before they were deported.

Today the Basarkechar district is located in the territory of present-day Armenia and borders the Kalbajar district of Azerbaijan.

The Basarkechar district was officially founded in 1930 as part of the Armenian SSR and retained its original name until it was renamed Vardenis in 1969. Still, Azerbaijanis lived on this territory long before that. Researchers say the history of Basarkechar goes back at least two thousand years, mentioning Oghuz Turks as its ancient settlers. In documents of the 16th century, Basarkechar is mentioned as one of the largest settlements of the Safavid Empire of Azerbaijan, the state that existed in 1501-1736. According to the “Review Book of Iravan Province,” published in 1728, Basarkechar village was populated exclusively by Turks.

There are different versions of the Basarkechar toponym origin. There is a popular version that Turco-Mongol conqueror Timur, who founded the Timurid Empire, once captured this place, but the locals could regain control of the village after a while. After that, the village was named “Basarkechar,” meaning “attacked and advanced.” The other legend dating back to the 10th-11th centuries, says that initially, this toponym had the form of “Basatkechen.” According to this version, Basarkecher owes its name to Oghuz hero Basat who had once passed through the settlement.

Member of the Azerbaijani Parliament, Doctor of Historical Sciences, Prof. Musa Gasimli, says 266 Turkic toponyms in modern-day Armenia have been renamed and armenianized over the past 90 years.

“Because Armenians are not the region’s indigenous population, the toponyms in the territory of present-day Armenia are fictitious and have no historical and ethnocultural roots,” Gasimli said in an interview.

“The renaming of local, indigenous Azerbaijanis’ settlements in Armenia was carried out according to the following scheme: Armenians were brought in from abroad and settled there, while Azerbaijanis were evicted in times of crisis, and then toponyms were changed under official decisions,” he added.