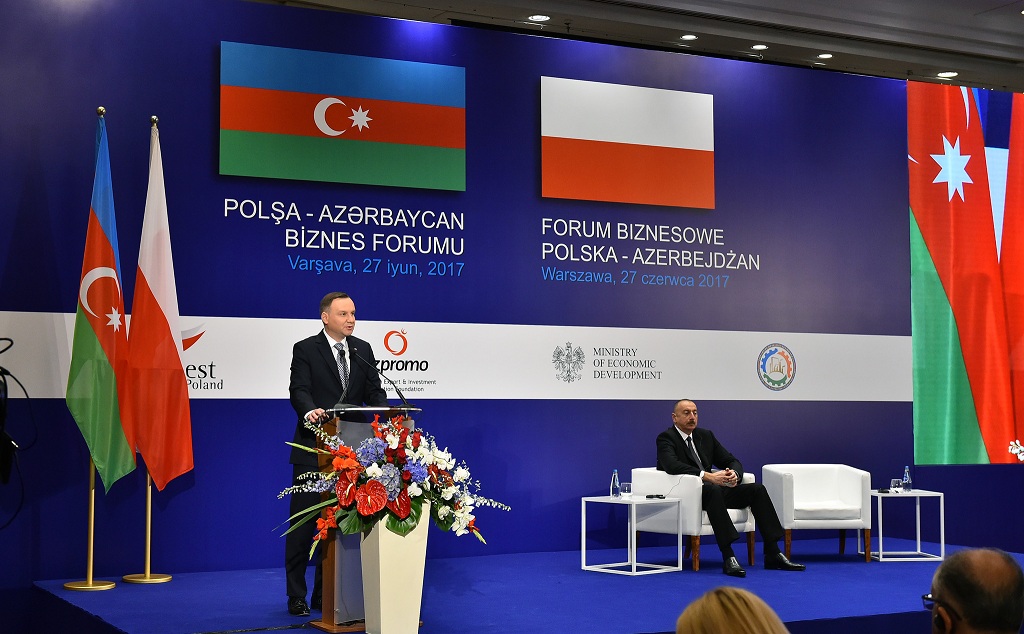 Azerbaijan’s President Ilham Aliyev paid an official three-day visit to Poland this week to deliberate a wide range of issues of bilateral collaboration, including political and economic cooperation, energy and transport partnership at high-level meetings with top Polish officials in Warsaw.

“Azerbaijan is an important partner of Poland in the region of the South Caucasus and the Caspian Sea,” Poland’s President Andrzjey Duda said at a gathering of 150 business persons, including 60 from Azerbaijan, on Tuesday. “From this standpoint, we attach special importance to strengthening economic cooperation with Azerbaijan.”

In what was his second official trip to Poland, Aliyev met with his counterpart Duda, Prime Minister Beata Szydło and Polish Senate Marshall Stanislav Karchevsky.

Poland sees Azerbaijan as a potential market and a gate to Central Asian, Indian and Iranian markets for its exports of machinery, electronic equipment, vehicles, furniture, and plastics. In 2016, Asian markets received only 6.3 percent of Poland’s $196.5 billion in exports, whereas Europe, including Azerbaijan, absorbed 87.6 percent of Polish goods. North America and Africa together accounted for 4.7 percent of the country’s exports.

Azerbaijan, in turn, mainly supplies Poland with energy resources, namely oil and oil products. In 2008, Baku for the first time achieved a positive trade surplus with Poland by pushing its bilateral trade volume to $170 million.

“In 2016, our trade turnover amounted to approximately $100 million. We have come to the conclusion [with President Aliyev] that it is necessary to open our economies even more to each other and act from a unified position at the international level,” President Duda said at the Azerbaijan-Poland Business Forum.

In 2016 Poland was ranked as the largest economy in Central Europe, with its 38 million strong consumer market and a gross national income of $12,400, according to World Bank statistics. In the EU, Poland comes in at number six for its economic strength among 28 member countries. Its economy attracted over $11 billion in foreign direct investment (FDI) in 2016, also generating nearly $186 billion in FDI stock that same year. Some analysts say the Polish economy will be amongst the G-20 economies by 2022.

Azerbaijan, located at the crossroads of Europe and Asia, is part of the largest East-to-West and South-to-West transportation routes, forming linkages between markets in Europe with those in China and India, making the Caspian littoral state an attractive locale through which for Poland can push its goods eastward.

In a press conference on Tuesday in Warsaw, President Duda said Poland wants to establish a direct railway connection with Azerbaijan, passing through Ukraine and Georgia, so it can have greater access to Iran and India, and plug into broader trade networks.

“For many years Azerbaijan has been working on the creation of transport corridors, and all of the necessary transport infrastructure has already been created,” President Aliyev said at the business forum. “We have a railway connection with all the neighbors in the northern, southern and western directions.”

Azerbaijan is poised to be a game-changer in Europe’s energy security due to its vast oil and gas reserves beneath the Caspian Sea. The Southern Gas Corridor project, valued at $45 billion, aims to transport Azerbaijani natural gas from the largest offshore gas field in the Caspian Sea, known as Shah Deniz, to European consumers via Georgia and Turkey. After the corridor comes online, European countries, including in Poland, will receive 16 billion cubic meters of gas per year.

“Azerbaijan is already a reliable partner in the supply of oil to European markets," Aliyev said.

Although Baku formalized official ties with Warsaw in 1992, after the collapse of the Soviet Union a year earlier and the formation of the modern Azerbaijani state, bilateral relations also existed during the time of the Azerbaijan Democratic Republic, which lasted from 1918-1920, when Azerbaijan first saw independence following the demise of imperial Russia. Some historians, however, consider the rule of Polish King Władysław II Jagiełło in the 15th century to be the genesis of relations between the people of modern-day Azerbaijan and Poland, as Jagiełło had forged ties with the Turkic ruler Uzun Hasan.