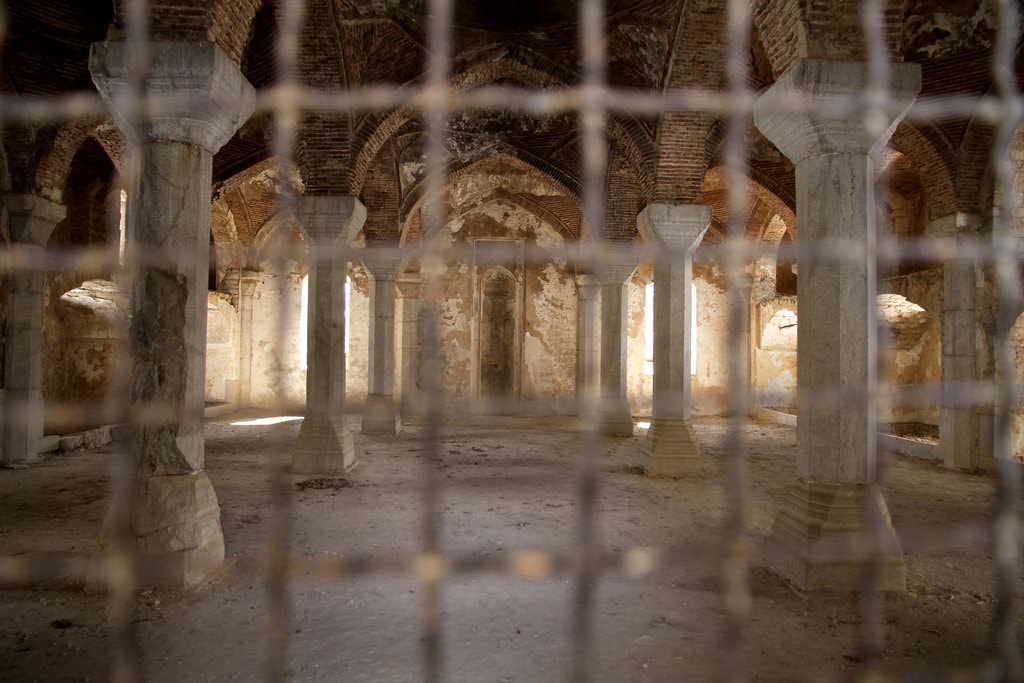 A view through a gate of the Upper Govharagha Mosque in Shusha, used by Azerbaijanis before the occupation of the city in 1992 / Seth Kugel / New York Times

Armenia’s Prime Minister Nikol Pashinyan paid a controversial visit to the occupied Nagorno-Karabakh region of Azerbaijan on Monday to open what are being billed the “pan-Armenian games.” He made headlines in the region by reviving the slogan miatsum, meaning “unite” in the Armenian language, which ultimately led to a bloody war with neighboring Azerbaijan after the breakup of the Soviet Union in the early 1990s.

As part of the speech Pashinyan delivered in Khankendi city, the regional center of Azerbaijan's Nagorno-Karabakh region, which has been occupied by Armenia since the early 1990s, the Armenian prime minister openly referred to the region as part of Armenia – a taboo for Azerbaijanis, as the region is an internationally recognized as part of the sovereign territory of Azerbaijan.

Miatsum is a loaded word for Azerbaijanis, as it was used by the Armenian nationalists and military during the full-scale war that lasted from 1991 until a ceasefire agreement in 1994. As a result of the war, Armenia forcibly occupied 20 percent of Azerbaijan's internationally recognized territory, which includes the Nagorno-Karabakh region and seven adjacent districts. The war claimed the lives of over 30,000 Azerbaijanis and expelled one million more from their homeland.

Elkhan Shahinoglu, a political analyst in Baku, says Pashinyan crossed a red line on Monday when he used the word, saying it is an obvious and deliberate deviation from diplomatic talks held over the past year that are aimed at solving the Nagorno-Karabakh conflict.

“[Pashinyan’s] address increased the likelihood of [Yerevan’s] refusal of actual negotiations, the intensification of ceasefire violations, and the war with Azerbaijan,” Shahinoglu told Caspian News.

“With his speech in Khankendi, Pashinyan drew a line on the verbal arrangements that were achieved prior to this, leaving neither the Prague Process nor the Madrid Plan on the table,” he said, referring to two mechanisms for which a peaceful resolution to the conflict have been developed.

Shahinoglu said international organizations should be concerned with Pashinyan’s words and weigh in on the matter.

Talks between Armenia and Azerbaijan for finding a durable end to the conflict have not yet yielded positive results, despite international mediation by the OSCE Minsk Group that is co-chaired by the United States, Russia and France, as well as four legally binding resolutions by the UN Security Council that call for the full withdrawal of Armenian forces from the occupied Azerbaijani regions.

Nikol Pashinyan, a former journalist that came to power in the wake of a revolution last April, called for a change in the format of talks so that the self-appointed illegal separatist regime in the Nagorno-Karabakh region could be part of the negotiations. Pashinyan has repeatedly said that he can only speak on behalf of Armenia, while the interests of Armenians living in the Nagorno-Karabakh region should be represented by the separatist regime, which Baku does not see as legitimate and is not recognized by any country.

Alexander Saveliev, a member of the expert council of the Russian State Duma Committee on Commonwealth of Independent States Affairs, Eurasian Integration and Relations with Compatriots, says Pashinyan’s words on Monday are evidence of incompetence and contention within his government.

“It was just said about an attempt to form a tripartite negotiation team with the participation of Armenia, Azerbaijan, and Karabakh Armenians,” Saveliev said in an interview with Media.az. “But, as soon as they remembered the Azerbaijanis of Karabakh, the initiative was gone, and the Yerevan authorities have already called Karabakh [part of] Armenia.”

“Unfortunately, now the Armenian side is undermining the peaceful settlement [of Nagorno-Karabakh conflict]. “Saying ‘Karabakh is Armenia. And that’s all’, shows it quite eloquently.”