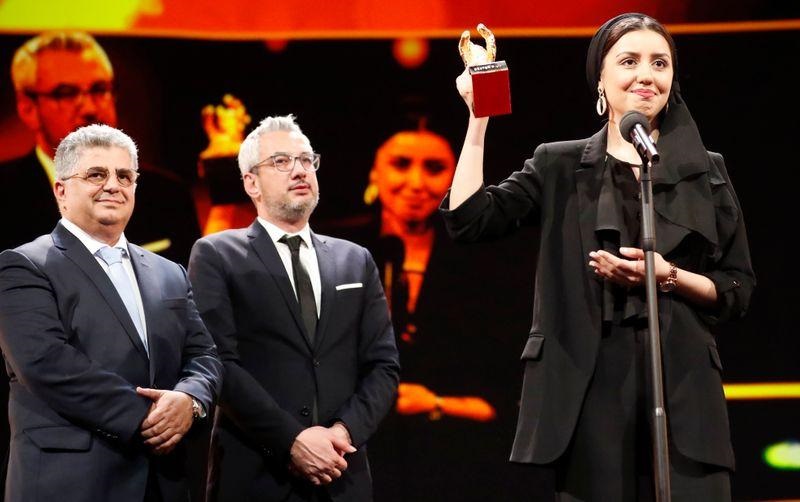 Director Mohammad Rasoulof's daughter Baran Rasoulof, producers Kaveh Farnam and Farzad Pak accept the Golden Bear for Best Film for "There Is No Evil" during the awards ceremony at the 70th Berlinale International Film Festival in Berlin, Germany, February 29, 2020. / Reuters

Iranian director Mohammad Rasoulof won the top prize at the Berlin Film Festival for his secretly-produced film about the death penalty in the Islamic Republic of Iran.

Rasoulof didn’t attend the February 29 ceremony to receive the Golden Bear award for the film titled “There Is No Evil,” which “tells four stories loosely connected to the use of the death penalty in Iran and dealing with personal freedom under tyranny,” according to a report by Associated Press.

He produced the film, despite being forbidden to do so by the Iranian government. Rasoulof's daughter, Baran, accepted the Golden Bear on his behalf.

The Iranian director was reportedly sentenced to a year in prison in 2017 for being a prominent critic of the government, and is barred from leaving Iran. He has also been banned by the authorities from making films for life.

The jury president, British actor Jeremy Irons, hailed the way the film showed “the web an authoritarian regime weaves among ordinary people, drawing them towards inhumanity,” noting that the film’s lessons about individual responsibility went far beyond Iran, Reuters reported.

Addressing a news conference via a mobile phone held by his daughter, Rasoulof explained that the film was about “people taking responsibility.”

“I wanted to talk about people who push responsibility away from themselves and say that the decision is taken by higher powers,” he said. “But they can actually say no, and that's their strength.”

In 2011, the year he won two prizes at Cannes with his censorship-themed “Goodbye,” Rasoulof was sentenced with fellow director Jafar Panahi to six years in prison and a 20-year ban on filmmaking for alleged anti-government propaganda. Rasoulof’s sentence was later suspended and he was released on bail. In 2017 Iranian authorities confiscated Rasoulof’s passport upon his return from the Telluride Film Festival where his “A Man of Integrity,” about corruption and injustice in Iran, had screened.