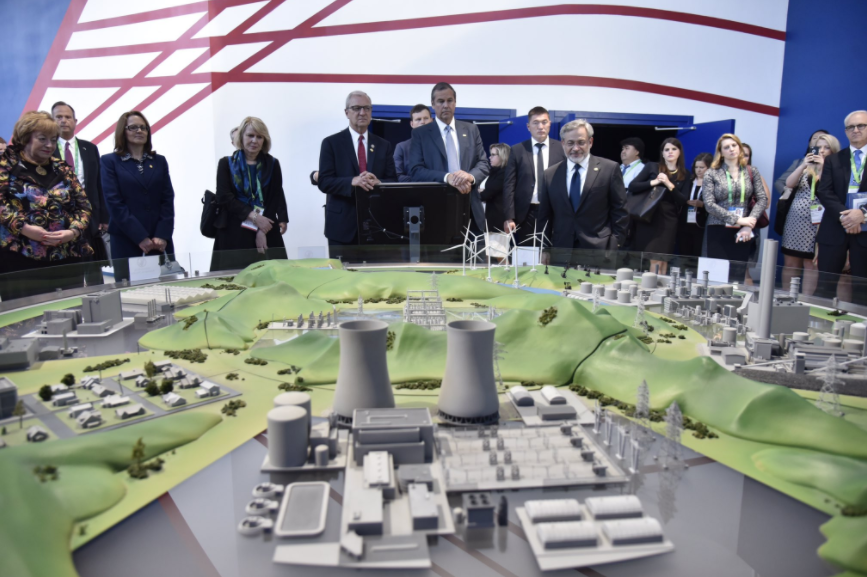 The US delegation while visiting American pavilion at the Expo-2017 specialized exhibition in Astana. / USKZBA

While renewable energy resources are all the rage these days, the United States and Kazakhstan remain strong partners when it comes to nuclear energy and security.

US Deputy Secretary of Energy Dan Brouillette met with Kazakhstan’s Energy Minister Kanat Bozumbayev, as part of a two-day American delegation during the last week of August that included Congressman Kevin Cramer (R-ND), President and CEO of the Overseas Private Investment Corporation Ray Washburne, and Lisa Curtis, Deputy Assistant to the President and Senior Director for South and Central Asia at the National Security Council.

“While recognizing its importance as a source of electricity with zero emissions and basic electric load, the US and Kazakhstan will work together to promote civil nuclear power,” Brouillette said at a press briefing following his meeting on August 28 with Bozumbayev.

Brouillette, who was standing in for US Secretary of Energy Rick Perry, said the two sides would work together to reduce the level of carbon emissions, the utilization and storage of combustion products, the stability of pipeline networks, the opening and expansion of energy markets, and nuclear non-proliferation and security.”

Perry was forced to cancel his trip to Kazakhstan due to Hurricane Harvey, a tropical storm that ripped through Texas, where Perry served as governor from 2000-2015.

Brouillette’s visit came as EXPO 2017, a modern-day world’s fair being hosted in Astana, is winding down. The expo, which has energy technologies and the future of energy resources as its theme, opened on June 10 and closes September 10.

Energy-rich Kazakhstan is of increasing global importance, and its relationship with the US is no exception. In 2001, the US and Kazakhstan launched the Energy Partnership Commission, aimed at coordinating cooperation in nuclear security, hydrocarbon resources, renewable energy, energy efficiency and electric power. Washington helped Astana to reorganize a bowling water reactor (BWR), the second most common type of electricity-generating nuclear reactor after the pressurized water reactor, based at the Institute of Nuclear Physics, near Kazakhstan’s former capital city of Almaty. The BWR had used highly enriched uranium instead of low enriched uranium, meaning its fuel could be used for nuclear bombs.

American and Kazakhstani scientists are working to change over the country’s other two BWRs, which still operate using highly enriched uranium as their fuel source.

“Within the Partnership Commission, training seminars were held on nuclear reactor development technologies. Also, Kazakhstani scientists took part in a seminar held at the Idaho National Laboratory to discuss possible areas for future cooperation,” Brouillette said during his visit.

The American delegation’s trip to Kazakhstan also coincided with the opening of the world’s first low enriched uranium bank on August 29. Located in the northeastern city of Oskemen, close to Kazakhstan’s border with Russia, the bank contains 90 metric tons of low-enriched uranium, suitable to make fuel for a light water nuclear reactor. Countries that make withdrawals from the bank will be those that lack enrichment facilities. The idea behind the $150 million project is to convince such countries to not to build their own.

Technically owned and managed by the International Atomic Energy Agency, the project has the backing of the US and Kazakhstani governments. It received funding from the Nuclear Threat Initiative, as well as $50 million from the American businessman and philanthropist Warren Buffett.

“The IAEA fuel bank is an investment in a safer world and an essential tool in reducing nuclear dangers. I believe that the fuel bank will help reduce the risk of enrichment proliferation globally,” Buffet said in a statement released by the Nuclear Threat Initiative, when he wrote his check in 2010. “It will be a pleasure to write a check for funds that will help reduce global dangers.”

It is no coincidence Kazakhstan is housing the project. The country holds 12 percent of global uranium resources, and is one of the world’s leading uranium producers.

At the same time, Kazakhstan is a staunch supporter of global nonproliferation efforts. It is a signatory to the Nuclear Non-Proliferation Treaty, the Comprehensive Test Ban Treaty and the Central Asian Nuclear Weapon Free Zone, promoting nuclear disarmament, non-proliferation, as well as control, accounting and physical security of nuclear material.