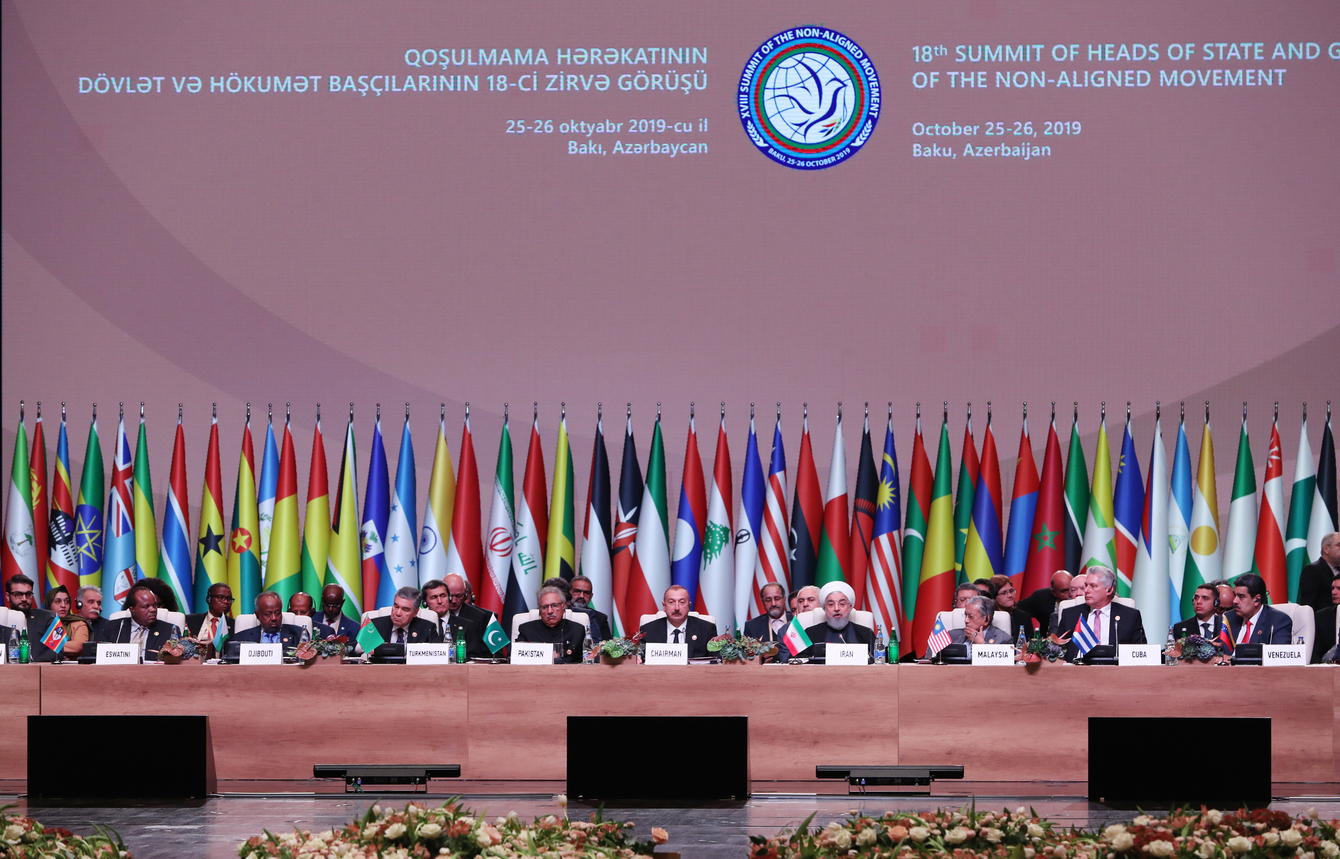 Heads of the state and government from 120 countries attended the 18th Summit of the Non-Aligned Movement in Baku, October 25, 2019

Nations around the globe recognized the forcible occupation of Azerbaijani lands and the violation of the Caspian country’s territorial integrity by Armenia on the sidelines of the Summit of the Non-Aligned Movement, held in Baku last week.

Heads of state and government acknowledged the aggressive actions of one former Soviet republic against another, as representatives from 120 countries signed a statement at the conclusion of the summit on October 26 that reaffirmed the inadmissibility of the occupation of territories by force and confirm that no state will recognize the legitimacy of the situation arising from the occupation of the territories of Azerbaijan.

The Non-Aligned Movement was formed in the 1960s during the Cold War, when nations felt forced to choose between siding with one of the world’s two superpowers: the United States or the Soviet Union. Non-Aligned Movement members, however, refused to be officially aligned with or against either.

As of 2018, the movement had 125 members and 25 observer countries. Azerbaijan’s President Ilham Aliyev currently serves as the Non-Aligned Movement’s Secretary-General, a position he took over during the summit and will hold until 2022.

Speaking at the summit, President Aliyev said that during his chairmanship he will work towards the priorities established under the Bandung principles, named after the city in Indonesia where, in 1955, 29 governments from Asian and African countries gathered. There they agreed to mutual respect for sovereignty, non-aggression, non-interference in internal affairs and equality.

President Aliyev said the principles match the priorities and foreign policy of the government in Baku.

“We must intensify our efforts to ensure compliance with the norms and principles of international law,” President Aliyev said in his speech. “In this regard, there is a great need for reforms in the activity of the UN. Changing borders by force, violating the territorial integrity of countries by force, and interfering in internal affairs is inadmissible.”

“Nagorno-Karabakh, the historic land of Azerbaijan, and seven surrounding districts – around twenty percent of the internationally recognized territory of our country has been under Armenia’s occupation for more than twenty-five years,” the president explained.

“The four resolutions adopted by the UN Security Council in 1993 required the complete and unconditional withdrawal of Armenian troops from the territory of Azerbaijan. Unfortunately, these resolutions have not been implemented. Sometimes Security Council resolutions are implemented within a few days. Sometimes it remains on paper for 26 years, as it does in relation to the conflict that Azerbaijan is facing. The policy of these double standards should be stopped.”

The Nagorno-Karabakh conflict, as it is known, has been a gray cloud over the Caspian and South Caucasus regions since the breakup of the Soviet Union in 1991. Following the occupation of Kalbajar, a district in Azerbaijan that lies along the border with neighboring Armenia, on April 3, 1993, the United Nations Security Council adopted the first of four resolutions, calling for the cessation of hostilities and withdrawal of Armenian troops from the occupied region and districts.

In that same year, three more resolutions followed, all calling for Armenian troops to leave the country, and all go unfulfilled to this day.

A member of the Azerbaijani parliament, Aydin Mirzazade, said the support Azerbaijan received last week from the non-aligned countries will strengthen Azerbaijan's position on the matter.

“Not only these countries, but also international organizations make statements on our territorial integrity and support us,” Mirzazade told Sonxeber.az. “We expect 120 countries to know Azerbaijan closely and to be aware of the Nagorno-Karabakh problem. Maximum efforts are being made to solve the Nagorno-Karabakh conflict. The Non-Aligned Movement's support for Azerbaijan in this regard will further increase our strength.”