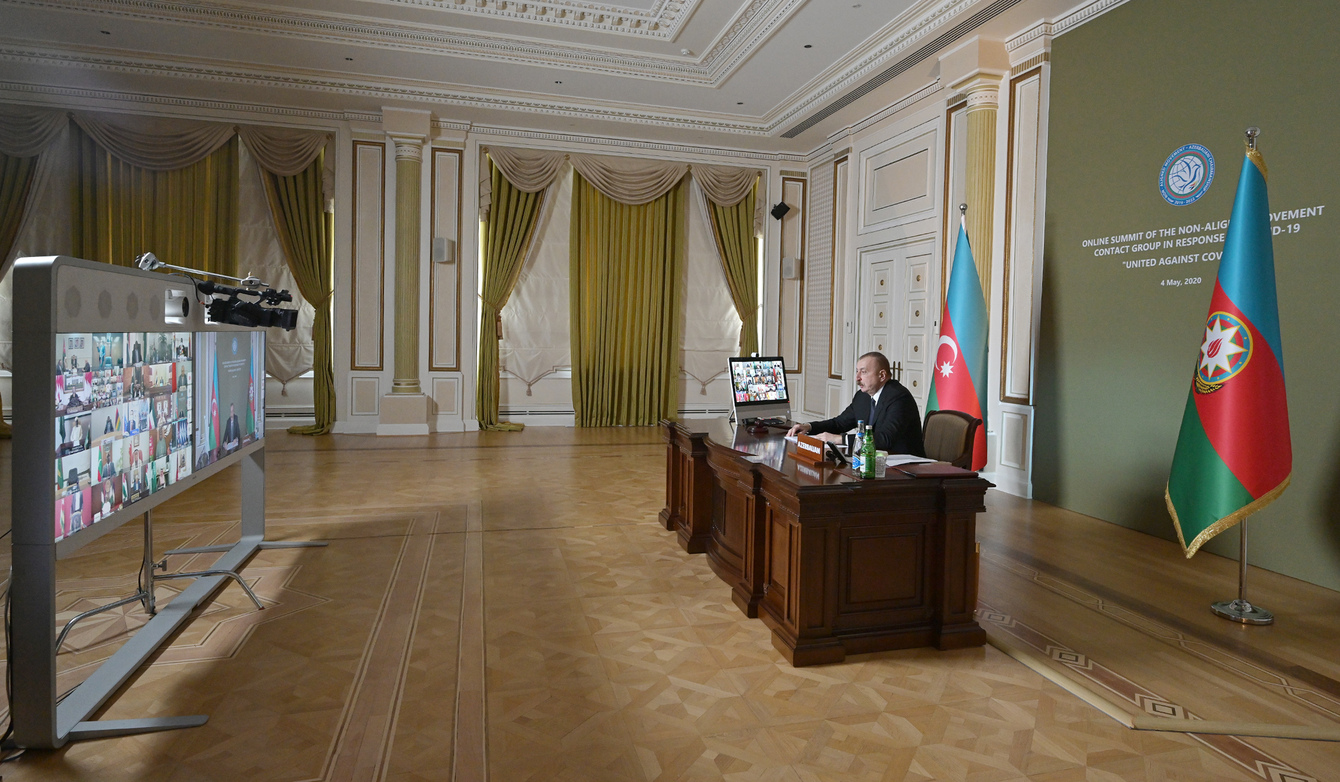 President Ilham Aliyev of the Republic of Azerbaijan presides over the online Summit of Non-Aligned Movement Contact Group, Baku, Azerbaijan, May 5, 2020 / President.Az

Government leaders from Non-Aligned Movement countries participated in a virtual summit on Monday where they pledged their commitment to implementing an effective global response to the COVID-19 pandemic.

Initiated by Azerbaijan’s President Ilham Aliyev, the United Against COVID-19 Summit was attended by over 40 top officials from around the world. The high-level meeting addressed ongoing efforts led by the United Nations and the World Health Organization and concluded with a call for international cooperation to control, relieve and defeat the pandemic by facilitating knowledge sharing and implementing best practices.

“In the conditions of the pandemic, it is important to maintain open trade between our countries and uninterruptedly carry out international cargo transportation,” President Aliyev said in a statement posted on the Azerbaijani President's official website, in which he described Azerbaijan as a vital link in achieving this goal thanks to its favorable geographical location between East and West, and North and South.

“Azerbaijan, as a reliable transit and logistical center responsibly treating its role in the pandemic, provides unhindered transit traffic through its territory," Aliyev noted, stressing the need for countries to exchange experiences, information and scientific knowledge in an effort to better contain the COVID-19 outbreak.

“As noted in the proposed Declaration of the Summit, the Working Group of the Non-Aligned Movement will add the humanitarian and medical needs of the participating countries related to the pandemic to the unified database. These data will then be presented to donor countries and international humanitarian organizations for the provision of feasible assistance,” he explained.

In the NAM Contact Group’s online meeting, President Aliyev spoke about the importance of providing assistance to the countries in need during the pandemic, and expressed Azerbaijan's strong commitment to this mission.

In March, Azerbaijan allocated $5 million to a WHO program assisting global anti-virus efforts.

Formed during the height of the Cold War, the Non-Aligned Movement (NAM) is an alliance of 120 countries in nearly all regions of the world. Member states account for a population of 4.3 billion people. The movement is considered to be the world’s largest political institution after the UN General Assembly, while its primary goal is to foster global peace, safety and development based on respect for international law.

Azerbaijan took over the chairmanship of NAM from Venezuela on a rotating basis at the Baku summit in October 2019 - a position that the Caspian country will hold until 2022.

More than 3.7 million coronavirus cases have been reported worldwide, according to an interactive COVID-19 world map launched by the American Johns Hopkins University, while fatalities reached 261,517 as of May 6. Azerbaijan has so far recorded 2,127 infections and 28 deaths from the virus. The total number of recoveries in the country stands at 1,536.

WHO President Tedros Adhanom Ghebreyesus said no country, regardless of its size, resources or financial resources, can fight the pandemic alone, meaning it requires full-fledged worldwide efforts.

During the NAM Contact Group Summit, UN Secretary-General António Guterres’ said in a video address that world leaders should ensure an effective response to COVID-19, and noted that the Non-Aligned Movement has a "critical role to play in forging global solidarity" in this regard as the alliance comprises of two-thirds of UN Member States.

Saudi Arabia, one of the NAM’s largest and wealthiest member countries, where COVID-19 has infected 31,938 and killed 209 people, vowed to stay committed to the global battle against the novel coronavirus. Speaking during the movement’s virtual summit on Monday, Saudi Foreign Minister Prince Faisal bin Farhan said the Saudi government has pledged $500 million to international organizations to address the impact of the virus, adding that the kingdom previously donated $10 million to the WHO to support anti-COVID-19 efforts.