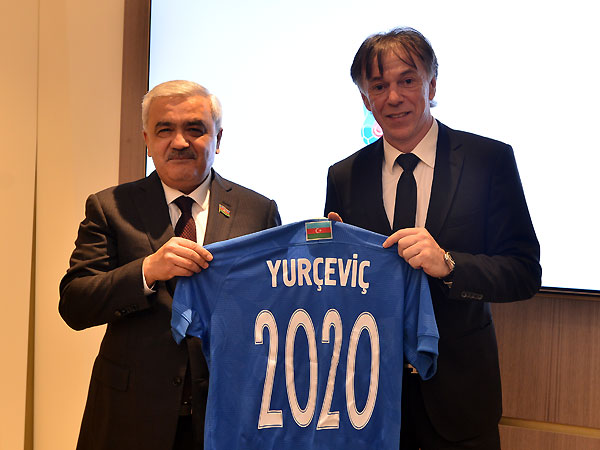 Nikola Jurčević will take charge as the next head coach of the national team after agreeing to a one-year contract. The agreement includes a clause that could extend his tenure for an additional two years. / AFFA

The Association of Football Federations of Azerbaijan (AFFA) announced at a meeting on Monday that the former Croatian football (soccer) star Nikola Jurčević will be leading the Azerbaijani national team, a position that has been vacant since December.

Jurčević will take charge as the next head coach of the national team after agreeing to a one-year contract. The agreement includes a clause that could extend his tenure for an additional two years.

Jurčević retired from football in 1999 to start his coaching career. He served as an assistant coach to the Croatian national football team’s manager Slaven Bilić from 2006 to 2012. Jurčević has led football teams including Russia’s Lokomotiv Moscow, Turkey’s Beşiktaş and the English Premier League participant West Ham.  His most recent job was the head coach for Dinamo Zagreb in Croatia.

At age 53, Jurčević is now focusing on preparing Azerbaijan’s national team for the upcoming Euro 2020 qualifiers.

“The main goal is to improve from game to game and to qualify for Euro 2020,” Jurčević said in a press conference at the Baku Olympic Stadium on Tuesday, according to Qaynarinfo.az. “We will fight for the European championship. I know, it's hard. But we will do our best.”

Azerbaijan will play against Croatia, Wales, Slovakia and Hungary in the Group E qualification stage for Euro 2020. The team will travel to Croatia for its first group game on March 21. The last match will take place in Slovakia on November 19.

“Yes, we have an away game with Croatia on March 21. I like attacking style of football. My philosophy is 90 minutes of focus on the game and correct tactical preparation. However, our tactical plan will be different against Croatia in the away match and Hungary at home,” Jurčević said.

The former midfielder for the Croatian national team will be the second Croatian professional football player to lead Azerbaijan’s national team, following in the footsteps of his former teammate Robert Prosinecki, who was in charge from 2014 to 2017.

Jurčević’s immediate predecessor, Gurban Gurbanov, left his post in an unexpected departure on December 8, terminating a six-year contract that went into effect in November 2017.