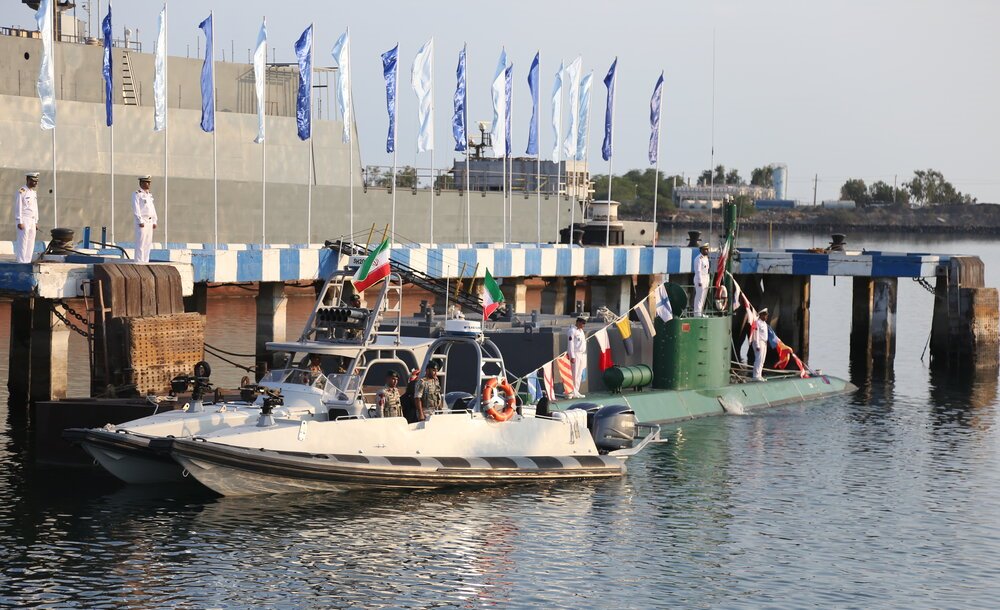 Alborz destroyer, Qadir 945 class submarines and two hard boats were added to Iran’s naval fleet in a ceremony held in the port city of Bandar Abbas, located in the southern province of Hormozgan, on December 3, 2019. / MEHR News Agency

New marine, submarine vessels and home-made ultralight planes have been delivered to the Iranian navy, concurrent with the Navy Week.

Three Chakavak training and reconnaissance aircraft were added to Iran’s naval fleet in a ceremony held in the port city of Bandar Abbas, located in the southern province of Hormozgan, on December 3, in the presence of Navy Commander Rear Admiral Hossein Khanzadi.

“Iran will save 195,000 euros (USD $216,000) by producing aircraft of this type,” Khanzadi said during the ceremony, adding that taking into account post-sale services and repair, outflow of foreign currency will be prevented by more than 2.5 times during a five-year period, the Islamic Republic News Agency reported.

Alborz destroyer, Qadir 945 class submarines and two hard boats were also integrated into the navy on Tuesday. The Alborz destroyer's mobility has increased significantly, its weapons have been upgraded and now it has more capability and stability, according to Khanzadi.

On November 30, navy officials announced the start of mass production of the indigenously-designed and submarine-launched Jask-2 cruise missile, during a ceremony to unveil new military products and projects, including a vertical takeoff and landing (VTOL) naval drone, dubbed Pelican-2.

Equipped with four motors for vertical movement and a powerful propeller, the drone can take off from cruising warships for patrol and reconnaissance missions, and it can land and float on water in an emergency.

Another product unveiled at the exhibition was a homegrown Inertial Navigation System (INS) used for detection and navigation of submarines below the surface, where the conventional GPS system is not applicable. The Iranian system, developed under the Soren project, has been manufactured with a special technology available to only a few countries.

The navy also put on display a project on a subsurface-to-surface Jask-2 missile system for submarines, which includes a combination of missiles, torpedoes, fire-control and communication gear.

Earlier, Khanzadi announced plans to manufacture new military vessels and submarines, saying the construction of Fateh-2 and Fateh-3 submarines are in rapid progress, adding that the 4th generation of the Iranian Fateh-class submarine would be equipped with much more advanced technologies than the previous models.

Speaking about a project to upgrade the homegrown destroyer “Damavand”, the commander said the new model will have two engine rooms and four engines, four-dimensional static phased array radars, as well as a vertical launching system for firing missiles. The new launching system will enable Damavand to carry more missiles stored below its deck and hit hostile missile launchers or intercept cruise projectiles with mid-range missiles.

Khanzadi also unveiled plans for the production of a homegrown vertically launched drone, saying the pilotless aircraft can take off from warships automatically and carry out patrol missions.

The Navy chief further noted that forces are manufacturing a new naval hovercraft as part of a project called Piroozan. The hovercraft will be equipped with two propellers and have a smaller radar cross-section and a lower height than the current models, but with the same weight and capacity. The new hovercraft will be furnished with folding missile launchers, sonar systems and torpedoes.