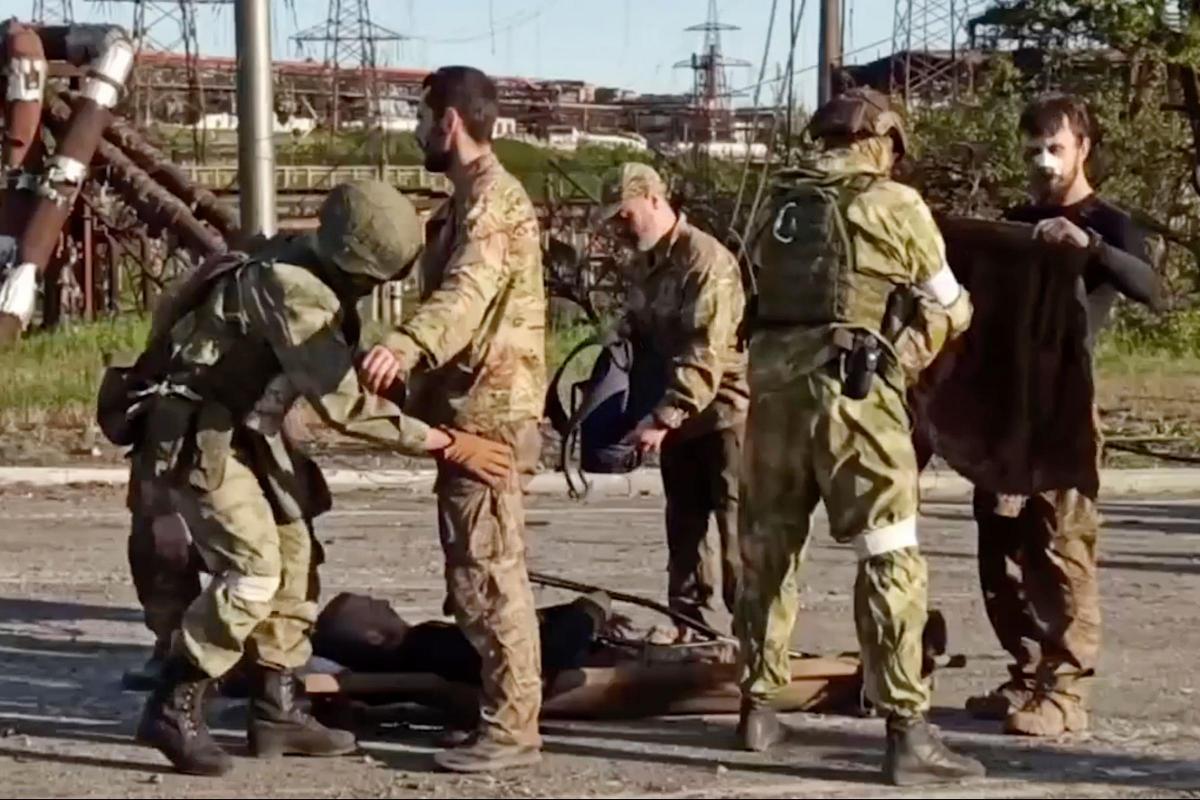 Russian servicemen frisk Ukrainian servicemen as they are being evacuated from the besieged Azovstal steel plant in Mariupol, Ukraine. / Russian Defence Ministry/AP

Russia’s defense ministry has announced that around 1,000 Ukrainian soldiers holed up inside the Azovstal steelworks in Mariupol had turned themselves over to the Russian side in a deal negotiated by the warring parties.

Speaking at a briefing on Wednesday, defense ministry spokesperson Igor Konashenkov said that in the last 24 hours, 694 fighters, including 29 wounded, laid down their arms.

He further said that 51 of the injured Ukrainian fighters who required in-ward medical assistance were transferred to hospitals in the nearby town of Novoazovsk in Russian-controlled territory in eastern Ukraine.

Denis Pushilin, who heads the so-called Donetsk People’s Republic, said that hundreds of fighters who have given themselves up did not include any commanders of the highest level.

The Russian Defense Ministry said it opened a humanitarian corridor from the Azovstal steel plant in Ukraine’s port city of Mariupol on Monday under the agreement reached with representatives of the Ukrainian military blocked at the plant.

Kyiv voiced a hope that the fighters extracted from the last bastion of resistance in Mariupol could be exchanged for Russian prisoners of war. But details of the agreement remain unclear, and the rhetoric coming from Moscow suggested an exchange could still be some way off.

Shortly after Russian President’s spokesman Dmitry Peskov promised that those who surrendered would be treated “in accordance with international standards,” Leonid Slutsky, a Russian lawmaker, offered to lift the moratorium on the death penalty for fighters from the Azov Battalion, calling them “animals in human form.”

For weeks, hundreds of Ukrainian troops remained holed up in a warren of tunnels and bunkers underneath the Azovstal iron and steelworks besieged by Russian forces. Ukraine’s Azov Battalion, which has led the defense of Mariupol, posted videos from the plant, saying they were left without much food or aid and soldiers were dying from their injuries.

The Soviet-era Azovstal plant is a major industrial complex with a labyrinth of tunnels and bunkers spreading across about 11 square kilometers (4 square miles) in the southeast of Mariupol. The city has been encircled since early March and is now mainly under the control of Russian forces. Control of Mariupol plays a strategic role for the Kremlin since, together with the separatist-controlled Donbas region, it would form a land bridge to the Crimea peninsula annexed by Russia in 2014.

On February 24, Russia launched an all-out offensive in Ukraine, claiming that the “military operation” was aimed to protect the people of the separatist-controlled Donetsk and Lugansk, allegedly being attacked by the Ukrainian military. In his televised address, President Putin told foreign countries not to interfere, saying it could lead to “consequences they have never seen.”