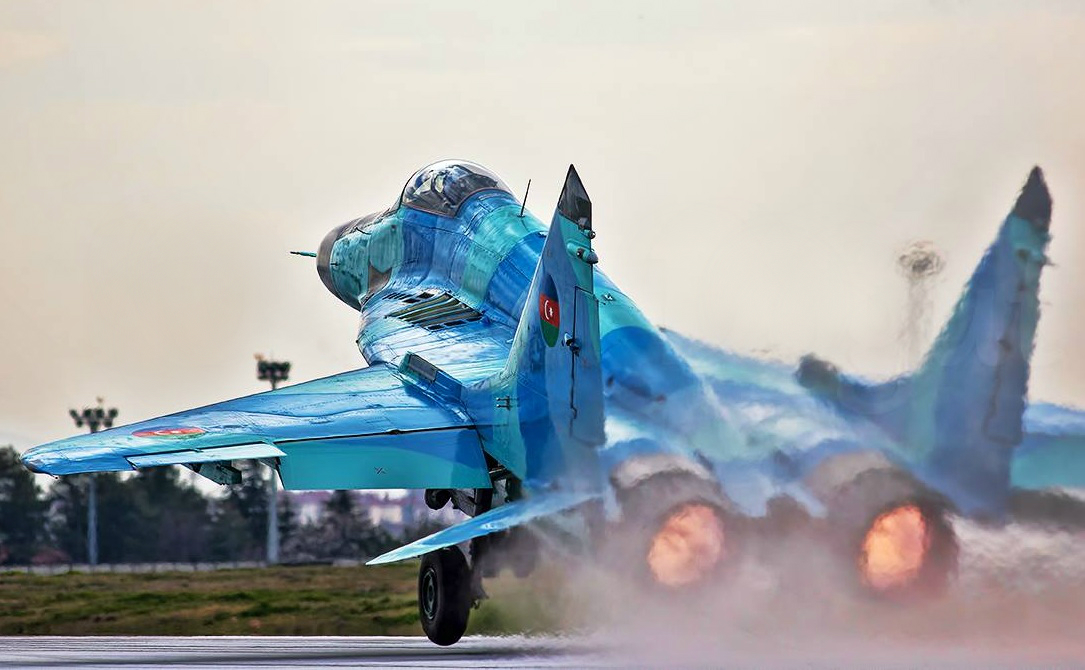 MIG-29 fighter jet of the Azerbaijan Air Forces. The Air Force of the country includes 18 fighter, 29 attack, and 19 trainer aircrafts, according to the Global Firepower Index 2017 / Cem Doğut

Azerbaijan’s air force is wrapping up a five-day training course with NATO’s Mobile Training Team, which began on September 4.

“Our cooperation with NATO, the world’s number one military bloc of great military powers, is helping develop the military of Azerbaijan,” Shair Ramaldanov, former head of the Azerbaijan Armed Forces Military Academy’s training corps, told Caspian News. “Azerbaijan is keen on having a developed military, and NATO contributions are of great importance in this regard.”

Azerbaijan’s military ranks 58 among 133 countries, and comes in at number four among the five Caspian region states in terms of strength. The air force includes 18 fighters, 29 attacks, and 19 trainer aircraft, according to the 2017 Global Firepower Index.

In May 2017, the defense ministry purchased a new generation M-346 trainer aircraft from the Italy’s Leonardo Aircraft Company. The M-346 is considered to be one of the best premium trainer aircraft available on the market, as it provides combat pilot training for front line fighters with high angle-of-attack capability.

“NATO-led training in Azerbaijan contributes to teaching our pilots the most modern skills and knowledge about things like how to control an aircraft according to NATO standards. This is essential for Azerbaijan’s military,” Ramaldanov told Caspian News.

Azerbaijan has been an active contributor to the 29-member military alliance since 1992 when the two sides established official relations. Azerbaijan joined the North Atlantic Cooperation Council, now the Euro-Atlantic Partnership Council, which provides the political framework for NATO’s cooperation with partner countries in the Euro-Atlantic area. The backbone of Azerbaijan’s uninterrupted cooperation with the alliance, however, was joining NATO’s Partnership for Peace program in 1994. An Individual Partnership Action Plan (IPAP) is agreed to every two years, which outlines specific activities and objectives to be met within the plan’s timeframe.

One of the requirements specified in each IPAP has been participating in NATO-led peacekeeping operations through deploying forces, search and rescue operation teams, medical aid, engineering assistance and helicopters. Azerbaijan’s armed forces have been part of missions in Kosovo (1999-2008), Iraq (2003-2008) and Afghanistan (2002-2014).

Azerbaijan was the only Caspian country, among 39 contributor nations, to NATO’s International Security Assistance Force (ISAF) mission in Afghanistan, meant to help the Afghan government build effective security capacity across the country to eradicate any terror threat. Nearly 100 servicemen from Azerbaijan were responsible for providing security to a television tower station in Kabul, a central ammunition depot, and conducting regular patrols. Since January 2015, the Azerbaijani peacekeeping contingent of 94 soldiers has been operating in Afghanistan under the Resolute Support Mission with the task of providing security of Kabul International Airport.

Russia created a military bloc called the Collective Security Treaty Organization (CSTO) in 1992, after the breakup of the Soviet Union, widely seen as an attempt to mitigate any western military influence in the Soviet sphere. While countries deep in Central Asia, like Tajikistan and Kyrgyzstan, have joined the alliance, some post-Soviet states geographically closer to Europe, including Ukraine and the South Caucasus neighbors Georgia and Azerbaijan, have steered away. Russia has invited Azerbaijan multiple times to join the alliance, but the offers were declined.

Shair Ramaldanov says Azerbaijan’s cooperation with NATO does not necessarily put a dent in Baku’s relationship with Moscow.

“Azerbaijan works with NATO to develop its military, but not to get on the nerves of some countries, including Russia,” Ramaldanov said. “I don’t see any negative impact of NATO-Azerbaijan collaboration on our ties with Russia. NATO cooperation matters only in terms of the military. It has nothing to do with politics.”